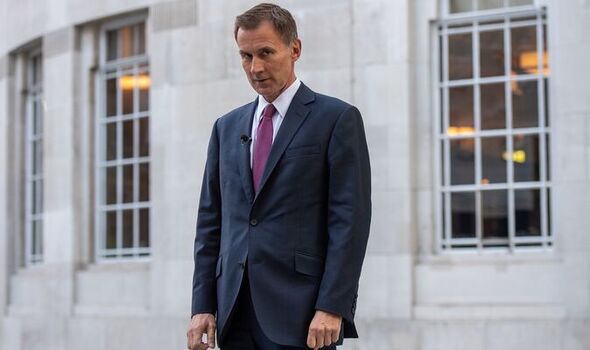 Jeremy Hunt has spent the past two days attempting to give reassurances he will raise taxes and cut government spending if necessary to balance the books. Traders were watching nervously to see if the Bank of England’s withdrawal of support for the gilt market on Friday would affect the cost of government borrowing and the value of the pound.

Their first clue as to which way markets will head is the overnight trade in the pound sterling in Asia followed by the gilt markets opening at 8am.

The UK stock market closed relatively flat for the day on Friday but in the US the S&P 500 and Nasdaq Composite indices closed down two per cent and three per cent respectively.

Russ Mould, investment director at stockbrokers AJ Bell, said: “The Chancellor has certainly been ‘on message’ so far – but it is impossible to tell which way markets will go.

“Some of the problems that face the UK are very global in nature – such as inflation, record debt, rising rates, risk of recession plus energy bills – and none of those are going away. From a stock market perspective, fresh dives in the S&P 500 and Nasdaq Composite in the US on Friday will not help.

“But FTSE Futures are showing down only 0.67 per cent. Hopefully, markets will become more rational and more calm.”

Fears of a potential crash came as analysts at investment bank Goldman Sachs downgraded Britain’s economic outlook while a leading economic forecaster predicted the British economy would shrink by around 0.2 per cent each quarter from this month through to June next year.

The investment bank revised its UK economic output forecast for next year to a one per cent contraction from an earlier forecast of a 0.4 per cent output drop, with core inflation, which excludes food and energy costs, seen at 3.1 per cent at the end of 2023, down from 3.3 per cent previously.

Meanwhile, the prediction of EY Item Club estimates a 0.3 per cent fall in gross domestic product for the whole of next year.

The leading UK economic group has significantly downgraded its previous summer forecast, which estimated the economy would grow by one per cent.

Yet the EY Item Club believes the risk of a severe downturn has been reduced by the Government’s energy bills cap and that it will not be as bad as previous recessions. The Government intervened early last month to put a ceiling on energy bills at £2,500 a year for the typical household, and it has since pledged to cover a proportion of rocketing costs for businesses as well.

The move should ease the pressure on household incomes and prevent the collapse of businesses that would otherwise be unable to afford the mounting energy bills.

Furthermore, the EY Item Club said that once high inflation eases, the weaker pound boosts exports and the Bank of England’s interest rate hikes end, GDP should return to growth in the second half of 2023. The economy is then expected to expand 2.4 per cent in 2024 and 2.3 per cent in 2025.

But the group warned there was a risk that growth could be dragged down by further economic shocks.

“The silver lining is that the Government’s intervention on energy bills is expected to limit the extent of the downturn while Office for National Statistics data suggests that households have access to a larger cushion of pandemic savings than previously thought.

“Nevertheless, there are very significant risks to the forecast with the potential for further surprises or global instability creating additional drags on growth.

“Businesses will need to think carefully about their resilience and plan for different scenarios while also being mindful of the support they provide to their customers and employees.”

The energy support package is expected to tame inflation, which could peak at just below 11 per cent this month, lower than the 15 per cent that it could have hit without an intervention.

EY said the decline in spending power over the next year will be the biggest drop since the 1970s – but by 2024 inflation will fall back to below the Bank of England’s two per cent target, dropping to 1.8 per cent.

Many in the City believe, despite the barrage of bad news on the economy, Mr Hunt is a safe pair of hands.

Bank of England Governor Andrew Bailey said he spoke to Mr Hunt after his appointment on Friday, explaining the pair had a “meeting of minds” on the issue of fiscal sustainability as he noted that the Office for Budget Responsibility was now “very much back in the picture”.

Rupert Harrison, adviser to George Osborne when he was chancellor from 2010 to 2016 and now at global investment giant BlackRock, said Mr Hunt’s comments were a “turning point”. He added: “Markets now have someone in the Treasury who gets it and who they can trust.”