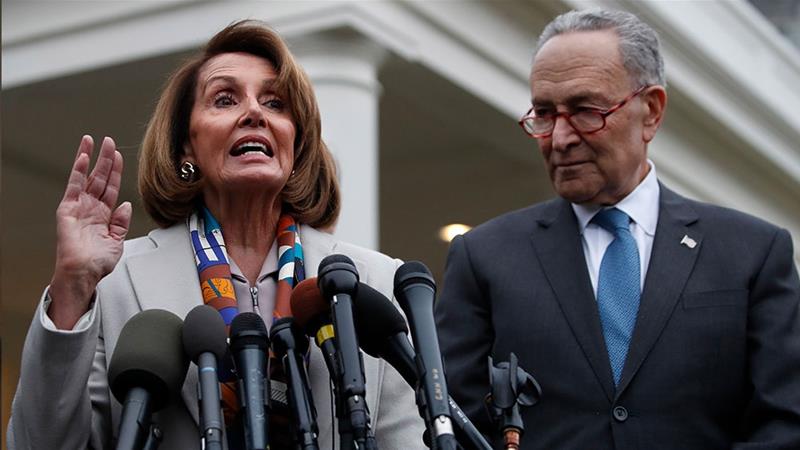 As the partial US government shutdown entered its 13th day, presumptive Speaker of the House Nancy Pelosi hit back at US President Donald Trump, saying there is “no amount of persuasion” he could use to get Democrats to agree to fund a wall on the southern border.

House Democrats, who will assume control of the lower chamber on Thursday, are expected to pass a two-part spending package meant to end the shutdown. The legislation does not include the more than $5bn in wall funding Trump has demanded.

Following a meeting between Trump and top congressional leaders on Wednesday, Senate Majority Leader Mitch McConnell said the Senate would not take up the Democratic legislation because Trump wouldn’t sign it.

Pelosi, speaking to NBC on Thursday, said that negotiating with Trump is difficult because he “resists science, evidence, data, truth”.

“It’s hard to pin the president down on the facts,” she said.

Trump on Wednesday told reporters that the shutdown could last a “long time or could be quickly”, adding that the wall is “too important of a subject to walk away from”. He said he would wait “as long as it takes” to get the $5.6bn he has demanded.

‘I would look foolish’

“I said, ‘Mr President, give me one good reason why you should continue your shutdown’,” Schumer told reporters. “He could not give a good answer.”

According to US media, citing officials familiar with the talks, Trump at one point told Democrats that he would “look foolish” if he backed down from his demand. Talks are expected to resume on Friday.

Trump says the wall is crucial to curbing irregular immigration. Democrats disagree, with Pelosi calling the wall immoral, ineffective and expensive. Trump repeatedly said during his presidential campaign that Mexico would pay for the wall, but Mexico has refused and US taxpayers likely will be left footing the bill.

The Democratic package to end the shutdown would include one bill to temporarily fund the Department of Homeland Security at current levels – with $1.3bn for border security, far less than Trump has said he wants for the wall – through February 8 as talks continue.

It would also include a separate measure to fund the departments of agriculture, interior, housing and urban development and others closed by the partial shutdown. The measure would provide money through the remainder of the fiscal year, to September 30.

The Democratic package could put Trump and his Republican allies in a tough position. If they reject funding bills for departments unconnected to border security, Republicans could be seen as holding those agencies and their roughly 800,000 affected workers hostage to Trump’s desire to build a wall.

More than half are working without pay, while the rest are furloughed.

Last week, federal employees sued the US government over the requirement that workers deemed “essential” must work without pay during the shutdown.

In the past, Congress has approved back pay for federal workers, but the American Federation of Government Employees, which announced the lawsuit on Monday, called the requirement to work without pay “inhumane”.

On Wednesday, the Smithsonian museums and National Zoo in Washington, DC, closed due to the shutdown.

As Biden weighs 2020 bid, Democrats ask: 'Does he meet the moment?'