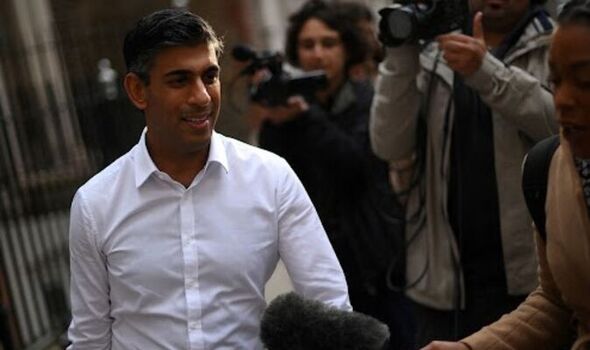 Rishi Sunak, the former Chancellor, now has almost a majority of Tory MPs nominating him although rival Penny Mordaunt is still officially in the race. After gaining significant backing from MPs on the right and left, it is believed Mr Sunak will be named the new PM  at 2pm tomorrow, but his camp said they “are not taking anything for granted”.

A source close to Rishi Sunak told the BBC’s Nick Eardley: “We are not taking anything for granted.

“Rishi will be continuing to talk to colleagues tomorrow morning before nomination papers go in, and discussing how best to unite the party and take the country forward.”

Mr Sunak is expected to be named the country’s new leader after Boris Johnson dramatically pulled out of the running on Sunday evening.

The former Prime Minister said in a statement: “I believe I am well placed to deliver a Conservative victory in 2024 – and tonight I can confirm that I have cleared the very high hurdle of 102 nominations, including a proposer and a seconder, and I could put my nomination in tomorrow.

“There is a very good chance that I would be successful in the election with Conservative party members – and that I could indeed be back in Downing Street on Friday.

“But in the course of the last days I have sadly come to the conclusion that this would simply not be the right thing to do. You can’t govern effectively unless you have a united party in parliament.”

He added: “And though I have reached out to both Rishi and Penny – because I hoped that we could come together in the national interest – we have sadly not been able to work out a way of doing this”.

It comes as Minister Nadhim Zahawi said he will back Sunak, despite announcing earlier on Sunday that he would back Johnson’s leadership bid.

‘It’ll take POLICE to get him out of No10!’ Boris calls bluff over Queen sacking threat