Georgia’s runoff elections on Tuesday are high-stakes contests that will determine which party controls the Senate and set the agenda for the new administration in Washington.

Two Republican incumbents, Senators David Perdue and Kelly Loeffler, are battling to keep their seats. If their Democratic challengers, Jon Ossoff and the Rev. Raphael Warnock, both win, Democrats will reclaim the Senate majority.

Control of the Senate will effectively set the parameters of President-elect Joseph R. Biden Jr.’s first two years in office. A Republican-led Senate would complicate his ability to staff his cabinet, pass legislation and drive his political priorities.

Here’s a look at what we know about the two runoff races ahead of election day.

How have the Democrats and Republicans fared in early voting?

Three million people have already voted in the runoff races, nearly 40 percent of all the registered voters in the state, according to data compiled by the University of Florida’s U.S. Elections Project. That total surpasses the 2.1 million ballots cast in the state’s last Senate runoff election, which happened in 2008.

The early voting data suggests that the races are very competitive. There are some indications that Democrats had a bigger share of the early-voting electorate than they did in the general election, raising hopes for a party that has traditionally been the underdog in runoff races. The Atlanta area, the Democrats’ political base, has seen some of the highest turnout rates in the state’s early voting. 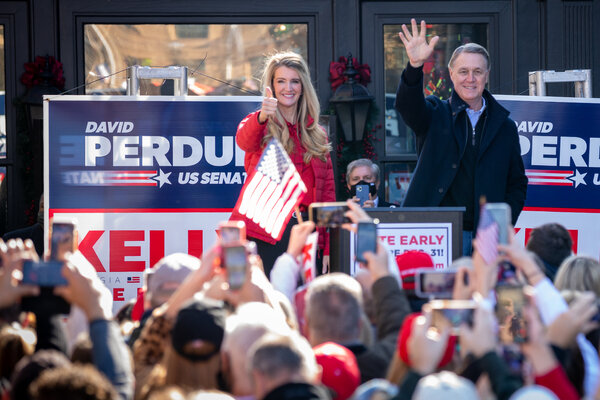 The outcome now depends on whether Republicans can overcome the Democrats’ early gains when they head to the polls on Tuesday. Rates of early voting have been lowest in the conservative northwest corner of the state, worrying some Republicans. But others argue that their supporters typically vote in higher numbers on election day and hope that President Trump’s rally on Monday in Dalton, a city in the northwest, will push more Republicans to the polls.

When are the deadlines to vote?

For those planning to cast ballots in person on election day on Tuesday, voting locations open at 7 a.m. Eastern time and close at 7 p.m. Anyone in line at 7 p.m. can stay in line to vote.

Absentee ballots must be received by mail or placed in a drop box by 7 p.m. Tuesday to be counted. (Democrats warned voters on Monday not to mail in ballots at this point but to put them in drop boxes.) Military and overseas ballots must be postmarked by Tuesday.

What should we expect on election day?

Strategists from both parties remain uncertain on what to anticipate beyond a tight race. Demographic changes have shifted the politics in Georgia, turning the traditionally conservative Southern state into a hotly contested battleground.

In November, Mr. Perdue received 49.7 percent of the vote, just short of the majority he would have needed to avoid a runoff, while his challenger, Mr. Ossoff, had 47.9 percent — a difference of about 88,000 votes. The field was more crowded in the other Senate contest: Mr. Warnock finished with 32.9 percent of the vote and Ms. Loeffler with 25.9 percent.

Modeling the electorate for these rematches isn’t easy: Never has a Georgia runoff determined the balance of power in the Senate — or been held in the midst of a pandemic.

Both parties expect turnout to be significantly higher than in the 2008 Senate runoff election, though few analysts anticipate numbers close to the five million voters in Georgia who cast ballots in November’s general election.

At this point in the race, total turnout is 23 percent lower than it was in the November election, according to state data compiled by Ryan Anderson, a data analyst in Atlanta. About 1.2 million people who voted early in the general election have not yet voted in the runoffs.

When will we know the results?

The Georgia State Election Board extended some emergency provisions from the November election, like keeping drop boxes in place for absentee ballots. Some of the rules were tweaked to encourage a faster count, which would enable the winners to be seated sooner. The new Congress was already sworn in on Sunday.

Counties were required to begin scanning and processing ballots at least a week before the election, though they cannot begin counting or tabulating them until polls close on Tuesday. Those new rules may lead to quicker results, although in a close race most Georgians (and everyone else) may go to sleep before news outlets have enough results to declare a winner.

In November, it took a week and a half of counting after Election Day before it was clear that Mr. Biden had won the state.

Republicans are expected to command an early lead on election night, both because the more conservative areas of the state typically report results faster and because votes cast in person, which have favored Republicans during the pandemic, are typically released earlier. Heavily Democratic counties, including the suburban Atlanta areas that helped Mr. Biden win, historically take longer to count votes.

And yes, there could be yet another round of counting. Under Georgia law, if the margin separating the candidates is within half of a percentage point, the losing candidate can request a recount in which election officials would again run the ballots through scanners.

After multiple vote counts last year, state officials are preparing for all contingencies. The deputy secretary of state, Jordan Fuchs, has said the requirement for a full hand recount — like the one conducted in November — doesn’t apply to runoff elections.

How have the parties been strategizing?

Runoff races have traditionally been relatively sleepy contests, with lower turnout that has favored Republicans because of a drop-off among Democrats, particularly Black voters, after the general election. (The runoffs themselves were devised by white Georgians in the 1960s to dilute the power of Black voters.)

Not this year. A staggering influx of political spending has flooded the state, as campaign operatives, party officials and outside groups descended on the races. Nearly $500 million has been spent on advertising, according to Ad Impact, an advertising tracking firm, saturating the airwaves at previously unheard-of levels.

Democrats have worked to keep turnout high, intensifying their outreach efforts, targeting voters of color with focused advertising campaigns and deploying a flotilla of high-wattage political stars to the state. As Mr. Trump prepared for his rally on Monday night, Mr. Biden campaigned for the Democrats in Atlanta in the afternoon.

A push to reach new voters, led by Stacey Abrams, prompted an estimated 800,000 residents to register to vote in this election cycle — a groundswell that voter mobilization groups have tried to build upon since November. Some Democrats and voting rights organizations have raised concerns about access to voting locations and possible suppression.

The Democratic efforts may be working: Early voting data shows that nearly 31 percent of voters who have cast ballots are Black, an increase of about three percentage points from their share in the general election.

Republicans believe that some voters who backed Mr. Biden will want to see checks on Democratic power in Washington. But their effort has been complicated by Mr. Trump’s refusal to stop litigating the previous contest.

The release of an audio recording of a phone call in which Mr. Trump pressured Georgia’s secretary of state, Brad Raffensperger, to overturn the results of the election has upended the runoff races in the final days.

Some Republican strategists worry that Mr. Trump’s attacks on the presidential election results will complicate their efforts to win back some of the moderate suburban voters who fled their party in November.

A fringe group of conservatives is also encouraging Republicans to boycott the election to support Mr. Trump’s baseless claims about fraudulent vote counting, which could erode the two incumbents’ margins.