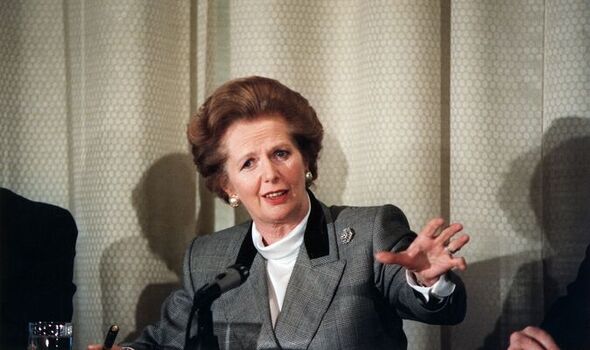 The Iron Lady – whose relationship with the Queen was often awkward – was elevated to royalty on printed menus for a VIP dinner in the Gulf State. Files show the gaffe was made eight years after she was ousted as Prime Minister, and in the Gulf State on a three-day trip with her husband Sir Denis.

Sir Graham Boyce, our man in Kuwait, telegrammed the Foreign Office to say the Kuwaitis had managed to “push the boat out” for them.

The Crown Prince had made his private jet available for their flight from London and put them up at his main residence the Bayan Palace.

He continued that she was guest of honour at a reception for 250 Anglo-Kuwaiti guests and met Britons stranded when Iraq invaded during the first Gulf War.

“It was inevitable that he Kuwaitis would give Lady Thatcher as much, if not greater attention than that accorded to former US Presdients,” he said.

“The Crown prince gave a dinner (at which the English version of the menus described their distinguished visitor as HRH Baroness Lady Thatcher).

Sir Graham, whose memo is among papers released by the Nation Archives, Kew, concluded that the trip was a “helpful and timely boost to our profile”.

Trump: Postal Service must charge Amazon more, or no loan – The Denver Post