Home » Politics » When Parents Lose Their Jobs, Their Children Also Suffer. But Sometimes There’s a Consolation.

In six months without steady work, Gregory Pike, a single father in Las Vegas, has fallen behind on his rent and utilities, borrowed money he cannot repay, turned to food stamps and charity, and fretted that his setbacks may cloud his daughter’s future.

Research dating to the Depression warns that parental unemployment places children at risk: When finances fall and adult tensions rise, young people tend to do worse in school and suffer psychological strains, reducing their prospects for adult success.

But despite the problems he has experienced since March, when the coronavirus eliminated his job, Mr. Pike has found an unexpected consolation: time with his 6-year-old daughter, Makayla, whom he has raised alone for three years.

“As much as this pandemic has brought me some hardship and uncertainty, it’s kind of a blessing — it’s let me focus more on parenting,” Mr. Pike said. “It’s bad but it’s also been good. It’s really brought us a lot closer.”

With parental unemployment having recently hit a record peak, the risks to children are formidable. Nearly 22 percent of children had an unemployed parent in April, the highest rate on record, according to Zachary Parolin, a researcher at Columbia University who analyzed data at the request of The New York Times. By August, the rate had fallen nearly in half, but still approached the peak of the Great Recession and was much higher among Black and Latino children.

No place has felt the impact more deeply than Las Vegas, where in recent months the share of children with an unemployed parent has averaged nearly 36 percent. Accompanied by school closures and fear of contagion, the scars left by parental joblessness now may run uniquely deep.

“These levels of unemployment are huge,” said Jennie E. Brand, a sociologist at the University of California, Los Angeles. “There’s a lot going on in these families that’s going to be hard to recover from.”

In recent interviews, Las Vegas parents echoed the experts’ view that their joblessness posed risks to their children. But like Mr. Pike, many also said they had found rewards in the extra family time, as if newly realizing how little of it had been available in their earlier, overscheduled lives.

“Work-life conflict” is often discussed as a problem of the privileged classes, but low-wage workers may suffer it most, with unpredictable hours, less help with chores like cooking and cleaning and little economic choice. The sudden increase of time with their children has reminded some low-income parents of what they have been missing. 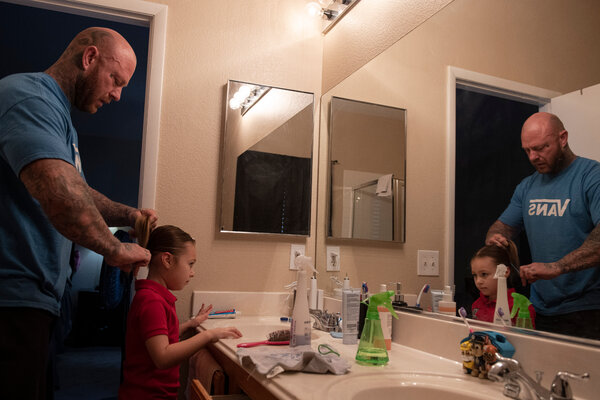 “You know, I’ve gotten to know my kids a lot more,” said Aileen Kelly, a single mother of five who lost her job as a casino housekeeper at the pandemic’s start. “When you’re working, you don’t get the real feeling of raising your kids. You’re providing for them but you’re not teaching them.”

Such rewards do not reduce the risks that unemployment brings — Ms. Kelly has doubled up with a friend, in an apartment with 10 children — but they do offer a window into an overlooked strain on the lives of poor families.

“No one’s saying that families would choose to be unemployed, but I think we forget how short of time low-income families are — short of time, short of money and often short of sleep,” said Jane Waldfogel, a professor at the Columbia School of Social Work. “If people are telling us they don’t have enough time with their children, that’s worth listening to. It’s an odd silver lining, but it’s there.”

“Even when the parents get re-employed quickly, you still see negative effects,” Ms. Brand said.

Lost income offers one explanation, making it harder for families to afford everything from food to Little League. Elevated stress offers another, increasing the risk of parental depression or harsh parenting.

Generally, men are more susceptible than women to the lost self-esteem that unemployment can bring, making jobless fathers the greater threat to family harmony, Ms. Brand found in a review of unemployment research. Poor workers face greater economic risks, she found, but affluent workers are more likely to feel unemployment as a blow to their identity.

The risks unemployment poses to children may depend in part on the safety net, which was significantly expanded at the start of the pandemic but is now contracting.

When Maria Guerrero, a single mother in Las Vegas, lost her job at an airline caterer in March, her unemployment benefits were delayed for two months. Worried about losing her house, she found herself sniping at her 14-year-old daughter.

“You get anxiety, you get depression, you don’t sleep at night, thinking what if they kick me out?” she said. “I was so frustrated I would take it out on my daughter. She goes, ‘You’re always in a mood, you’re always mad.’”

When the benefits arrived, they fully replaced her salary through July, and the household conflict ended. “The relationship got better when I started making my payments again,” Ms. Guerrero said. “We eat together, we’re bonded. This pandemic — it made us closer.”

Three researchers at the University of Chicago — Ariel Kalil, Susan Mayer and Rohen Shah — recently found that government aid had reduced the harm of unemployment during the pandemic. They surveyed nearly 600 low-income single mothers before and after the crisis began.

Parents who lost jobs reported greater depression and stress and more negative interactions with their children — but only if their income declined. Jobless parents who replaced their income, through government aid or second earners, experienced no negative effects. If anything, those parents reported that their interactions with their children had improved.

“Parents really prize their time with their kids, and the support allowed them to enjoy it,” Ms. Kalil said. “Their normal lives are stressful, and having that paid time off is salutary for their mental health.”

Yet even without aid, some Las Vegas parents found satisfaction in the family time their involuntary joblessness brought. Ms. Kelly, the casino housekeeper, became all but homeless after losing her unemployment benefits (for reasons she does not understand), but has had more time for a disabled son and a daughter who was cutting herself. “She wasn’t getting my attention because I was at work,” Ms. Kelly said. “I see a big difference.”

“We can’t live like this forever,” Ms. Kelly added. “I have to go back to work.”

The April rate of parental unemployment — 21.7 percent of children had unemployed parents — shattered the previous monthly record of 16 percent from January 1983. At this year’s peak, that was about 16 million children.

“That’s really an alarming number,” said Mr. Parolin, the Columbia researcher. “Even if parents quickly return to work, I wouldn’t underestimate the psychological toll unemployment takes, particularly in the context of the pandemic.”

Parental unemployment varies greatly by race, with the August levels among Black children (16.2 percent) and Latino children (14.3 percent) nearly twice that of white children (8.3 percent). Likewise, unemployment is much higher among less-educated workers than college graduates, and higher among mothers than fathers, reversing a trend toward gender equity in work rates.

Parental unemployment exceeded a five-month average of 20 percent in a dozen major metropolitan areas, including New York, Los Angeles, Miami, Boston, San Francisco, Detroit and Orlando. Recent Census Bureau surveys showed that households with a jobless parent were about twice as likely as others to miss rent payments or lack sufficient access to food.

In annual terms, previous peaks of parental unemployment came in 1982 (15.3 percent of children) and 2009 (13.2 percent), but the current crisis is more complex.

“We’ve never had a recession that brings with it this major interruption in schooling as well,” said Ann Huff Stevens, an economist at the University of Texas. “It’s hard to see how that won’t make the impact of unemployment even worse.”

A recent questionnaire from The Times, distributed by Fresh EBT, a smartphone app that helps people manage their food stamp benefits, asked parents how the pandemic had affected their relationships with their children. Many simultaneously lamented the lost income but praised the increased family time.

“We are struggling financially, but we have grown closer,” a North Carolina mother wrote.

“We love time together but I am a single parent and need work,” a Washington parent wrote.

“We have benefited having more time together but not having money is not good,” a single mother in Michigan wrote. “I’m being evicted.”

When Mr. Pike, the Las Vegas single father, described his months of unemployment, he offered competing narratives, with no pat resolution.

One is the classic story of falling income and rising strain. When the pandemic broke out in March, Mr. Pike, 41, lost a job building booths for trade shows. Unable to collect unemployment aid (the state is disputing a previous claim), he borrowed from a bank, exhausted his savings and found a few odd jobs but still fell behind on utilities and rent. Sometimes he eats less to make sure his daughter gets fed.

Obliged to supervise Makayla’s online kindergarten class, Mr. Pike has less time to leave home and search for jobs. After five bill collectors and the bank called one morning — he was overdrawn — he lost his temper and sent her to her room for flubbing her ABCs.

“I had to catch myself and go in there and apologize,” he said. “She gets the short end of the stick sometimes. It’s stressful not knowing where you next dollar is coming from.”

But Mr. Pike also said the break from the job has allowed him and Makayla to grow closer. He prizes the relationship all the more because his own childhood lacked close parental ties. He rarely saw his father and said his mother turned to abusive men. Mr. Pike said he dropped out in ninth grade and spent a decade in prison for assaulting one of her boyfriends. He missed most of Makayla’s first three years while serving a second sentence, for drugs, and then got custody.

Prepandemic, father-daughter life began with a 4:30 alarm — work, school, dinner, bath, bed. “We get to be like robots,” he said. Now he and Makayla are all but kindergarten classmates. “We have little conversations, more and more every day. We’ve grown so much from this.”

On a recent day, the air conditioning broke and the indoor temperature hit 98. Mr. Pike was juggling ABCs and a calls from collection agencies. He sounded weary.

“Don’t get me wrong — I can’t wait to get back to work,” he said. “I’m stressed out about my bills. But watching her progress as a little person is amazing. It’s not a bad thing that we’re spending a little time with our families.”