Home » Politics » Who Wants to Lead the House of Representatives?

Tuesday’s elections swept Democrats to power in the House for the first time since 2010, but before Election Day, the leaders of both parties were under pressure.

Democrats have the opportunity to upend the three septuagenarians — Representatives Nancy Pelosi, Steny H. Hoyer and James E. Clyburn — who have led the party since 2007. But a formidable challenger has yet to emerge for any of them.

For Republicans, now in the minority, the retirement of Speaker Paul D. Ryan has created jostling among conservatives pressing for a younger or harder-line leadership.

Elections will most likely be held within the party caucuses before the end of the month.

Democrats and The Majority 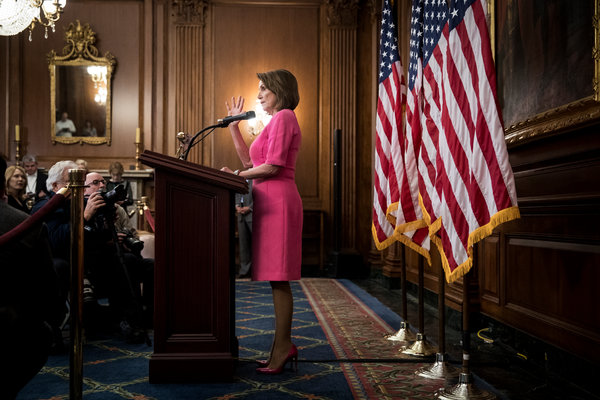 Ms. Pelosi, the only female speaker in history, is confident that she will have the votes to reclaim the gavel.

On the campaign trail the last few weeks, Ms. Pelosi, 78, has extolled her fund-raising ability and negotiation skills, even as a number of newly elected representatives and incumbents distanced themselves from her during the campaign.

It remains unclear, however, if any of her critics will challenge or vote against her. She is counting on the adage that you can’t beat someone with no one.

Ms. Pelosi’s longtime No. 2, Mr. Hoyer said on Wednesday that he would run for majority leader, his old post in the last Democratic majority.

In a letter to colleagues announcing his bid, Mr. Hoyer, 79, promised “that younger and more diverse members must be made a real part of the decision-making process,” but he said the Democratic caucus needed experienced leaders to counter the Trump administration.

Mr. Clyburn, 78, plans to reclaim his old post of majority whip, the No. 3 spot in the leadership.

He has the support of the Congressional Black Caucus, whose members have said they want one of their own in the top leadership positions. And he said he expected the current hierarchy to remain intact. That was a step back from previous suggestions that he could be an interim speaker if Ms. Pelosi failed to win the required 218 votes on the House floor.

Many Democrats believe Mr. Jeffries, the 48-year-old telegenic New Yorker, will be a centerpiece of their party’s future leadership in the House. The question is when.

Mr. Jeffries had kept his cards close to the vest, but in recent days he signaled to other Democrats that he was likely to jump into the race for Democratic caucus chairman, possibly announcing his candidacy as soon as Thursday. That position could set him up to take a shot at a top leadership position in a post-Pelosi world.

He is widely viewed as one of the party’s best communicators and has tried to position himself, somewhat improbably, as an ally of the caucus’s more moderate wing.

A chief deputy whip for more than a decade, Ms. DeGette said on Wednesday that she would challenge Mr. Clyburn for the No. 3 whip position.

Ms. DeGette, 61, would be the second woman to serve as whip. She has served on a number of committees, including Energy and Commerce.

An aide to Ms. DeGette said she planned to emphasize her experience as a vote counter and the need to have more women in leadership roles to reflect the record-breaking number of women who will be in the House.

Mr. Luján, 46, was chairman of the Democratic Congressional Campaign Committee for the victorious 2018 campaign, and on Wednesday he said he would run to be assistant Democratic leader, the No. 4 position. Traditionally, a leadership post would be the reward for steering the party back to the majority.

Mr. Luján, a member of the Congressional Hispanic Caucus and the Native American Caucus, has also served as a chief deputy whip in the leadership since 2013.

Representative Denny Heck of Washington said on Wednesday that he would run to succeed Mr. Luján as head of the campaign arm.

Ms. Bustos, a former newspaper reporter, was the first woman to be elected in her district and has been involved in crafting the House’s farm and transportation bills.

Republicans and The Minority

After Mr. Ryan announced his retirement, the current majority leader, Mr. McCarthy, was anointed his successor. But a Republican will not be speaker next year, and his future in the leadership is less certain in the minority.

Mr. McCarthy announced on Wednesday that he would run for minority leader. A previous run for speaker ended badly in 2015, when he stumbled over public remarks and lost support among hard-line conservatives.

Since then, Mr. McCarthy, 53, has aligned himself closely with Mr. Trump.

Mr. Scalise, currently the majority whip, has said that he does not intend to challenge Mr. McCarthy for the highest Republican leadership role in the House: He said in a Fox News interview in April that he had “never run against Kevin and wouldn’t run against Kevin.”

But if Mr. McCarthy does not clinch the position, Mr. Scalise, 53, is widely seen as the most likely candidate to ascend to the role, where he would push the party rightward.

He has a sentimental edge, having overcome near-fatal injuries from the shooting on an Alexandria, Va., baseball field last year.

Mr. Jordan, a founder of the hard-line Freedom Caucus who became enmeshed in a sexual assault scandal from his time as a college wrestling coach, reiterated his intent on Wednesday to challenge Mr. McCarthy for the top slot.

Mr. Jordan, 54, has the backing of many Freedom Caucus members and outside conservative groups, but is unlikely to overtake Mr. McCarthy or Mr. Scalise. His aggressive tactics — most notably mounting an effort to impeach Rod J. Rosenstein, the deputy attorney general — have frequently divided the party. But in a close race, he could become a kingmaker.

Ms. Cheney announced on Wednesday that she was running for the fourth-highest position in the House, chairwoman of the Republican conference.

Ms. Cheney, the daughter of former Vice President Dick Cheney, would replace Representative Cathy McMorris Rodgers, who has held the position since 2013, and would become the highest-ranking Republican woman in the House.

In a letter to her Republican colleagues, Ms. Cheney, 52, said she would overhaul the party’s communication and messaging efforts.

Voice of the Mirror: Generation of women robbed of state pension deserve dignity