WASHINGTON — Was this the shutdown to end all shutdowns?

The answer could be yes. The toll exacted on government operations and federal employees by the record 35-day stalemate — not to mention the political costs to those in the White House and on Capitol Hill — was so punishing that it is giving momentum to a longstanding call to prohibit the government disruptions that have become a regular facet of Washington hardball.

“Shutting down the government should be as off limits in budget negotiations as chemical warfare is in real warfare,” Senator Lamar Alexander, Republican of Tennessee, said on Friday.

He was not alone in expressing those sentiments. Members of both parties said it was past time to enact legislation that would essentially mean the government would remain open at existing spending levels when an impasse such as the fight over the border wall was reached, rather than shuttering parts or all of the government. That’s an outcome that virtually everyone agrees is costly, unnecessary and even embarrassing.

“This never should have happened,” said Senator Lisa Murkowski, Republican of Alaska, speaking for many.

Veterans of past shutdowns have come to learn that there are few, if any, winners in the end and that closing the government has not proved effective as a negotiating strategy for those who use the government as a lever to press their case. It didn’t work for Newt Gingrich in the 1990s, for Senator Ted Cruz of Texas and House conservatives in 2013 or for Senator Chuck Schumer of New York and fellow Democrats in 2018.

Government workers are penalized through no fault of their own, constituents are inconvenienced, the nation’s image is hurt and those responsible for running the government look inept, irresponsible and unwilling to reach an accommodation. The tension in this shutdown was evident in the internal finger-pointing that broke out among Republicans as workers missed two paychecks and airports began to struggle with the absences of security workers and flight controllers.

“I’ve said repeatedly throughout this process that government shutdowns are a bad idea,” said Senator Rob Portman, Republican of Ohio. “They hurt federal employees and their families, disrupt critical government services and increase the cost to taxpayers. This shutdown confirmed what we already knew about shutdowns. Let’s do something about it now while the pain and inefficiency of this moment is fresh on our minds.”

Mr. Portman has for years sponsored legislation to prevent shutdowns, and he introduced the measure again this month as the government limped along partly closed and federal employees lined up for food assistance and other aid.

Under his plan, which has 18 co-sponsors and rising, funding at existing levels would continue for agencies covered by an appropriations measure that was not signed into law by the beginning of the fiscal year on Oct. 1, preventing any lapse that incites a shutdown. To spur a resolution, funding would be reduced by 1 percent after 120 days if no agreement is reached and by 1 percent more every 90 days. 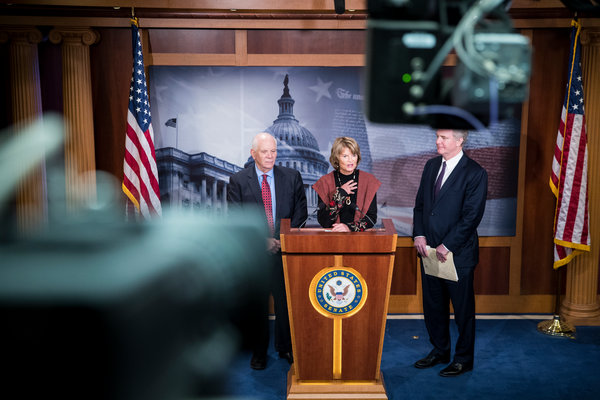 “It is one of these moments where after many years of us trying to get something passed that ends the shutdown, I think there is support coalescing around a legislative response,” Mr. Portman said.

Senator Mark Warner, the Virginia Democrat whose state is home to tens of thousands of federal employees and contractors, introduced his own proposal, partly with the idea of shaming his colleagues and the Trump administration into avoiding such confrontations.

Searching for a bill title that would deliver the message, he and his staff came up with Stop Shutdowns Transferring Unnecessary Pain and Inflicting Damage in the Coming Years, otherwise known as the Stop Stupidity Act. In the event of funding showdowns, his approach would be to maintain spending for all but the legislative branch and the White House.

“More than a little bit of common sense tells me that we wouldn’t be here 35 days into this shutdown if all our staffs were experiencing the same kind of shortfall and economic distress that 800,000 of our fellow federal workers experienced,” he said on the Senate floor.

Mr. Warner acknowledged that his title was somewhat tongue in cheek and that he would be receptive to making changes in the interest of enacting a law that would prevent recurrences of the last weeks.

“The final language in any deal that comes out three weeks from now should put strong provisions and strong penalties in place to prevent this tactic from being used by either party or any White House or Congress in the future,” he said, a view shared by Senator Charles E. Grassley, Republican of Iowa.

“The final package should also end government shutdowns once and for all,” Mr. Grassley said.

Despite widespread sentiment against shutdowns in Congress, there could be opposition. Some lawmakers might not want to surrender potential leverage in the spending wars. There could be resistance from others who don’t like the concept of automatic spending authorization, arguing that it relinquishes a fundamental power of Congress. Democrats have feared that automatic spending cuts could be a backdoor way for Republicans to cut money for federal programs. President Trump might be reluctant to sign a bill that includes such provisions, though he has now experienced such backlash to the shutdown and might prefer another way to circumvent Congress, such as declaring a national emergency to build the wall if negotiations fall through.

Congress will still have its opportunities for brinkmanship such as the need to raise the debt limit, though House Democrats have already taken steps to make that more automatic as well, in an attempt to reduce the threat to economic stability — and eliminate a politically charged vote.

Whether they can succeed remains to be seen, but Mr. Portman, Mr. Alexander and others said they were determined over the next three weeks to press the case for permanent protection against shutdowns.

Be prepared: Joe Biden transition team at work amid limbo