Twenty-one Ukrainian children with cancer have begun NHS treatment after being rescued from the war-torn region over the weekend.

The young refugees are receiving specialist care at seven hospitals across England following a successful evacuation led by a team of NHS medics.

NHS England chief executive Amanda Pritchard said it marked a ‘lifeline for children in the most vulnerable circumstances imaginable’.

The children were originally taken across the border to Poland last week where a flight chartered by Polish authorities brought them safely to England on Sunday.

A team of NHS doctors and nurses flew to Medyka, on the Ukranian border, at the weekend to provide the seriously ill youngsters and their families medical support.

The doctor who led the team yesterday told of how the children hugged and high-fived them as they flew to safety.

Ms Pritchard added: ‘It is hard to overstate how much today will mean for the parents, brothers and sisters of these children, as they start the next phase of a hugely traumatic journey to a healthier and safer future.’

Health and Social Care Secretary Sajid Javid said the children were now in the ‘safest of hands’ with NHS staff. 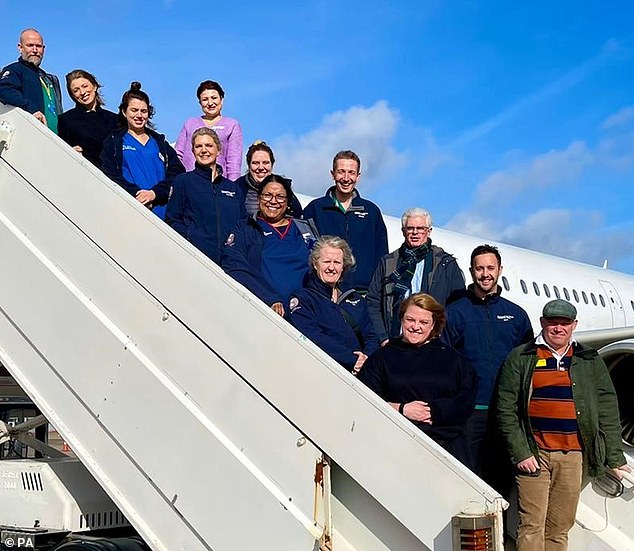 A doctor who led an NHS team on a rescue mission to bring Ukrainian child cancer sufferers to Britain yesterday told of tears of relief as the plane landed. Pictured: Michael Griksaitis is the fourth from bottom, back row, on the plane steps

Mr Javid said: ‘These brave children have overcome unimaginable adversity to make it to England after being forced out of their home country by the Russian invasion.

‘I thank the doctors, nurses and technicians who travelled to Poland to evacuate them, and the Polish government for their support.

‘These children are now in the safest of hands with NHS staff providing world-class cancer treatment, doing everything they can to support them over the coming days and weeks.

‘We stand shoulder to shoulder with Ukraine and will remain at the forefront of the humanitarian response.’

He said yesterday: ‘The children were high-fiving, hugging us. You could see in the parents’ eyes the sense of relief and gratitude. There were tears. It was emotional for everyone involved.

‘Everyone was just incredibly grateful that their child was having the chance to continue their chemotherapy treatment, giving them the chance to live.’ 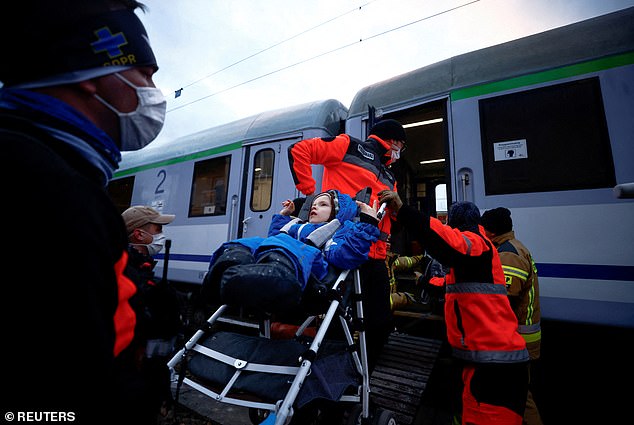 Paramedics help a sick child to board a train transformed for medical transport, as children with chronic illnesses and cancer diagnosis came from Kharkiv fleeing the Russian invasion of Ukraine

The Prime Minister said of the mission: ‘This vital lifesaving medical care is another important step in our support for the people of Ukraine and their resistance.

‘I am hugely grateful to our fantastic NHS staff as well as our partners, including our Polish friends, for their support in bringing these children to the UK and we will continue to do all we can to support them as they continue their critical treatment here.’

Dr Griksaitis, based at Southampton Children’s Hospital, said the children’s parents had told of their harrowing escape from war, adding: ‘Some of the stories of what these children had been through – I can’t even begin to imagine.’

He described the mission as a ‘collaboration across all parts of the NHS’ and stressed: ‘We were just privileged and honoured to be able to help get them to England. This has been the most amazing and emotional experience the team and I have ever had. 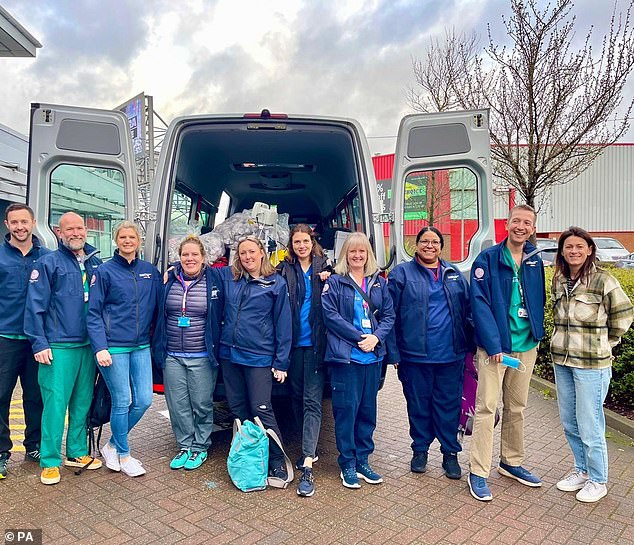 NHS boss Amanda Pritchard said Dr Micha elGriksaitis had ‘led an incredible team of doctors, nurses and technicians’. Pictured: Dr Griksaitis also second from right on the pic at the back of a van 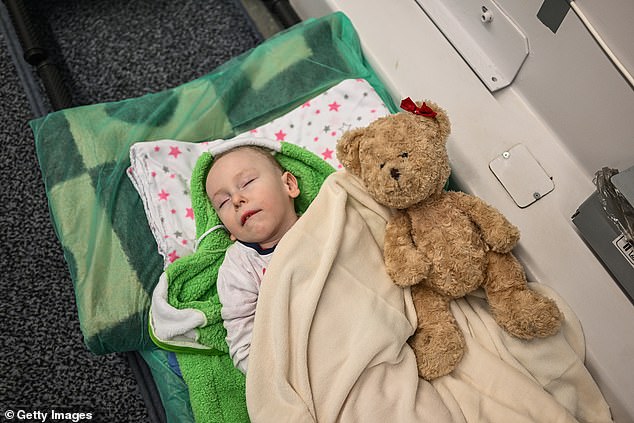 A child with a teddy bear rests inside a train wagon transformed for medical transport on March 10 in Medyka, Poland

‘The families were so incredibly grateful and the stories they told us were so horrific. We were just so pleased to do something to help and delighted it has all gone so well so far. But I am acutely aware that there are so many other people who have been left behind to suffer the ongoing trauma this war is causing.’

Health Secretary Sajid Javid said: ‘I am proud that the UK is offering lifesaving medical care to these Ukrainian children.’

The children were last night undergoing assessments before being sent to hospitals around the country.

The flight comes after the UK sent seven planes full of medical supplies to the war torn region.

Married teacher, 33, who had sexual relationship with pupil, 14 she nicknamed 'Babe' could dodge jail

Canadian detained in China has been released