London: In the heady days of his 2019 campaign to become prime minister, Boris Johnson was occasionally dubbed Teflon Tory – and for good reason. Nothing ever stuck to the showman destined for a long stint in Downing Street.

But the coating is now wearing thin. Johnson enters 2021 a diminished and damaged figure whose political future might well be shaped over the coming months. 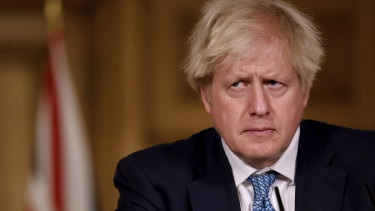 Brits have been forgiving of Prime Minister Boris Johnson so far but a bungled vaccines rollout would be politically disastrous. Credit:AP

The core question is this: can his government, which has so comprehensively fallen short in its handling of the coronavirus pandemic, suddenly get its act together and pull off the error-free mass vaccination endeavour needed to end Britain's health and economic emergency?

The early results are mixed. About 1.5 million people have had the jab since December 8 – more than any other country in Europe – and the UK is the only country in the world to have approved three different vaccine products. However vials are still in short supply at a time when authorities want to vaccinate more people over the next five weeks than they would in five months for the winter flu program.

Health Secretary Matt Hancock visited a GP's surgery in central London this week to spruik that the Oxford-AstraZeneca was being rolled out, only for a doctor, Amanda Hughes, to later reveal that delivery of the first batch had been delayed by at least 24 hours. 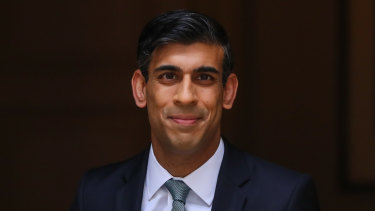 Chancellor Rishi Sunak is popular with MPs but inexperienced. Credit:Bloomberg

The baby-faced Chancellor Rishi Sunak has impressed colleagues but he is inexperienced and was reportedly one of the loudest voices in cabinet against nationwide lockdowns. Jeremy Hunt, a former health secretary who has been highly critical of the government's approach and ran against Johnson in the 2019 leadership contest, could be a dark horse but is playing the long game.

To his credit, Johnson has delivered Brexit – something his two predecessors David Cameron and Theresa May were unwilling or unable to do. But with Brexit done, Johnson's usefulness to the Conservative Party begins to decline and his handling of the pandemic becomes a more critical political question.

The central criticisms of Johnson are that he waits too long to make decisions, is blinded by his natural inclination for optimism and boosterism, and over-promises and under-delivers. A sense of incompetence within Downing Street and the broader British state is his Achilles heel.

After breaking a string of pledges about when life might return to normal in Britain, Johnson has now made another promise: to vaccinate 15 million of the most vulnerable people by February 15. The priority groups – older care home residents and staff, everyone aged 70 or over, all frontline NHS workers, and all those considered clinically extremely vulnerable because of pre-existing health conditions – together account for 88 per cent of all those who have died in the UK since the pandemic began. 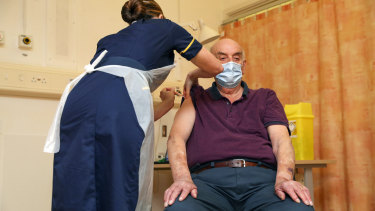 With 1.5 million already given at least one of two jabs, that leaves 13.5 million people, or 337,500 per day, still to be offered the first of two jabs by Valentine's Day.

"I have found this logistic operation to be unparalleled in its scale and complexity and I say this having served in operations around the world," says Brigadier Phil Prosser, the Army's logistics commander who has been put in charge of the military's involvement in the rollout.

With hospitals swamped, 60 million people in lockdown and a highly transmissible new strain wreaking havoc, Britain can't afford a botched rollout when it is so key to minimising deaths and reopening the economy. Politically, Johnson can't afford failure either after directly tying Britain's fortunes to the vaccine program.

"This is a very challenging, stretching target but I think it's vital for us in government to set ourselves the most difficult possible targets that we think we can conceivably achieve because I know that's what you in the public will want us to be doing right now," he said this week.

"Everybody's in lockdown, as everybody can see the NHS is under extreme pressure already. We have to get this done as fast and efficiently as possible. And I do believe it is attainable. I do believe those numbers are doable. But clearly it will be a big stretch and a huge national effort."