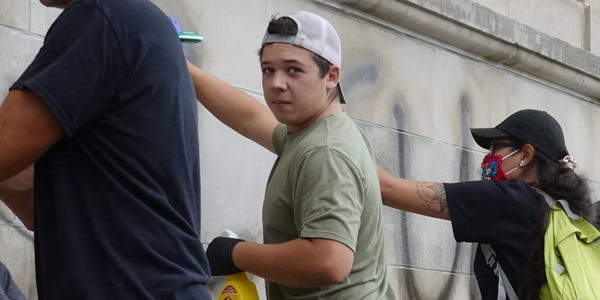 A fundraiser on a Christian crowdfunding platform has raised more than $280,000 to help pay legal costs for suspected Kenosha gunman Kyle Rittenhouse, who is accused of killing two people and injuring a third during a Black Lives Matter protest following the police shooting of Jacob Blake.

The fundraiser on GiveSendGo claims in its description that Rittenhouse "defended himself from a brutal attack by multiple members of the far-leftist group ANTIFA."

"The experience was undoubtedly a brutal one, as he was forced to take two lives to defend his own," says the page's description, written by someone who only identifies themselves as "Rob."

Rittenhouse, a 17-year-old from Antioch, Illinois, has been charged with multiple counts, including first-degree intentional homicide, in the shooting at last week's protest in Kenosha, Wisconsin.

He said the defense will be funded by the #Fightback Foundation, an organization he and fellow lawyers Lawson Pedigo and Lin Wood set up to bring "lawsuits to stop the lies and smears of the radical left."

The fundraiser on GiveSendGo says that it is in contact with Pierce regarding the funds it has raised. At the time of publication, Insider was unable to verify whether the GiveSendGo fundraiser was indeed in contact with Rittenhouse's attorneys. The attorneys did not immediately respond to a request for confirmation.

"Kyle now faces the wrath of those who would see us stripped of our God-given rights and reduced to servitude. He is in dire need of our help," the page's description reads. "Kyle will likely need significant amounts of cash to post bail; for this reason, this fundraiser will be ongoing. His success is our success; his failure, the loss of our right to self-defense. I firmly believe that with the continued support of all of you fine people, Kyle will be freed."

GiveSendGo founder Jacob Wells told Insider that the website had verified the campaign and the disbursement of the funds. He said the organizer asked to remain anonymous. In an August 31 update posted on the fundraiser's page, the organizer encouraged donors to help them reach $500,000.

Meanwhile, #FightBack is raising its own funds for Rittenhouse through its website.

When Insider asked Pierce how much #FightBack had raised for defense funds, he did not give an exact number, but said: "A lot."