Washington: Two people who stole Joe Biden’s daughter Ashley’s diary and family photos have pleaded guilty to a scheme to sell them to a conservative campaign group just before the 2020 election.

Aimee Harris, 40, and Robert Kurlander, 58, admitted conspiring to transport the diary along with family photos from Florida, where they found them, to New York, where they eventually sold them to Project Veritas, the conservative campaign group. The pair face the possibility of up to five years in prison. Their plea deal also requires them to each give up the proceeds of selling the diary – $US20,000 each – and co-operate with investigators. 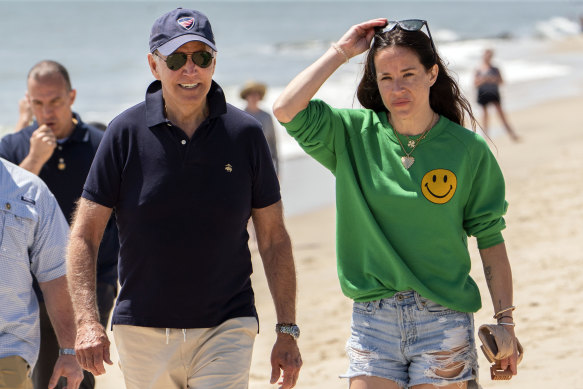 Two people have pleaded guilty in a scheme to peddle a diary and other items belonging to President Joe Biden’s daughter Ashley (right) to the conservative group Project Veritas, prosecutors said.Credit:AP

Ashley Biden, 41, stored her diary and other personal items at a friend’s home in Delray Beach, Florida, when she moved out in the spring of 2020, according to court papers.

Harris subsequently moved into the same room, found the items and contacted Kurlander, who said he would help her make a “tonne of money” from selling them.

The pair first approached Donald Trump’s campaign, but a representative turned down the material and told them to take it to the FBI.

According to the court filings, Kurlander texted Harris saying: “They want it to go to the FBI. There is NO WAY [Trump] can use this. It has to be done a different way.”

They next approached Project Veritas, which identifies itself as a news organisation. The group is popular among conservatives for conducting hidden-camera “stings” seeking to expose liberal bias at media, tech and government institutions.

Project Veritas staff met with Kurlander and Harris in New York and agreed to pay an initial $US10,000.

They said more money could come if they retrieved more of Ashley Biden’s items from the Florida home, partly in order to authenticate the diary, the court filing claims.

According to court papers, Kurlander then told Harris in a text: “They are in a sketchy business and here they are taking what’s literally a stolen diary and info … and trying to make a story that will ruin [Ashley Biden’s life]” and possibly affect the impending presidential election. Prosecutors said the pair took Ashley Biden’s stored tax documents, clothes and luggage.

Kurlander pushed Project Veritas for a bigger payout, telling the group: “We are taking huge risks.”

A Project Veritas representative later flew to Florida and shipped the items to New York.

The organisation paid Harris and Kurlander a further $US10,000 apiece, prosecutors said.

The group decided not to publish its contents because it could not confirm the diary’s authenticity and instead handed it over to law enforcement.

Dozens of handwritten pages from the diary were posted on a right-wing website less than two weeks before the 2020 election but received little attention.

Project Veritas said its actions were “ethical and legal”.

“A journalist’s lawful receipt of material later alleged to be stolen is routine, commonplace and protected by the First Amendment,” the group said in a statement.

The FBI searched the group’s New York offices and the homes of some of its employees as part of the investigation. None of the group has been charged with a crime.