Washington: Astronomers on the hunt for modestly sized asteroids that could vaporise a city or bulkier beasts that could sterilise Earth’s surface have spotted a new potential threat.

Detecting uncharted space rocks relies on spying sunlight glinting off their surfaces. But some asteroids occupy corners of the sky in which the sun’s glare smothers them, and, like embers flitting in front of a thermonuclear bonfire, they fade from view. 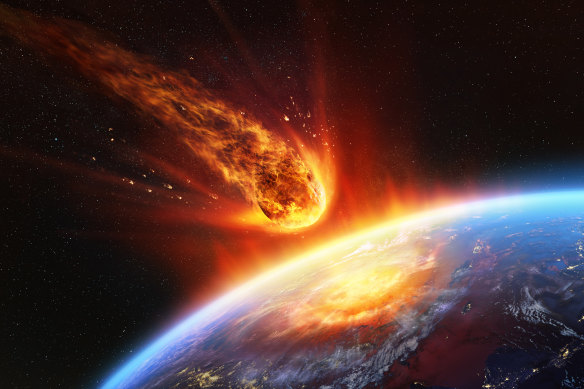 An artist’s impression of a fired asteroid in a collision.Credit:NASA

Last year, in the hope of finding asteroids cloaked by excessive sunlight, an international team of astronomers co-opted a camera primarily designed to investigate the universe’s notoriously elusive dark energy. Now, based on a survey first published in The Astronomical Journal in September, the researchers have announced the discovery of three new light-drowned projectiles.

One of them, 2022 AP7, is roughly 1.6 kilometres long, and its orbit crosses Earth’s path around the sun, getting as near as 7 million kilometres to Earth itself — uncomfortably close by cosmic standards (although far more distant than Earth’s moon). That makes 2022 AP7 “the largest potentially hazardous asteroid found in the last eight years or so,” said Scott Sheppard, an astronomer at the Carnegie Institution for Science in Washington and an author of the study.

But there’s no immediate need to worry — it’ll be many generations until it may pose a danger to our planet.

After the asteroid was discovered in January, additional observatories studied its motion and other astronomers retrospectively identified it in older images. This data set made it clear that it won’t be paying Earth a visit during the next century, and perhaps far longer.

“There is an extremely low probability of an impact in the foreseeable future,” said Tracy Becker, a planetary scientist at the Southwest Research Institute who was not involved with the study. 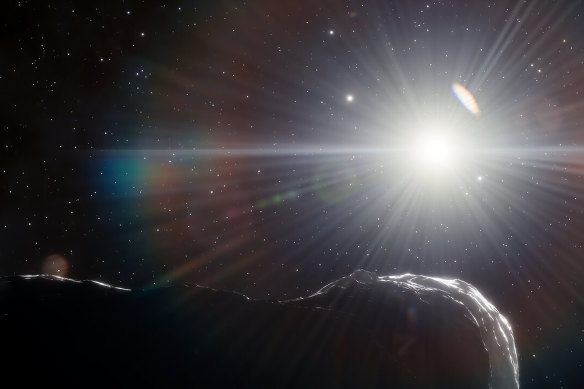 As artist’s impression of an asteroid orbiting close to the sun. Credit:DOE/The New York Times

But the gravitational pull of objects around the solar system – including our own planet – ensures that Earth-crossing asteroids don’t dance the same way forever. The asteroid 2022 AP7 is no exception. “Over time, this asteroid will get brighter and brighter in the sky as it starts crossing Earth’s orbit closer and closer to where the Earth actually is,” Sheppard said.

It’s possible that “way down the line, in the next few thousand years, it could turn into a problem for our descendants,” said Alan Fitzsimmons, an astronomer at Queen’s University Belfast who was not involved with the study.

And if, in the unluckiest of timelines, 2022 AP7 ultimately impacts Earth?

“This is what we call a planet killer,” Sheppard said. “If this one hits the Earth, it would cause planet-wide destruction. It would be very bad for life as we know it.”

But as we are safe for many generations, this asteroid’s orbit is not its most noteworthy feature. “The interesting thing about 2022 AP7 is its relatively large size,” said Cristina Thomas, a planetary astronomer at Northern Arizona University who was not involved with the study. Its existence suggests that other elephantine asteroids, veiled by the sun’s glare, remain disconcertingly undiscovered. 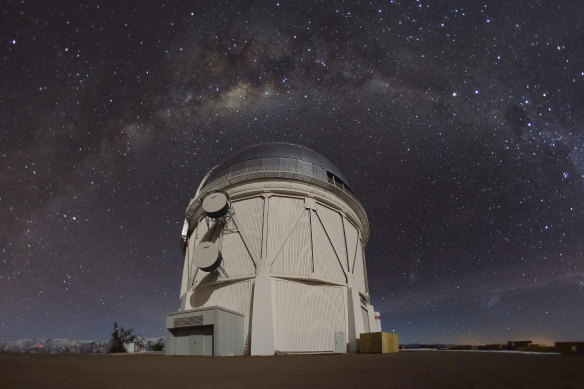 Today, astronomers looking for potentially hazardous asteroids – those that get at least as close as 7.4 million kilometres to Earth and are too chunky to be incinerated without incident by our atmosphere – focus on finding rocks around 140 metres across. There are most likely tens of thousands of them, and fewer than half have been identified. They could wreak destruction on a country-size scale. Such threats have motivated NASA and other space agencies to develop planetary defence missions like DART, the spacecraft that successfully adjusted the orbit of a small, non-threatening asteroid in September.

Most asteroids that are about one kilometre long and larger – far less common, but capable of global devastation – have already been found. But “we know some are still out there to find,” Fitzsimmons said.

Several no doubt sneak about near Mercury and Venus. But it’s “incredibly difficult to discover objects interior to Earth’s orbit with our current discovery telescopes,” Thomas said. During most hours of the day, the sun blinds Earth’s telescopes and objects can be hunted only in the few minutes around twilight.

To overcome this limitation, the astronomers who detected 2022 AP7 relied on the Dark Energy Camera on the Víctor M. Blanco 4-metre Telescope in Chile. Not only can it examine large swaths of the sky, but it is also sensitive enough to find faint objects engulfed by sunlight. So far, the camera has found two additional near-Earth objects: a planet-killer in size whose orbit never crosses Earth’s but takes it closer to the sun than any other known asteroid, flambéing its surface at temperatures extreme enough to liquefy lead; and a smaller, country-killer-size rock that poses no risk.

The twilight survey’s capabilities will eventually be eclipsed by NASA’s Near-Earth Object Surveyor mission. Launching later this decade, this Earth-orbiting infrared observatory will stare into the sun’s glare and find most of the hazardous asteroids that other surveys have missed.

“We want to do everything possible to not be surprised,” Thomas said. That’s why these surveys exist: to find Earth-impacting asteroids many lifetimes in advance so that, through energetic prods or nuclear explosions, we can send these monsters back into the shadows.