Home » World News » A thoroughly modern monarch: how the Queen kept up with 70 years of constant change 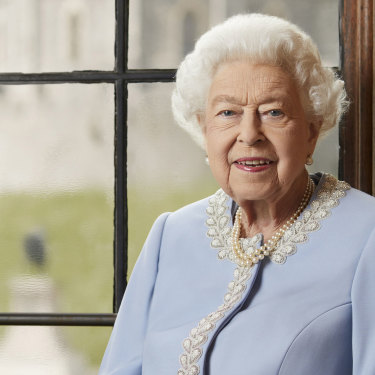 This is the official Platinum Jubilee portrait of the Queen, released on June 2.Credit:Buckingham Palace

When Robert Menzies welcomed a 37-year-old Queen to Australia in 1963, she was almost half his age and more than a couple of generations removed.

Menzies was born in 1894, during the reign of her great-great-grandmother, Victoria. It was before federation, before universal adult suffrage and before many other civil rights and liberties enjoyed today.

So to the Australian prime minister, this young and beautiful woman represented a revolutionary change and he was more than willing to embrace it. Some years earlier he’d appointed Enid Lyons as the first woman to sit his cabinet. 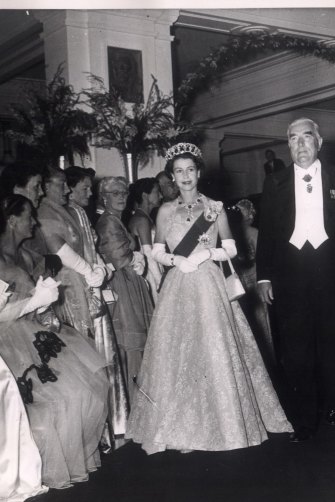 The Queen escorted to dinner at Parliament House by the prime minister Robert Menzies, 1954Credit:Fairfax library

Menzies is now often viewed as a stuffy old relic of a boring age, but he could see that this Queen would long outlive him and oversee a time of enormous cultural change. It would be a second Elizabethan age.

Like his contemporary, Winston Churchill, Menzies was devoted to the young, modern monarch and saw her as an opportunity to redefine the future of not only the monarchy but of his nation’s relationship with it.

At Parliament House in Canberra, Menzies delivered one of his most famous addresses to the young Queen.

“This must be to you now something that is almost a task. All I ask you to remember, in this country of yours, is that every man, woman and child who even sees you with a passing glimpse as you go by, will remember it with joy, remember it in the words of the old seventeenth-century poet who wrote those famous words ‘I did but see her passing by. And yet, I love her till I die’.”

Princess Elizabeth had grown up in a world in which Everest was unconquered and to run a mile took man more than four minutes. When she ascended to the throne, a television in the lounge was rare for the masses and was still pretty much pre-rock ‘n’ roll.

Without intending to, she has become the world’s longest serving television broadcaster, giving speeches since the beginning of the medium. 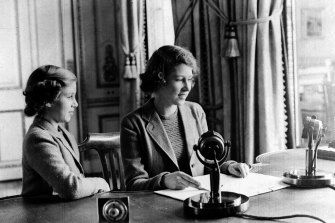 the Queen, pictured here during WWII with her sister Princess Margaret, has been a broadcaster for most of her life.Credit:AP

The Queen made it known to the press her children had been immunised. It remains a critical moment in the wider public acceptance of vaccines.

In the same year she visited Australia for a second time in 1963, the first episode of Dr Who was aired by the BBC. She is said to have been a big fan from the beginning.

Now she reigns in an age of the internet, streaming services, mobile phones and Zoom calls. She has embraced them all.

“She has been the one constant in a rapidly changing world,” royal biographer Penny Junor says.

“We see our politicians as chancers, people out for their own benefit. They lie. They disobey the rules, they are narcissistic . . . All of these things are part and parcel of politics. The Queen is above all of that.”

In 1954, the Queen had become the first British sovereign to visit Australia, engaging in the most gruelling tour imaginable. With Philip, the Duke of Edinburgh they visited 57 towns and cities during the 58 days they spent in Australia. They traversed the country by plane, train, ship and car from Cairns in the north, Broken Hill in the west to Hobart in the south.

It was a high point of royal adulation in Australia. About 75 per cent of Australia’s then 9 million population said they saw the Queen at least once during her eight-week national tour to all state capitals and many regional centres.

Former US president Barack Obama struck on a common modern theme when he paid tribute to the monarch during her platinum jubilee celebration on Thursday.

Obama called her a “gift” to the world and said she reminded him of his grandmother.

“When you’re president of the United States, you meet a lot of remarkable people, and you try under all circumstances to retain your composure,” Obama said in his tribute. “But that’s harder than you think when you’re visiting Her Majesty.

“Before I took office, Michelle and I hadn’t been to too many palaces,” he said. “So, we weren’t sure what to expect on our first trip to Buckingham. But we shouldn’t have been worried. Her Majesty put us at ease with her grace and generosity. So much so that I walked away thinking she actually reminded me a little bit of my grandmother.”

In a recent YouGov poll in Britain, the Queen, who had a 75 per cent approval rating with just 10 per cent of those surveyed having a negative view of the 96-year-old monarch, was described as “amazing”, “wonderful”, “lovely” and “regal”. Eight in 10 Britons (81 per cent) held a positive opinion of the Queen, versus the 12 per cent who saw her negatively – giving the monarch a net score of +69. 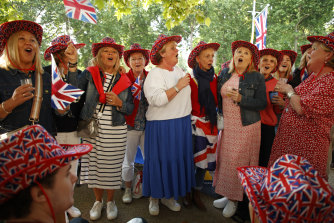 The Queen currently has a 75 per cent approval rating in the latest YouGov poll, and hundreds of thousands of Britons attended the first day of the Jubilee festivities. Credit:AP

In a sign of that deep respect for the monarch personally, even Sinn Féin vice-president Michelle O’Neill wrote to the Queen to thank her for her “warmth and unfailing courtesy” on the occasions when the pair had met and described the “value and respect” she had for the monarch’s contribution to reconciliation. A few decades ago that would have seemed unlikely, to say the least.

Perhaps the great love towards her is partly because as Queen she has kept herself unknowable and her views discreet – unlike other members of her family.

She also learned from her Diana mistake, when she was accused of misreading the mood of the nation following the death of the Princess of Wales in 1997. 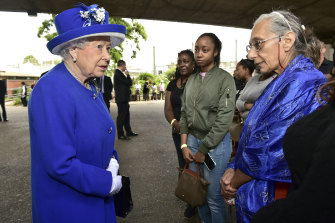 The Queen at the shelter provided for those made homeless by the 2017 Grenfell fire. Credit:POOL PA

In the aftermath of the 2017 Grenfell fire, which claimed 72 lives, she made an empathetic appearance which was directed compared and contrasted with the awkward response of then prime minister Theresa May.

More recently she produced a heartfelt appeal to national solidarity in the frightening early stages of the coronavirus pandemic.

She was slow to change then but did when her people demanded of her a new sort of support. In doing so, she has become a grandmother and even great-grandmother of the nation.

In her Golden Jubilee address to parliament she delighted in Britain’s “richly multicultural and multi-faith society”, citing it as “a major development since 1952″.

It’s why the streets of London were lined by almost a million people on Thursday. People of all nationalities, colours and creeds. They all say the same things. She is gracious, dignified, unruffled and dutiful.

And they all know that this is most likely the last time they can celebrate what she means to them.

“She is seen by many as our greatest ever sovereign; more popular than Queen Victoria, under whose reign Britain transformed into an industrialised nation, and her namesake, Queen Elizabeth I, who oversaw a vibrant era of arts and many new discoveries,” veteran royal commentator Rob Jobson says.

He said her steadying intervention during the uncertain early days of the first COVID-19 lockdown, when she evoked Dame Vera Lynn with her “we’ll meet again” speech, instilled “confidence among the people when we needed her most”.

In such an era of change this Elizabeth was never going to be the sort of monarch to define an age, like Victoria. But rather she has become the central figure of constancy in a world that has struggled to keep up during the fastest rates of change we have ever seen.