Federal Health Minister Greg Hunt and South Australian Premier Steven Marshall have both said Adelaide is not yet in the clear as the spread of the state's first local coronavirus transmissions in three months begins to slow.

The number of local cases in South Australia increased by four to 21 on Tuesday, as health authorities confirmed they had linked the virus strain to a returned overseas traveller at Peppers hotel in Adelaide where a woman whose elderly mother tested positive on Sunday had worked. 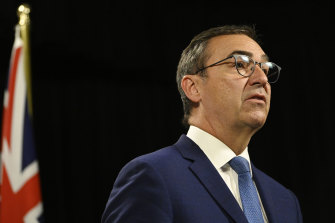 South Australian Chief Health Officer Nicola Spurrier said more than 4000 people remain in quarantine after being identified as a close contact of a case, including a "significant number" of school students.

The four new cases are linked to the existing cluster. Dr Spurrier said 14 people linked to confirmed cases – mainly children with symptoms who have returned a negative test – are being retested.

Of the cases linked to the cluster, three are family members of a security guard who worked at a quarantine hotel and one is a worker at an Anglicare aged care facility.

All residents at the facility have returned negative tests, Mr Hunt said.

The cases were the only new local coronavirus cases recorded across Australia on Tuesday, with NSW recording four new cases in hotel quarantine.

"Today's news is good news," Mr Hunt said. "We are not out of the woods yet – there is more to be done – but we are in an extremely strong position."

"Other states may choose to go further, but they'll have to explain that," he said.

Mr Marshall said it was promising that more than 10,000 people had turned out for testing since Monday but his state was "just at the beginning stages of dealing with this particular very nasty cluster".

South Australia implemented new coronavirus restrictions on Tuesday, including gym closures, 10-person caps on household gatherings and a ban on stand-up drinking in pubs and bars. International flights to the city have been suspended for a week.

Returned overseas arrivals staying at Peppers received a letter under their door from SA Health on Monday advising they would be transferred to a new hotel and required to stay in quarantine for up to an additional 14 days.

Adelaide resident Luke Newcombe was completing his quarantine period in the hotel after returning to Australia from Britain.

"Why am I being punished for the lack of organisation on their behalf?" he said. "I'm happy to put up my hand and do another test," he said.

NSW recorded its 10th day without a recent local coronavirus case on Tuesday. For Victoria, the zero figure marked 18 days without a case.

Get our Coronavirus Update newsletter for the day’s crucial developments and the numbers you need to know. Sign up to The Sydney Morning Herald’s newsletter here and The Age’s here.