Terrified families in Kabul today handed red and white roses to the Taliban fighters who have taken their city – as they desperately tried to build bridges with them.

Footage of the men and boys approaching the armed members showed them handing the symbolic coloured flowers.

Ironically the flowers were nearly wiped out during the last Taliban regime when gardens were left neglected.

The handing of the roses was a last gamble of families in Kabul who are anxiously waiting to see how rule under the Islamists will look.

Many fear women and girls will no longer be safe, as the Taliban banned education and many freedoms previously.

With little else to urge compassion from them, mothers and fathers are hoping the gesture will encourage mercy.

The peaceful act is in stark contrast to the actions of Taliban fighters marauding the capital city.

They have been targeting pro-West men and women and knocking on doors to take them away. 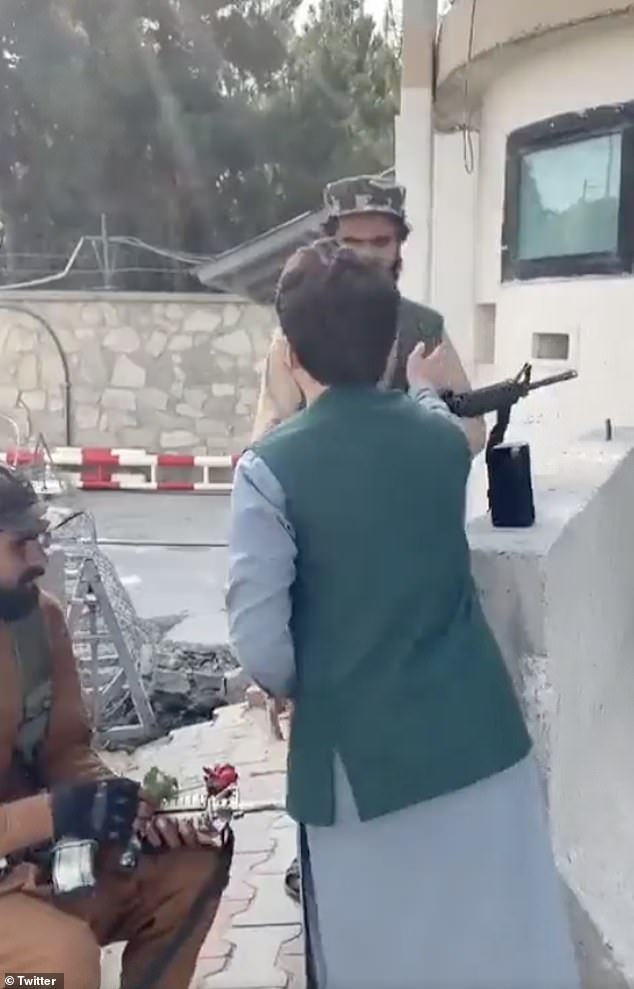 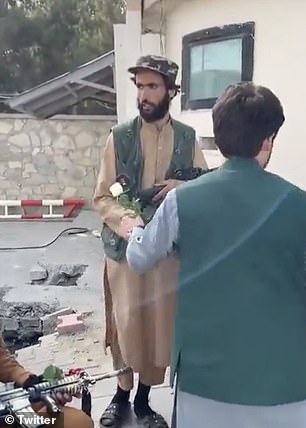 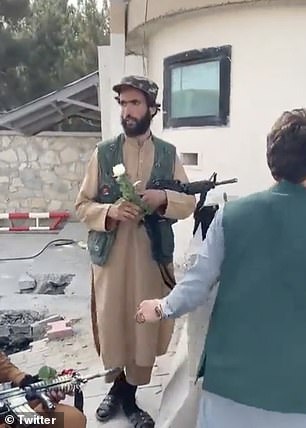 In Afghani culture the colours of the roses can signify different things, including friendship

Numbers of those taken are so high commanders are now marking houses so they know to come back later.

Homira Rezai, who live there until she was 13 before coming to the UK, told Women’s Hour that the militants had a list of punishments already lined up.

She added: ‘Just an hour ago, I received an update from Kabul where they are going house to house searching for women who were activists, women who were bloggers, YouTubers, any women who had a role in the development of civil society in Afghanistan.

Some Kabul residents cautiously ventured back to work through quiet streets today after a night broken by the sound of gunfire and facing questions from their new Taliban rulers stationed at checkpoints across the Afghan capital.

The Islamist Taliban, who stopped women from working and administered punishments including public stoning during their previous 1996-2001 rule, swept the country in days as U.S.-backed government forces melted away. 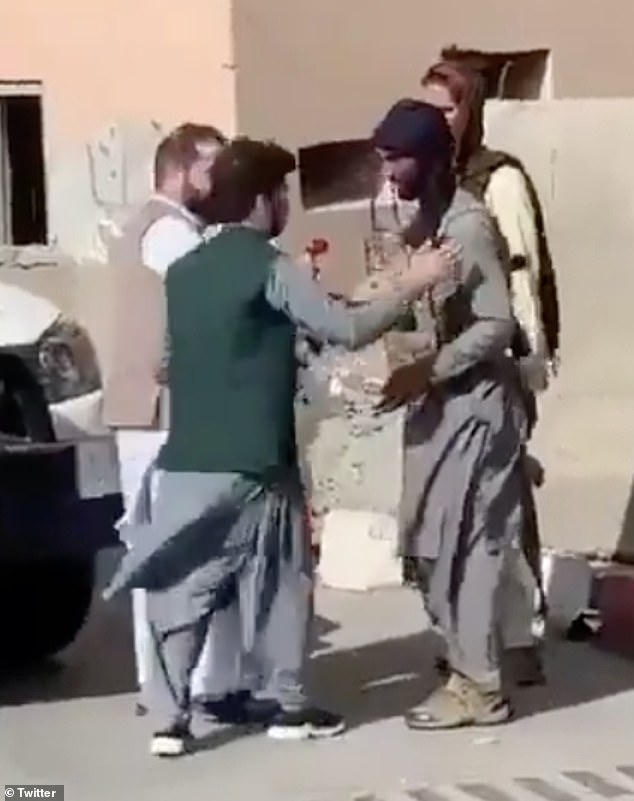 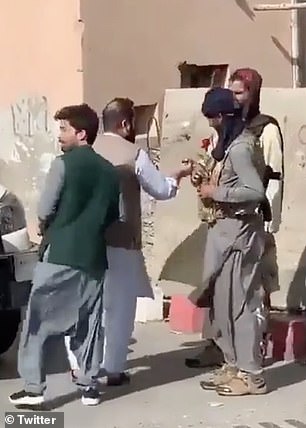 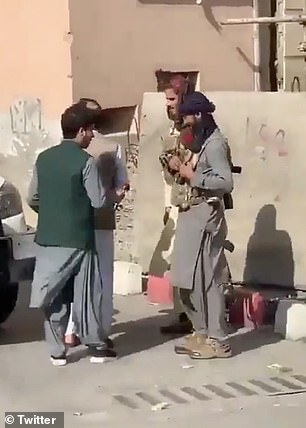 Roses in Afghanistan hold a special significance dating back centuries.

When the Taliban were last in power they were neglected as fighting ravaged the country.

But the collapse of the regime in 2001 sparked a renaissance in the popular flowers.

Afghanis rediscovered their gardens and the country’s roses were tended back to life.

It says: ‘May you have the beauty of a rose, but bloom for longer’

While the Taliban have pledged there will be no retribution against opponents and promised to respect the rights of women, minorities and foreigners, many Afghans are sceptical.

‘I am scared but what made me open my shop is feeding my family,’ 48-year-old grocery shopkeeper Mohammadullah said,

‘I don’t have any other way of income. If I don’t open my shop then how can I feed my family of 12?’ he said, adding that there were far fewer customers than usual.

The majority of shops and supermarkets in Kabul were shuttered and schools were closed, residents said. But some small grocery shops and butchers were open, as were hospitals.

Traffic was light, but there were several pick-up trucks with mounted white flags that were carrying Taliban gunmen.

‘It was with the nation supporting us that the Americans failed here, and the Islamic system is established,’ said a Taliban commander on the street, Mawlavi Haq Dost.

‘This is a legal system and we assure our people whether they are Hazara, Tajik or Turk (minorities) that there won’t be any harassment from mujahideen to them.’

Asadullah Wardak, a doctor in Afghanistan for 12 years, said he decided to return to work after staying home for two days. His children, who live in Canada, have urged him to leave, but he has opted to stay in Kabul where he works as a gynaecologist. 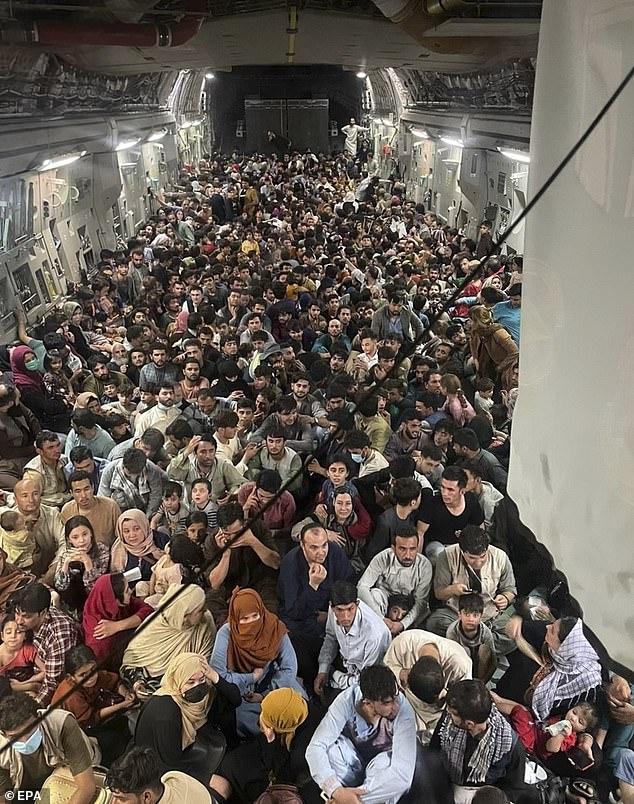 How did the Taliban take over Afghanistan so quickly?

The Taliban’s stunning and rapid takeover of Afghanistan was the result not only of their battlefield strength, but also a sustained push to force surrenders and cut deals.

The insurgents mixed threats and lures with propaganda and psychological warfare as they took city after city – some with barely a shot fired – eventually capturing the capital Kabul.

As foreign troops began their final withdrawal in May, Washington and Kabul were confident the Afghan military would put up a strong fight against the Taliban.

With more than 300,000 personnel and multi-billion-dollar equipment more advanced than the Taliban arsenal, Afghan forces were formidable – on paper.

In reality, they were plagued by corruption, poor leadership, lack of training and plummeting morale for years. Desertions were common and US government inspectors had long warned that the force was unsustainable.

On his way to work at the Sana Medical Hospital, two Taliban men checked his car and his identity card.

He said they told him he was free to work and gave him phone numbers to call in case his hospital encountered problems with blood supplies or medicine shortages.

They also asked him to ensure women patients and female doctors work separately .

He was also told that male doctors are only allowed to see female patients in the presence of another female doctor, he said.

Alberto Zanin, medical coordinator of an Italian medical charity in Kabul, said his hospital had treated several patients with gunshot wounds in the last 24 hours.

He added that some of whom were injured in the chaos at Kabul airport as hundreds of citizens tried to flee aboard diplomatic evacuation flights.

He said there was a lot of gunfire during the night and that the situation in the city remained tense, with armed Taliban soldiers stopping people at checkpoints close to his home.

‘In the city, there is much less traffic, far fewer people out and about,’ he said.

One German officer who served in Afghanistan in recent years said he had received desperate pleas for help he had received from a local interpreter in Kabul he used to work with.

‘I fear for my wife and kids,’ the interpreter said in one message to the officer.

‘Taliban will…punish us for our work for you.

At a glance: What is the situation in Afghanistan and how many people are being evacuated?

The Taliban have seized power in Afghanistan two weeks before the US was set to complete its troop withdrawal after a costly 20-year war. Here is the latest: