Home » World News » After 49 years, outlawing abortion in the US won’t stop abortions – it will just make them dangerous

In the United States, Americans have gathered outside the Supreme Court building to protest the most serious threat to reproductive rights in a generation. On May 2, the website Politico published a leaked draft opinion revealing that the Supreme Court is poised to overturn Roe v Wade.

That was a landmark 1973 decision that guarantees abortion as a constitutional right. Over the decades, the decision has survived multiple legal challenges and been repeatedly reaffirmed by the Supreme Court, leading some legal scholars to describe it as a “super precedent”. The leaked draft, authored by Justice Samuel Alito, rejects such arguments, describing Roe as “egregiously wrong from the start”. It denies a constitutional right to abortion and would return the issue of abortion regulation to the states. 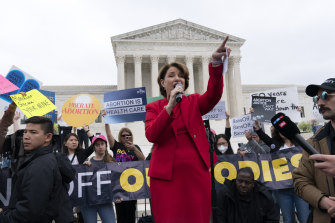 Protesters outside the US Supreme Court this week.Credit:AP

The substance of the draft is a major victory for opponents of abortion and Republican politicians, the product of almost 40 years of co-ordinated effort dating back to former president Ronald Reagan. Reagan carefully used abortion and other “culture wars” matters to attract conservative Christian voters to the Republican Party.

Having failed in their efforts to use the legislative branch to amend the US constitution in the early 1980s, anti-abortionists developed a two-pronged judicial strategy. They worked for state laws that chipped away at abortion rights and Roe, and lobbied for the nomination of “constitutional originalists” to Supreme Court vacancies. Long before Donald Trump’s 2016 victory, abortion access had dramatically eroded across the US. As President, Trump filled three Supreme Court vacancies, giving conservative justices a six-three majority on the bench, meaning the end of Roe seemed all but inevitable.

Despite the controversy and rhetoric from politicians in each election cycle, abortion is a routine procedure in the US. About one in four American women have an abortion before they are 45. Public opinion polls from 2021 show broad popular support for both abortion in general and Roe as a judgment.

In choosing to overturn Roe, the Supreme Court’s actions are not reflective of popular opinion or legal consensus. Rather, they demonstrate the intense politicisation of the court as a branch of government. Last year, public approval of and confidence in the Supreme Court hit a record low. Belief in the judicial branch as a neutral, impartial arbiter of law, above the hurly-burly of partisan politics, is collapsing at an accelerated rate.

The intense US political polarisation surrounding abortion means that if Roe falls, a patchwork of abortion laws will follow. Thirteen states have “trigger laws” on the books that will immediately ban abortion, while a further 10 are expected to move quickly to criminalise the procedure. The states most hostile to abortion rights are in the South and Midwest. Sixteen states, primarily on the East and West coasts, as well as the District of Columbia, have laws that protect the right to abortion.

The states that will move to ban abortion are almost uniformly Republican-dominated. Given this political landscape, it seems almost impossible that Democrats would be able to win sufficient votes in these states to see abortion rights restored. President Joe Biden has condemned the content of the leaked draft and indicated his support for the Women’s Health Protection Bill, which seeks to codify the rights in Roe via Congressional legislation. However, Democrats do not have the numbers in the Senate or the political capital for this legislation to be passed, and Biden is facing an ugly midterm election which will likely erode his slim Congressional majorities.

If Roe is overturned, safe and legal access to essential health care will be determined by state legislators. Abortion patients in the so-called red states will need significant financial resources and the ability to travel hundreds of kilometres to access time-sensitive care.

Yet most abortion patients in the US are already from vulnerable and marginalised populations; three-quarters are low-income and more than half are people of colour. Even with the rights enshrined in Roe they faced immense barriers in accessing abortion. If Roe is overturned, the devastating consequences will fall primarily on the shoulders of those least able to bear it.

And as evidence from around the globe has shown, banning abortion does not stop abortion, nor does it reduce the number of abortions. Rather, criminalising the procedure simply stops safe, legal abortion.

For 49 years, the ability to choose whether or not to continue a pregnancy has been a fundamental right in the US. If the Supreme Court does overturn Roe when it hands down the final judgment in July, it is turning its back on the notion of a right to sexual privacy and rejecting the reproductive autonomy of women and pregnant people.

Dr Prudence Flowers is a senior lecturer in US history in the College of Humanities, Arts and Social Sciences at Flinders University.

Idaho Banned Trans Women From Competing In School Sports: One College Student is Fighting Back