New York: Two of the men found guilty of the assassination of Malcolm X are expected to have their convictions thrown out on Friday AEDT, the Manhattan district attorney and lawyers for the two men said, rewriting the official history of one of the most notorious murders of the civil rights era.

The exoneration of the two men, Muhammad A. Aziz and Khalil Islam, represents a remarkable acknowledgment of grave errors made in a case of towering importance: the 1965 murder of one of America’s most influential black leaders in the fight against racism.

A 22-month investigation conducted jointly by the Manhattan district attorney’s office and attorneys for the two men found that prosecutors and two of the nation’s premier law enforcement agencies — the FBI and the New York City Police Department — had withheld key evidence that, had it been turned over, would likely have led to the men’s acquittal. 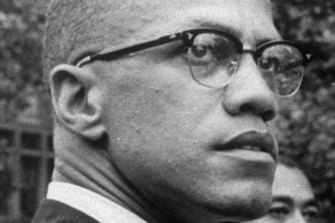 The two men, known at the time of the killing as Norman 3X Butler and Thomas 15X Johnson, spent decades in prison for the murder, which took place February 21, 1965, when three men opened fire inside a crowded ballroom at the Audubon Ballroom in Manhattan as Malcolm X was starting to speak.

But the case against them was questionable from the outset and in the decades since historians and hobbyists have raised doubts about the official story.

The review, which was undertaken as an explosive documentary about the assassination and a new biography renewed interest in the case, did not identify who prosecutors now believe really killed Malcolm X, and those who were previously implicated but never arrested are dead. 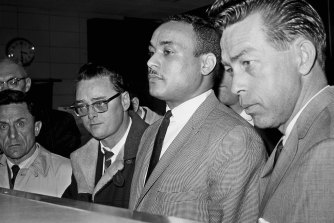 Thomas 15X Johnson, centre, is booked as the third suspect in the slaying of Malcolm X, in New York, March 3, 1965.Credit:AP

Nor did it uncover a police or government conspiracy to kill him. It also left unanswered questions about how and why the police and the federal government failed to prevent the assassination.

But the acknowledgment by Cyrus Vance jnr, the Manhattan district attorney who is among the nation’s most prominent local prosecutors, recasts one of the most painful moments in modern American history.

And at a time when racism and discrimination in the criminal justice system are once again the focus of a national protest movement, it reveals a bitter truth: that two of the people convicted of killing Malcolm X — black Muslim men hastily arrested and tried on shaky evidence — were themselves victims of the very discrimination and injustice that he denounced in language that has echoed across the decades.

In an interview, Vance apologised on behalf of law enforcement, which he said had failed the families of the two men. Those failures, he said, could not be remedied, “but what we can do is acknowledge the error, the severity of the error”. 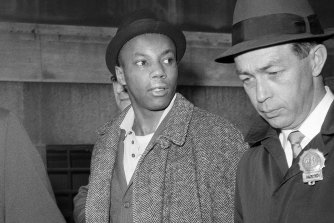 Norman 3X Butler, 26, a suspect in the slaying of Malcolm X, is escorted by detectives at police headquarters, after his arrest, in 1965. Credit:AP

Vance’s reinvestigation, conducted with the Innocence Project and the office of David Shanies, a civil rights lawyer, contended with serious obstacles. Many of those involved in the murder case, including witnesses, investigators and trial lawyers as well as other potential suspects, died long ago. Key documents were lost to time and physical evidence, such as murder weapons, were no longer available to be tested.

“This points to the truth that law enforcement over history has often failed to live up to its responsibilities,” Vance said. “These men did not get the justice that they deserved.”

Still, the evidence available was significant.

A trove of FBI documents included information that implicated other suspects and pointed away from Islam and Aziz. Prosecutors’ notes indicate they failed to disclose the presence of undercover officers in the ballroom at the time of the shooting. And Police Department files revealed that a reporter for The New York Daily News received a call the morning of the shooting indicating that Malcolm X would be murdered.

Investigators also interviewed a living witness, known only as J.M., who backed up Aziz’s alibi, further suggesting that he had not participated in the shooting but had been, as he said at the trial, at home nursing his wounded legs.

“This wasn’t a mere oversight,” said Deborah Francois, an attorney for the men. “This was a product of extreme and gross official misconduct.”

The assassination unfolded on a bright February day, at the dawn of what was to be a new phase in Malcolm X’s career as a civil-rights leader.

He had introduced himself to the American public six years earlier, a Nebraska-born street hustler turned minister speaking forcefully on behalf of the Nation of Islam, the Black nationalist group, about the way that white authorities abused their power and brutalised black people.

Some of his ideas, espoused during his time in the Nation of Islam — he called white people devils and advocated racial separatism — were outside the mainstream even by today’s standards. The news media, which was then almost wholly white, portrayed Malcolm X as a “racist” and a dangerous agitator and referred to the Nation as a “cult”.

But he was also a person of intense fascination, a fiery and persuasive speaker who voiced ideas that many Americans had never heard before. And in 1965, a year after having left the Nation of Islam, he was beginning to define the mission of a new group, the Organisation of Afro-American Unity — the subject of his planned speech at the Audubon Ballroom.

But shortly after he began to speak, he was attacked by three gunmen who rushed the stage, firing at him in front of his pregnant wife and three of his daughters and killing him. He was 39.

One suspect, Mujahid Abdul Halim, was apprehended at the ballroom after being shot in the thigh.

Aziz, then known as Norman 3X Butler, was arrested five days later, and Islam, known as Thomas 15X Johnson, another five days after that. Within a week, the three men, all members of the Nation of Islam, had been charged with murder.

At the trial in 1966, prosecutors cast Islam, who was once Malcolm X’s driver, as the assassin who fired the fatal shotgun blast. Halim and Aziz were said to have followed close behind, firing their pistols. Ten eyewitnesses said they had seen Islam, Aziz or both.

But the witness statements were contradictory, and no physical evidence tied Aziz or Islam to the murder, or even the crime scene. Both men offered credible alibis, which were backed by testimony from their spouses and friends.

And when Halim, also known as Talmadge Hayer, took the stand for the second time during the trial and confessed, he insisted that his two co-defendants were innocent.

On March 11, 1966, all three defendants were found guilty and, a month later, sentenced to life in prison.

Even then, evidence was already pointing to another theory of the case.

Some of the evidence that appeared to exonerate Aziz and Islam emerged during their trial, but because key information was withheld by the authorities, its significance only became clear later.

One defence witness, Ernest Greene, testified that he had seen the man with the shotgun, and described him as dark-skinned, stocky and sporting a “deep” beard — a poor match for Islam, the man who was cast in the role by prosecutors, who was light-skinned, lean and clean-shaven.

But Greene’s description matched another man, one whose name jurors did not hear: William Bradley, a member of the same Nation of Islam mosque in Newark, New Jersey as Halim.

Bradley was an enforcer for the Nation of Islam, which Malcolm X had joined in 1952 and promoted unceasingly for a dozen years before an acrimonious break the year before the assassination.

He was less than 6-feet tall (1.8 metres) weighed 182 pounds (82 kg) and was dark-skinned. He had been a machine-gunner in the Marine Corps and his criminal history included a charge of possessing an illegal weapon.

The description of Bradley was in FBI files at the time, and Halim even identified him as one of the assassins. And the authorities were aware that the Nation of Islam was targeting Malcolm X; a week before the assassination, his house was firebombed while he slept inside with his wife and daughters.

But it would be years before the connection to Bradley became more clear, as a succession of amateur investigators — journalists, historians, biographers and others — took up the case.

One of the most important of these civilians was Abdur-Rahman Muhammad, who hosted a Netflix documentary series early last year that again assembled the case for the two men’s innocence — and others’ guilt. Upon the release of the series, Vance announced that he would take up the case.

Vance’s investigators, working with Islam and Aziz’s attorneys, examined the evidence that had long been laid out and pored over publicly, including the FBI file on Bradley. (Bradley, who changed his name to Al-Mustafa Shabazz, died in 2018 and his attorney denied that he had participated in the murder.)

The bureau’s files contained a report stating that officials in New York had not been told Bradley was a suspect, as well as an informant’s secondhand account that Bradley was the shotgun assassin.

One of the most significant weaknesses in the government’s case, the review found, was Halim’s confession and his exoneration of his co-defendants.

Although all three defendants were members of the Nation of Islam, prosecutors failed to draw any connection between Halim, who attended the mosque in Newark and said his co-conspirators were from New Jersey, and Islam and Aziz, who attended the Nation’s mosque in Harlem. Several defence witnesses said Aziz and Islam were home at the time of the murder.

While most of the people the review panel sought to interview were dead, a witness who initially came forward at a screening of the documentary offered an account that seemed to confirm Aziz’s alibi and had never been heard by the authorities.

The witness, identified as J.M., said he was handling the phone at the Nation’s Harlem mosque on the day Malcolm X was killed when Aziz called and asked for the mosque’s captain. They hung up while J.M. went to find the captain, and then J.M. called Aziz back on his home phone. Aziz answered.

Representatives for the two exonerated men said that the moment meant a lot to Aziz, and to Islam’s family. But Shanies, one of the civil rights lawyers representing them, said their convictions had a “horrific, torturous and unconscionable” effect that cannot be undone.

The two men spent a combined 42 years in prison, with years in solitary confinement between them. They were held in some of New York’s worst maximum security prisons in the 1970s, a decade that bore witness to the Attica uprisings.

Aziz had six children at the time he was convicted; Islam had three. Both men saw their marriages fall apart and spent the primes of their lives behind bars.

Even after their release, they were understood as Malcolm X’s killers, affecting their ability to live openly in society.

“It affected them in every way you could possibly imagine, them and their families,” Shanies said.

In the final episode of the documentary series, Muhammad, the host, asks Aziz to sign a petition asking the Manhattan district attorney to review his conviction. Aziz obliges, but says that the 20 years he spent in prison had erased his faith that his name would ever be cleared.