Almost 50,000 patient visits have been ruined because of the largest ever strikes in NHS history that are planned for next month

Almost 50,000 patients had operations and appointments cancelled when nurses walked out of hospitals this week, with more set to suffer next month as strikes escalate.

The Unite union yesterday announced that 3,000 of its ambulance staff will join the biggest day of industrial action in the history of the NHS on February 6.

They will picket alongside 10,000 paramedics and call handlers from the GMB and 30,000 nurses from the Royal College of Nursing in a move that threatens to cripple the service.

Some 11,363 nurses joined the industrial action this Wednesday and 11,219 on Thursday, figures from NHS England reveal. 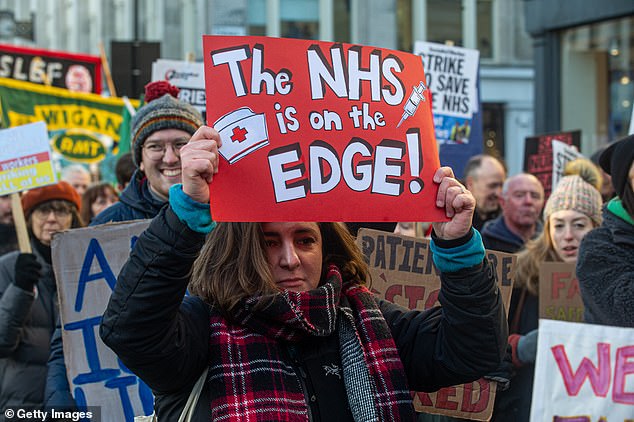 In total, 48,170 appointments and operations were postponed due to this week’s strikes 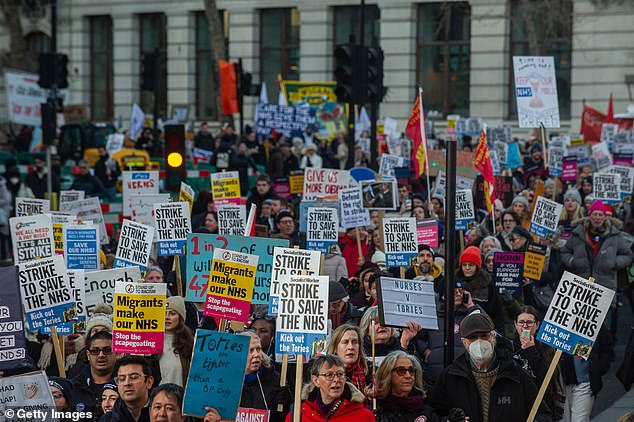 Some 11,363 nurses joined the industrial action this Wednesday and 11,219 on Thursday, figures from NHS England reveal

December’s strikes saw the postponement of almost 30,000 acute appointments and operations, hampering efforts to reduce waiting lists, which stand at 7.2million. No figures on non-acute appointments and procedures were published for December. Saffron Cordery, chief executive of NHS Providers, which represents NHS trusts, said the figures show patients are ‘paying a heavy price’ for industrial action.

She said: ‘Operations and appointments are piling up and this number will continue to rise with more strikes on the horizon.’

Health leaders expect to postpone even more procedures on February 6 as ambulance staff and nurses strike on the same day for the first time. Nurses will also strike the next day. Patients may be left in agony for months waiting for rescheduled care.

Unite has announced ten more strike dates, with members at five NHS ambulance trusts in England and Wales joining the industrial action on February 6. Tory MPs say there will be ‘avoidable deaths’. Unions want the Government to increase its offer of a 4 per cent pay rise, with the Royal College of Nursing demanding an inflation-busting 19.2 per cent.

The Hospital Consultants and Specialists Association last night announced that its junior doctors had voted in favour of striking in a dispute over pay and will now agree ‘the timing and shape’ of the action. The union only had 531 members eligible to take part in the ballot.

Around 45,000 junior doctors who are members of the British Medical Association have also been balloted over strikes. The result is due at the end of February.

A spokesman for the Prime Minister called it ‘disappointing’ that strike action would take place amid major strains on the NHS, but said the Government was committed to reaching a ‘resolution’ .

Bowie painting bought for $4 at Canadian landfill sells for $88,000

Decomposing body of missing woman, 22, found in apartment after neighbors complained of 'rotting' smell for months | The Sun