Home » World News » ‘Am I slowing up?’ Biden says voters right to judge his health

Joe Biden has admitted he could “drop dead tomorrow” and that it was legitimate for voters to be concerned about his health.

Biden, 79, is expected to run for the White House again in 2024. Already the oldest-ever US president, he would be 86 if he completed a second term. 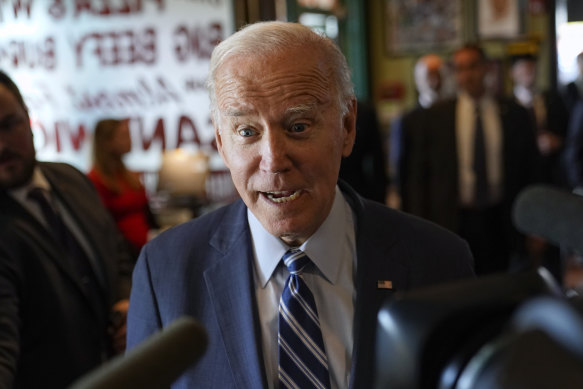 President Joe Biden says he should be judged on his performance, not his age.Credit:AP

Republican critics have seized on Biden’s verbal gaffes to claim that he lacks the mental capacity to serve another term in office.

Speaking to US broadcaster MSNBC, Biden was pressed on his own mortality by interviewer, Jonathan Capehart. “I could get a disease, I could drop dead tomorrow,” Biden said.

“I think it’s a legitimate thing to be concerned about, anyone’s age, including mine. I think that’s totally legitimate,” the president said.

“But the best way to make a judgment is to, you know, watch me. You know, am I slowing up?

If voters have doubts about his physical and mental competence, they should support another candidate, Biden said. “Right now, knock on wood, I do not want to jinx myself, I am in good health.

“All of my – everything physically about me is still functioning well, so you know, and mentally too, so,” the president said. He added that it was his intention to run again but no formal decision had been taken.

However, Biden appeared to duck questions over whether his wife, Jill, wanted him to run again.

Under constant media glare, even the smallest incident has triggered speculation over whether the president will run.

Physical stumbles, such as when he fell off his bike over the summer, have been seen as an indication that the president is on the wane.

The most recent was when he invited Jackie Walorski, a Republican Indiana congresswoman, to speak at a conference on food insecurity, weeks after she had been killed in a car crash.

Officials have also been concerned by Biden’s tendency to veer off script, as he did in March when he appeared to call for Vladimir Putin’s removal from office.

CRAIG BROWN: Spaghetti for me please… and make it snippy!