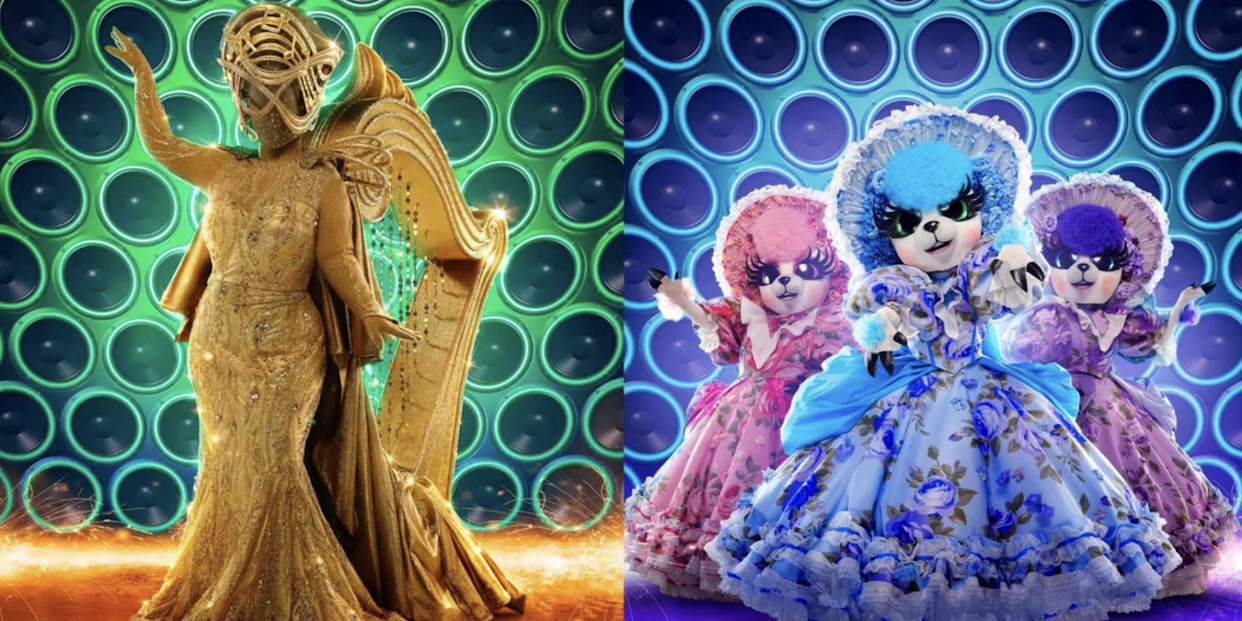 Three months ago, on the very first episode of The Masked Singer Season 8, judge Ken Jeong declared the Harp the “frontrunner.” Ken isn’t right about many things when it comes to this show — he did think the Harp was Jennifer Hudson, and he was wrong about that — but as this season came to a (somewhat predictable and anticlimactic) close on Wednesday’s finale, his prophecy indeed came true. The Harp unsurprisingly won the Golden Mask trophy. And while she didn’t turn out to be J.Hud — or Fantasia or Jordin Sparks, as the other judges had previously guessed — she was someone with a connection to American Idol: singer/actress Amber Riley.

The Harp’s most notable clue on that foreshadowing Season 8 premiere (during which judge Jenny McCarthy-Wahlberg also portended, “See you at the finale!”) was when the Harp revealed that when she was a teenager, she auditioned for “the biggest show in the world” but “didn’t fit the mold and was turned down.” Well, Amber famously tried out for Idol at age 17, but didn’t even make it past the producers. “You know what? I still work on Fox and I get paid! Thank you, American Idol,” she later gloated to Access Hollywood, after she got her big break on Fox’s Glee. And now Amber was back on the Fox network, and she not only did she make it past her Masked Singer audition, but she actually won this time.

Not to harp (heh) on this too much, but it seemed like the fix was in from the start. (“We love that Fox family!” judge Robin Thicke smirkingly declared this earlier in the season.) But no one could claim that Amber didn’t earn her Golden Mask with her grand finale performances.

On Wednesday, the finalists each sang twice, first doing an “anthem that means something personal to them” and then putting “a unique twist on a pop classic.” And Amber wowed both times. Her first number, Lady Gaga’s prophetically titled “Edge of Glory,” was glorious indeed. Jenny told her, “Girl, you put every awards show to shame just then, because that was by far, in all eight seasons, the best performance I’ve ever seen on our finale show!” And the Harp’s second song, a powerhouse gospel version of John Mayer’s “Gravity” complete with a robed choir, had Robin raving, “That is, hands down, one of the best thing we’ve heard on this stage. You just took that into the stratosphere, into the church, to the moon!” And Nicole Scherzinger, the judge who guessed the Harp’s identity correctly, gushed, “You’re anointed, sis. … That is the power of God in here. You are truly one of the best that has ever graced our stage.”

While Amber’s victory may have seemed preordained or even rigged, the two performances by her opponents, runners-up the Lambs, weren’t exactly mere fluff. In fact, midway through Wednesday’s episode (which, it should be noted, was herstorically the first-ever all-female Masked Singer finale), Ken even said the Harp and the Lambs were in a “dead heat.” And he was right about that too.

The first trio to make it to a Masked Singer finale — doing what another family band, Hanson, aka the underrated Russian Dolls, sadly could not — the Lambs kicked things off with an effervescent “I’m Every Woman.” Jenny called the performance “phenomenal,” and Nicole said it was “brilliant” and a “true embodiment of women supporting women.” But these pop-starlets-in-sheep’s-clothing’s second number, a “lamb-orous” rendition of Foreigner’s “I Want to Know What Love Is” with majestic orchestral accompaniment, was the one that made the frequently flip-flopping Jenny proclaim, “You wanna know what love is? Well, you’re gonna feel it… when you win The Masked Singer!”

We sure know what love is after that performance, #TheLambsMasks! ❤️ #TheMaskedSingerpic.twitter.com/u6WEgFMhBa

“I felt like we are at the reunion tour!” Nicole cried out, referring to the Lambs’ clue about how they had gone their separate ways for years. With a tip-off like that, I could maybe see why the judges thought these musical muttons-with-chops could be the Corrs or three-fifths of the Spice Girls (although none of the Spices, aside from maybe Sporty, could bleat quite like this). Other guesses, like HAIM, the Chicks, or, um, the Kardashians, made less sense. The judges sure got the wool pulled over their eyes!

But so many of the clues this season led to Wilson Phillips, which Robin and Nicole eventually figured out. And if Ken and Jenny had held on for just one more day and listened closely on Wednesday, one of the Lambs’ puns — about recording a farm animal-themed reunion album called Pet Sounds Vol. 2— would have made it especially clear that two of these beautiful harmonic voices belonged to the daughters of Beach Boy Brian Wilson.

"For a long time, I didn't think that we would be singing together on the stage ever again. And about 14 years went by. I never gave up on the three of us getting back together," Carnie Wilson stated. "This has been an incredible experience. … We wanted to stretch ourselves as artists, and we have little lambs at home, and we wanted to make them really proud of us." And Wilson Phillips had a lot to be proud about, exiting the show with a dazzling performance of their timeless signature song, "Hold On," while Ken absolutely freaked out.

And so, with the Lambs settling for a respectable second place, Amber Riley joined the Masked Singer Hall of Fame, alongside past champs T-Pain, Wayne Brady, Kandi Burruss, LeAnn Rimes, Nick Lachey, Jewel, and Teyana Taylor. And while she came to the show with a long résumé that includes a Screen Actors Guild Award and Laurence Olivier Award, she seemed visibly moved by this honor — even before she was revealed, when she was softly weeping behind her mask.

"When I started this journey, I had no idea just how much this competition would mean to me," she confessed. "I've spent years in an industry that doesn't necessarily celebrate who I am all the time. In Hollywood, you can be overlooked based on a more shallow viewpoint. But being able to be the Harp and step out in just my talent alone. …This show has given me the opportunity to reintroduce myself to the world on my own terms. … I wanted to win it not just for myself, but for all the other girls who’ve felt less than perfect. Do not underestimate us. We have greatness inside."

The Masked Singer will return in spring 2023, but before we sign off for the year, allow me to deliver one last rant about this Season 8’s terrible format, in the vain hope that some power-that-be from Fox might read this, pay attention, and correct course in Season 9…

The show implemented a major format change this fall — presumably to lure celebrities like William Shatner, Eric Idle, or George Clinton, who might not have wanted to commit to a full season — with each week featuring an instant double-elimination. One problem with this structure was several singers who likely would've at least made the semifinals under typical circumstances, like Montell Jordan, Chris Kirkpatrick, or the legendary Gloria Gaynor, went home after giving just one performance. Additionally, all of these one-and-done episodes totally robbed viewers of the chance to get invested — to play the guessing game at home and pore over each contestant’s clues over the course of several weeks — which has always been a huge part of The Masked Singer’s interactive appeal. And as for those singers that did stick around for a bit, the lazy producers didn’t even try to make their clue packages difficult. I guessed the identities of the Harp, Lambs, Snowstorm, Bride, and Robo Girl (the only contestants, out of 22 total, that actually survived for more than one episode) almost immediately. Sheesh, even Ken got it right a lot of the time. So, as a result, Season 8 wasn’t especially suspenseful. And it definitely wasn’t as fun as previous seasons.

That being said, I did enjoy this season’s fun themed episodes — a more welcome Season 8 twist — so if anyone from Fox is reading this, might I suggest Goth Night, Hair Metal Night, The Apple Night, or Grease 2 Night in Season 9? After all, stranger things have happened on The Masked Singer. See you next year.

Prince Charles, 71, ‘fit to be King’ as continues work during coronavirus crisis