Nicola Sturgeon was today accused of copying the ‘playbook’ of former US president Donald Trump after she rebranded her independence push as ‘Scotland’s democracy movement’.

The SNP leader is continuing to push ahead with her campaign to break up the United Kingdom despite suffering a massive setback.

The Supreme Court yesterday delivered a unaninmous ruling that the Scottish First Minister can’t legislate for another independence referendum without approval from Westminster.

In the wake of that ruling, Ms Sturgeon last night addressed pro-independence supporters at a rally outside the Scottish Parliament in Edinburgh.

The First Minister also predicted that the number of pro-independence supporters would increase in the coming weeks.

‘We are here as representatives of Scotland’s independence movement, a movement that will grow in numbers with every day that passes,’ she said. 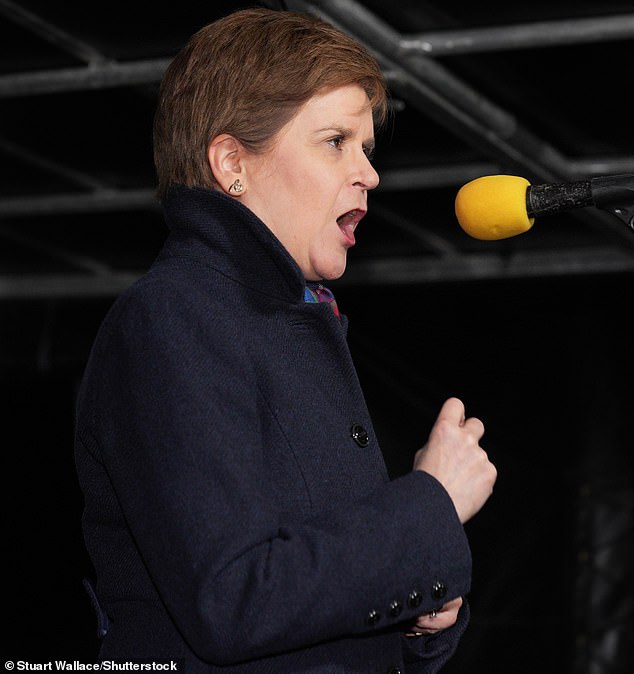 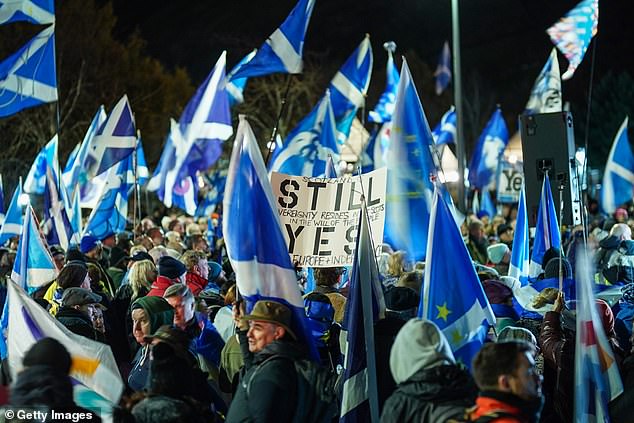 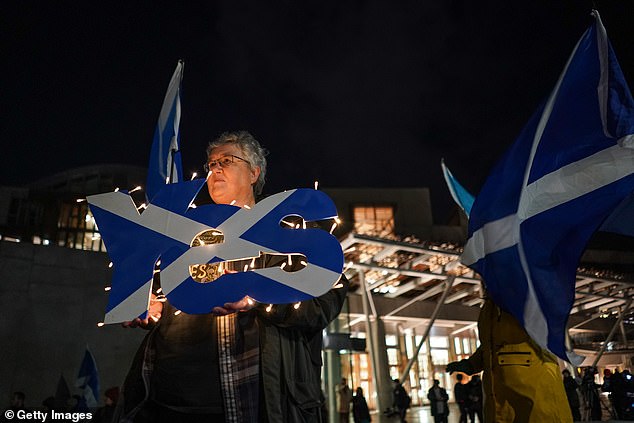 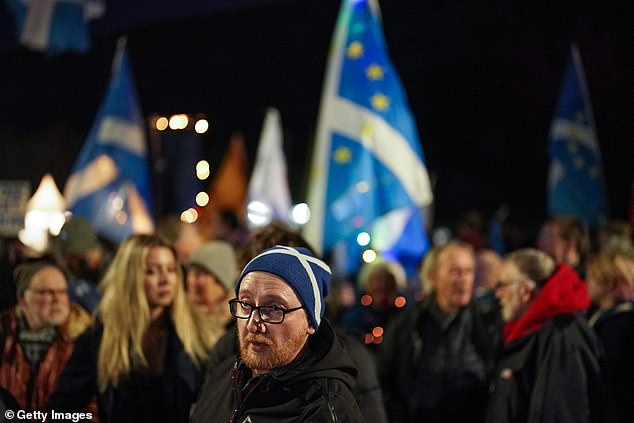 ‘We must shun talk of being imprisoned or shackled,’ says SNP MP in dig at Sturgeon 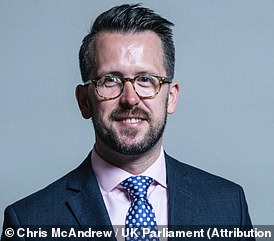 A leading SNP MP has urged pro-independence supporters to ‘shun talk of being imprisoned or shackled’ in an apparent dig at Nicola Sturgeon.

Stewart McDonald, MP for Glasgow South, insisted that ‘Scotland is not a colony and our people are not oppressed’.

He sent a series of Twitter posts in the wake of yesterday’s Supreme Court ruling, which found the Scottish Government cannot legislate for a new independence referendum without Westminster’s approval.

Mr McDonald wrote today: ‘Although the court has made clear the consent aspect of the Union lies with Westminster, we must shun talk of being imprisoned or shackled.

‘Our campaign is not a liberation struggle, but one of democratic, social and economic renewal and empowerment.’

Mr McDonald’s intervention was quickly seen as a swipe at Ms Sturgeon, the SNP leader.

After yesterday’s court ruling, the Scottish First Minister vowed to push ahead with her independence bid by reiterating her party’s plan to turn the next UK general election into a ‘de facto’ referendum.

Ms Sturgeon was challenged over her attempt to recast her independence bid as a ‘democract movement’ in the wake of the Supreme Court ruling.

Liberal Democrat MSP Alex Cole-Hamilton, who leads his party in the Scottish Parliament, said: ‘This “Scotland’s democracy movement” title is straight out of the Trump playbook and can get in the bin.

‘I was elected to oppose a referendum with more votes than any other candidate in the history of the Scottish Parliament. It’s my democratic duty to continue to oppose it.’

Scottish Conservative leader Douglas Ross also took issue with Ms Sturgeon’s choice of language after the First Minister was told she would have to have Westminster’s approval for a second independence vote.

He told the BBC’s Good Morning Scotland: ‘I think the language we’ve heard from Nicola Sturgeon over the last 24 hours about “democracy deniers” is very dangerous and harmful.

‘That’s not just an insult to me as a politician and a leader of a political party – I accept there’s rough and tumble in political debate – but there’s millions of Scots who don’t want another referendum right now.

‘It’s their First Minister telling them they’re “democracy deniers” because they want the focus to be on the global cost-of-living crisis, on the health service.’

Speaking at First Minister’s Questions in the Scottish Parliament this afternoon, Ms Sturgeon admitted she was ‘disappointed’ by the Supreme Court ruling.

But the SNP leader said she would ‘accept and respect’ the judgement.

She added: ‘The denial of democracy by Westminster parties demonstrates now beyond any doubt that the notion of the UK as a voluntary partnership of nations is not now, if it ever was, a reality.

‘It remains open, of course, to the UK Government to respect democracy and to reach an agreement with the Scottish Government for a lawful, constitutional, democratic referendum.

‘However, regardless of attempts by Westminster to block democracy, I will always work to ensure that Scotland’s voice is heard and the future of Scotland is always in Scotland’s hands.’

Downing Street said yesterday Rishi Sunak would ‘look to’ avoid another Scottish independence referendum while he is Prime Minister.

Asked whether Mr Sunak could rule out another vote while he is in office, his press secretary said: ‘I think that would be something that we would look to do.’

She stressed there had been a ‘once-in-a-generation referendum not too long ago and that result should be respected’. 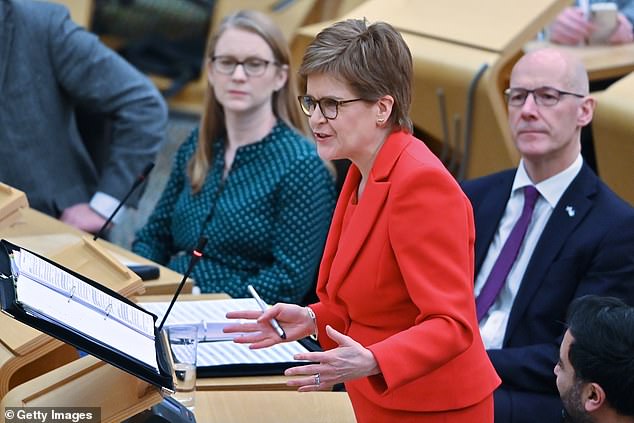 Speaking at First Minister’s Questions in the Scottish Parliament this afternoon, Ms Sturgeon admitted she was ‘disappointed’ by the Supreme Court ruling 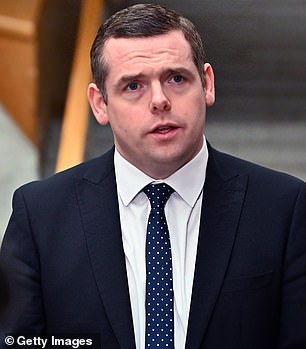 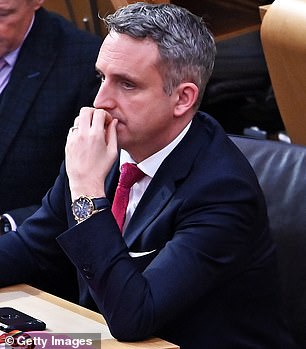 You think our nation is humiliated now? Wait until MPs revoke Article 50