Opposition leader Nikol Pashinyan blames cancellation of talks on the ruling party, accusing it of clinging to power. 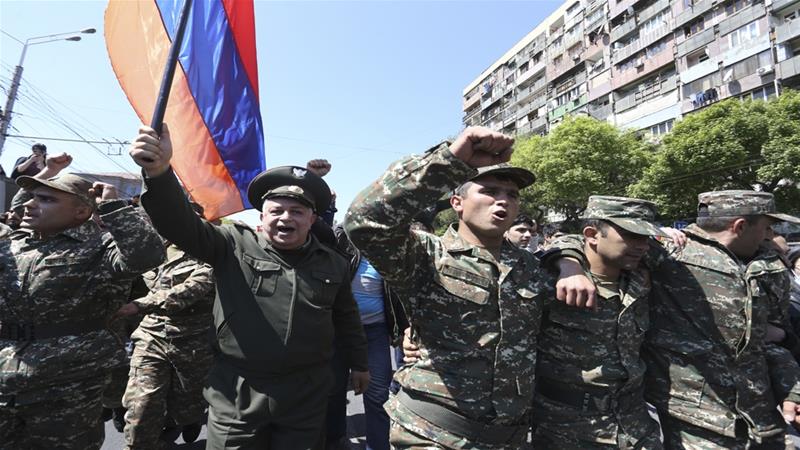 Armenian opposition leader Nikol Pashinyan has called on supporters to stage a rally on Wednesday after talks with the ruling republican party were cancelled.

Acting Prime Minister Karen Karapetyan’s office issued a statement, saying that “Nikol Pashinyan has unilaterally put forward new conditions with respect to the format, the agenda and media coverage of the meeting.”

“This is not a negotiation or dialogue, but presentation of one’s own agenda and point of view,” the statement read.

The two sides were supposed to discuss transition plans after the resignation of Prime Minister Serzh Sargsyan on Monday following almost two weeks of street protests.

Pashinyan blamed the cancellation on the ruling party, and accused it again of trying to cling to power.

On Tuesday, Pashinyan told reporters during a press conference that “the Republican Party of Armenia does not exist, only its ghost remains”.

“I do not need any guarantees from the RPA. We have a stronger guarantee, a guarantee of the people and the diaspora. I do not see any force that can resist the people of Armenia,” he added.

He also said that he would be against Karapetyan’s nomination even if he left the RPA.

Asked by a reporter whether Pashinyan would want to become prime minister, he replied: “If the people want me to be prime minister, I will take on that responsibility. We must ensure fair and free elections in Armenia.”

Concluding the press conference, Pashinyan stressed that no member of the ruling Republican Party can be a candidate for prime minister and they should not try to hang on to power. He also called for a peaceful transition of power.

Karapetyan said on Tuesday that “the current impasse can only be resolved through political negotiations and while we respect the wishes and freedom of the people on the streets, we need to adhere to the country’s laws and constitution”.

Following the cancellation of the transition talks, Pashinyan called for civil disobedience, starting on Wednesday.

Students from a number of universities heeded the call, and announced a student strike.

Armenia already saw 11 days of protest against the nomination of ex-president Serzh Sargsyan for the post of prime minister, resulting in his resignation.

The country had amended its constitution, from a presidential system to a parliamentary one in a 2015 referendum, making the presidency largely ceremonial and strengthening the office of the prime minister.

This allowed Sargsyan, who served as the country’s president for a decade, to qualify for the post of prime minister.

In his address in Republic Square on Monday, Pashinyan declared “victory” and said “the revolution must not stop with Sargsyan’s resignation, but continue to final victory”.

Karapetyan, in his capacity of acting prime minister, subsequently called on the president to organise a meeting with parliamentary and extra-parliamentary political forces to discuss the current domestic political situation and possible ways of resolving it.