Home » World News » Armistice Day: How the centenary of the end of WWI is being marked

On this day in 1918, world leaders signed the Armistice ending the war and its four years of bloody conflict.

In Britain, the Queen and other members of the Royal Family have joined thousands at the Cenotaph to remember the fallen of all conflicts.

Here is how Armistice Day is being marked around the world:

At 11am, church bells rang across the country at the same time as a national remembrance service at the Cenotaph in London.

Prince Charles led the nation’s tributes by laying a wreath on behalf of his mother for the second year in a row. 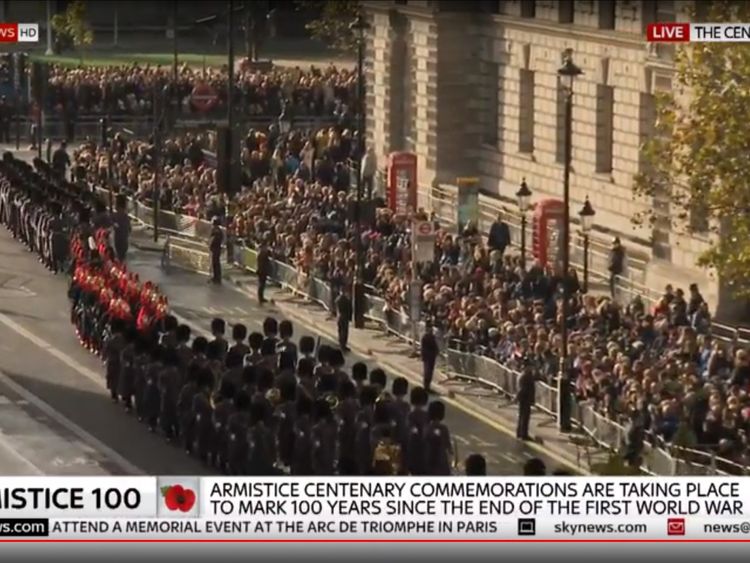 An equerry laid a wreath on behalf of the Duke of Edinburgh.

The Queen watched the Whitehall service from the balcony of the nearby Foreign and Commonwealth Office.

For the first time, a German leader laid a wreath at the Cenotaph.

President Frank-Walter Steinmeier performed the duty on behalf of his nation in an historic act of reconciliation between the two countries.

Big Ben struck at 11am to mark the hour the Armistice was signed.

At 12.30pm, after the wreath laying and the traditional Royal British Legion’s Veterans Parade, bells will begin to ring out across the country and internationally. The People’s Procession of 10,000 people will them march past the Cenotaph.

Flames will light up the moat around the Tower of London at 5pm.

The day will conclude with a service of thanksgiving at Westminster Abbey from 6pm.

The Arc de Triomphe on the Champs-Elysees in Paris staged the biggest event.

It was attended by up to 70 world leaders including US President Donald Trump and Russia President Vladimir Putin.

The ceremony at the Tomb of the Unknown Soldier on Champs-Elysees avenue commenced at 11am. 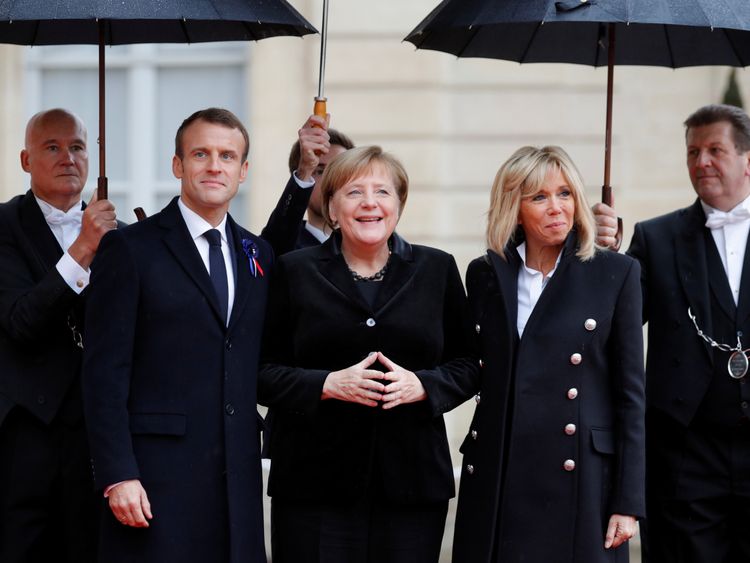 It featured warnings about the modern-day danger of nationalism.

France President Emmanuel Macron was seated between his wife and Mrs Merkel. 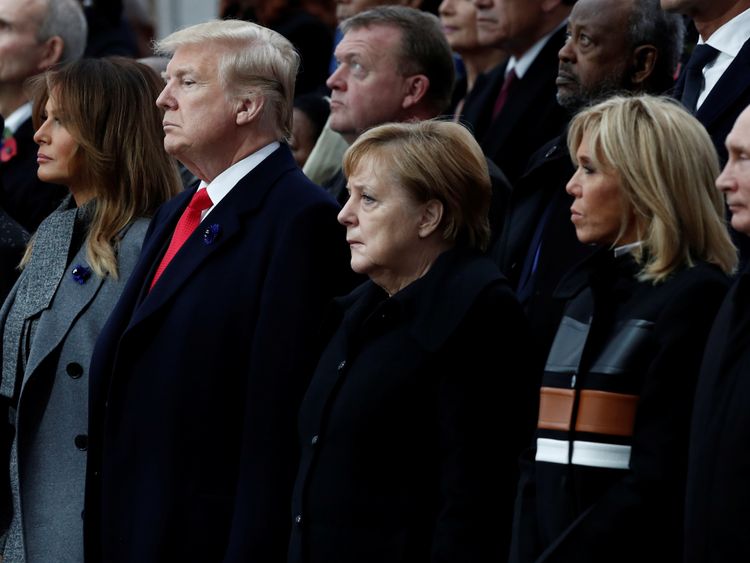 Elsewhere in France there was a 10.30am ceremony at the Australian National Memorial, in Villers-Bretonneux, Somme.

A parade at the Thiepval Memorial to the missing in the Somme also took place at 10.40pm and a ceremony at Newfoundland Memorial Park began at 11am.

First minister Nicola Sturgeon began the day by laying a wreath at the Stone of Remembrance in Edinburgh, before attending a service at the city’s St Giles Cathedral.

At 4pm, Ms Sturgeon and the Princess Royal will attend a memorial service at Glasgow cathedral.

More than 100 wreaths will be laid at the Edinburgh ceremony, where Ms Sturgeon is to be joined by members of the Armed Forces and fellow politicians. 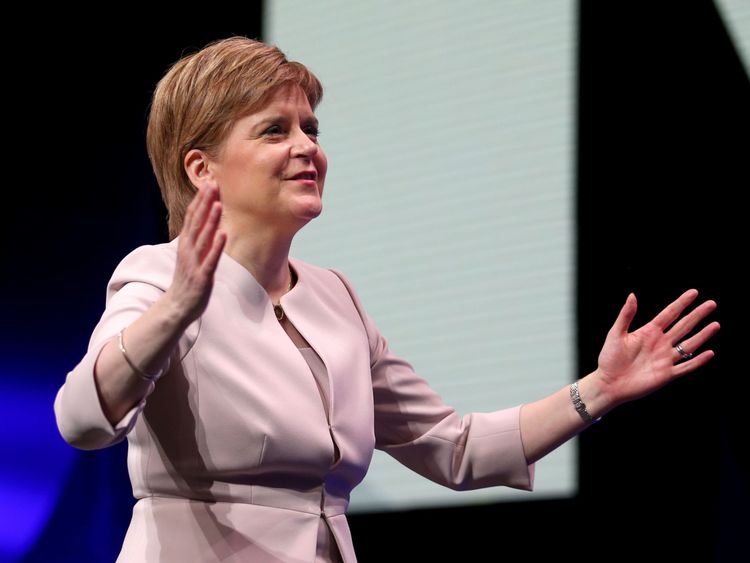 The city will then thank all those who served with a procession and service of commemoration in the Old Town.

Elsewhere, a two minute silence was observed at 11am at the cenotaph in Glasgow’s George Square.

Lord Provost Eva Bolander, in her role as Lord Lieutenant, led the proceedings and a guard of honour will be provided by the 52nd Lowland, 6th Battalion of The Royal Regiment of Scotland.

She will later accompany the Princess Royal at the afternoon cathedral service.

At the University of Glasgow, just before 11am, three guns were fired a total of six blank rounds in 15-second intervals from the grounds, before falling silent.

Parades will also be held in Aberdeen, Dundee, Inverness, Perth and Stirling.

A concert will be held from 1.45pm at former Craiglockhart Miliaty Hospital, Edinburgh, where shell-shocked officers including Wilfred Owen were treated.

President Michael D Higgins led the state commemorations to mark Armistice Day during a ceremony at Glasnevin Cemetery in Dublin. Elsewhere, ceremonies have been held in Enniskillen, the first town on the island to proclaim the Armistice in 1918.

The main remembrance ceremony was held at the Cenotaph at Belfast City Hall at 11am – attended by Irish tanaiste Simon Coveney and Northern Ireland Secretary Karen Bradley.

At around 7pm, a beacon will be lit at a public event in the City Hall grounds.

Elsewhere, a centenary Armistice Day service will be held at St Anne’s Cathedral at 3.30pm.

The Royal Naval Association held its annual remembrance service parade from its headquarters on Great Victoria Street at 10.30am.

Secretary of State for Wales, Alun Cairns, will represent the UK government at the remembrance service and will be joined by the Earl and Countess of Wessex and other guests. 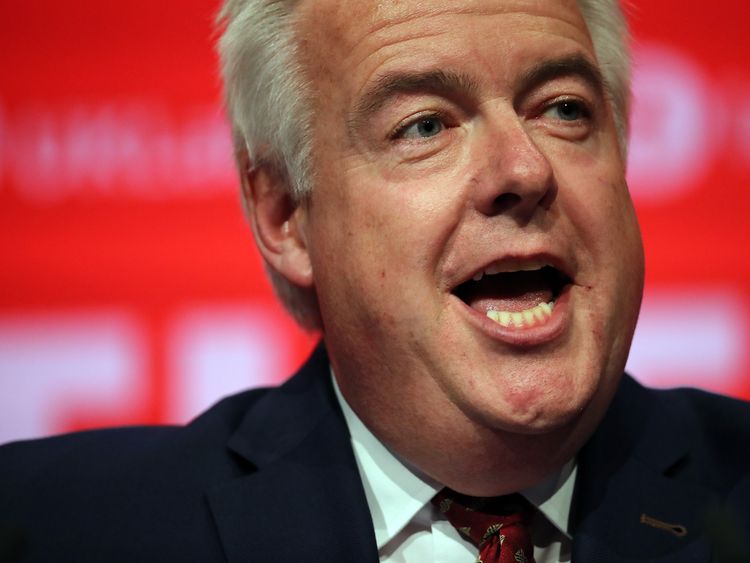 In Newport, a range of events will take place, including a performance of The Last Post by Gwent Music Brass Ensemble bugler Alex Linton. It will be followed by a lighting of the beacon at the Queen Elizabeth II playing field in Ringland at 7pm.

A remembrance ceremony was held at the municipal cemetery of Mons from 10.30am.

In the afternoon, a large parade with all Canadian regiments succeeding those who participated in “The Pursuit to Mons” will take place in memory of their passage through the Grand Palace.

The Last Post service took place at the Menin Gate Memorial in Ypres, Flanders at 11am.