An art deco family home in Essendon sold for $1.61 million at auction on Saturday, with buyers taking their time to bid after having the luxury of more choice on Melbourne’s biggest auction day on record.

There were 1755 auctions scheduled in Melbourne on Saturday, the highest number on Domain records, with a range of results from properties passing in to record-breaking sales. 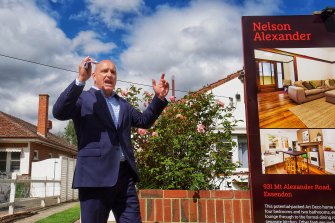 Though it looked like it may pass in, the four-bedroom home at 931 Mount Alexander Road, owned by the same family for 40 years, sold after two bidders competed. It took almost 20 minutes for the first bid of $1.51 million to be made.

The buyer, an expatriate investor who owned other properties in the suburb, paid just above the top of the advertised price guide.

Nelson Alexander Essendon partner and auctioneer Paul Harrison said the market was still strong price-wise, though buyers were becoming thinner on the ground as more homes were listed for sale.

“Everyone’s out of [COVID-19] lockdown now so there’s a lot more distractions for people too,” Mr Harrison said. “We were the only show in town there for a while.”

Buyers have more choice, with a record number of auctions scheduled.Credit:Luis Enrique Ascui

In the city’s west, bidders were not as laid back at the sale of an “iconic” Yarraville home that sold under the hammer for a suburb record-breaking $3.202 million.

The price for the four-bedroom home at 68 Powell Street broke a previous high set in October.

This home in Yarraville fetched a record price for the suburb.Credit:Hodges

An opening bid of $3 million led to two bidders competing for the keys.

Hodges Yarraville director and auctioneer Doris Garofolo said the home’s “grand streetscape” was well known by locals, so it was no surprise a local family looking for a bigger home was the winning bidder.

“Houses like this, larger family homes, don’t come up that often in Yarraville, so when they do people jump on them,” Ms Garofolo said. “It will probably be another 10 years before something like this comes up again.”

The vendor, who had owned the property for more than 13 years, was planning a big celebration not only because of the sale, but also because it was his birthday on Saturday, Ms Garofolo said.

Closer to the city centre, a three-bedroom home at 186 Kerferd Road, Albert Park was also snapped up by a local family looking for a larger home. 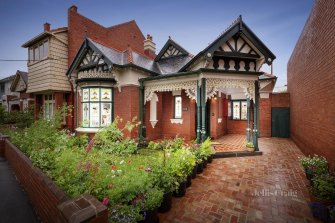 Jellis Craig Port Phillip director Simon Gowling said bidding opened at $3.3 million, with a quick succession of $20,000 bids pushing the home up to its sale price of $3.67 million, well above the $765,000 price the vendors, who had owned the home for 21 years, had paid.

“The buyers who bought it today [Saturday] had often walked past and seen the vendors doing the gardening out the front and almost asked if it was for sale,” Mr Gowling said.

He said properties at the top end of the market were still selling extremely well, with those in need of work finding it tougher to find a buyer.

“There’s renovated family homes and then there’s everything else,” Mr Rankin said, adding buyers were hesitant to buy fixer-uppers given the rising costs of building materials and shortage of builders, after a rush of home building during the pandemic.

He handled the sale of a partially-renovated home at 45 Dudley Street, Footscray which sold under the hammer for $1.12 million.

It was the first time the four-bedroom home had sold, with the 92-year-old vendor watching on, Mr Rankin said.

Another renovated home at 85 William Street, Newport, also sold for $1.9 million after passing in at auction. The home did not receive a bid, and went to a post-auction negotiation between two interested buyers, Mr Rankin said. 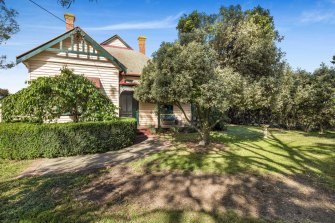 A historic home in Cardinia went to auction.Credit:Ray White

In Melbourne’s south-east, a historic home at 2005 Pound Road, Cardinia sold for well above expectations and the reserve at auction.

The heritage-listed property, one of the oldest in the area, sold for $2.075 million – $625,000 above the $1.45 million reserve. Five bidders competed, selling agent Ray White Pakenham’s Gavin Staindl said.

The home on two hectares of land was built in 1912 with the original owner paying just 100 pounds.

The current owners, who have held it for the past 20 years, were emotional after selling up, Mr Staindl said.

“There were tears of happiness about moving on from their family home,” he said

First picture of tycoon's daughter, 18, found dead at the bottom of villa swimming pool on family holiday in Majorca