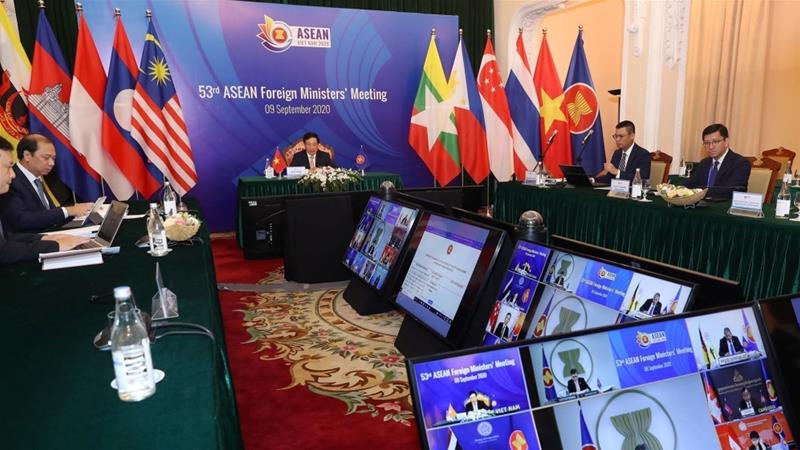 Southeast Asia’s top diplomats are holding their annual talks to discuss the coronavirus pandemic and rising tensions in the South China Sea amid escalating rivalry between the United States and China.

The 10-nation Association of Southeast Asian Nations (ASEAN) summit began via video link on Wednesday after being delayed by a month due to the pandemic.

Russia, Japan, Australia, South Korea and India are among those remotely joining the event hosted by Vietnam that will also include a 27-nation security forum.

“While the COVID-19 pandemic continues to unfold in a complex manner, and our people and businesses continue to be outstretched by its repercussions, the regional geopolitical and geo-economic landscape, including the South China Sea, are witnessing growing volatilities that endanger peace and stability,” Vietnam’s Prime Minister Nguyen Xuan Phuc said in his opening address.

His speech came at a time when China, the US, and several Southeast Asian nations remain embroiled in a tense standoff over actions in the South China Sea.

The long-thorny issue on the agenda is the territorial disputes in the South China Sea involving China, Taiwan and ASEAN members Brunei, Malaysia, the Philippines and Vietnam.

Beijing claims almost all of the South China Sea as its territory and has carried out live-fire drills in the waterway in recent months.

The US has responded by sending in warships and flying military planes over China’s naval exercises.

In July, US Secretary of State Mike Pompeo declared that Washington regards virtually all of China’s maritime claims in the disputed offshore region outside of its internationally recognised waters to be illegitimate.

The Trump administration effectively sided with the four ASEAN claimant states, along with Indonesia, which have all opposed China’s claims to virtually the entire waterway.

China then accused the US of sowing discord in the strategic region. Last month, its military reportedly test-fired two missiles in the South China Sea during exercises.

China has pushed for the resumption of negotiations with ASEAN on a code of conduct aimed at preventing armed clashes in the disputed waters.

Pompeo and his Chinese counterpart, Wang Yi, have confirmed their attendance at the ASEAN Regional Forum, which will also be done by video.

Also on the agenda is the crisis in the region created by the coronavirus pandemic.

The pandemic has delayed or cancelled dozens of meetings and shut out the colourful ceremonies, group handshakes and photo-ops that have been the trademarks of ASEAN’s annual gatherings.

Earlier this week, Vietnamese Deputy Foreign Minister Nguyen Quoc Dung said the talks would continue to focus on a regional response to the pandemic and ways to help member states recover economically.

The contagion has devastated the region’s manufacturing, export, travel and tourism industries and sparked the worst economic recessions in decades across the region of 650 million people.

Southeast Asian nations have been affected by the pandemic differently, with hard-hit Philippines grappling with more than 240,000 confirmed COVID-19 infections, including nearly 4,000 deaths, and the socialist state of Laos reporting just 22 cases.

The Philippines and Indonesia each have more than double the infections reported by China, where the outbreak started late last year.

The diplomat said Thailand has pledged to contribute $100,000 and ASEAN partners, including China, Japan and South Korea, were expected to announce contributions.

A regional stockpile of medical supplies has also been approved, and a study to be financed by Japan will research the possibility of establishing an ASEAN centre on public health emergencies, according to the diplomat, who spoke on condition of anonymity as he was not authorised to speak publicly.