Christchurch: Muslim volunteers have started arriving in New Zealand from Australia to help with the huge task  of washing the bodies of the dead.

Ali Armando flew in with a group from Brisbane, reporting to the makeshift crisis centre at Hagley College in Christchurch after Friday's deadly mosque terror attack. 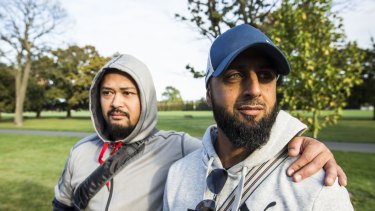 Volunteers are offering support for the families of the terror attack victims, security around the area and ghusl – the Islamic practice of washing the dead.

"We're ready so that as soon as they start releasing the bodies, we'll do the washing," Armando said.

He understood the bodies were still at the morgue but would start to be released on Sunday afternoon. It is not clear when funerals will begin, but graves have been prepared at a cemetery in Christchurch's eastern suburbs.

Armando said as soon as he received news of the terror attacks, he knew he needed to come to Christchurch.

"I'm going to jump on a plane and come and do whatever I can as a human being, as well as a Muslim," he said.

"The [alleged gunman] was an Australian himself, so as Australians we feel like we should do whatever we can do to help."

He said moral support was important and Islamic protocols needed to be followed, with families having to refrain from weeping or wailing.

"We believe the soul can still hear or understand what's happening around it, so we just be quiet, respect the body and do what needs to be done."

A makeshift crisis centre has been set up at Hagley College, where volunteers gather to lend a hand.
Armed police were still standing guard on the street outside the college as the volunteers arrived.

Tazrul Islam said he had also flown in from Auckland to help with ghusl.

"First the body needs to be washed and a prayer said over it before it can be buried," the 23-year-old said.

The [alleged gunman] was an Australian himself, so as Australians we feel like we should do whatever we can do to help.

"This is our chance to help our brothers."

Another man, heading into the college, said he had just flown in from Australia.

"One of my Fijian mates got shot, so we're here supporting him."

Boy, 15, 'spent half an hour throttling his mum to death in row over him getting a D grade then got his mates to make murder look like botched burglary’

Liverpool's mayor reveals his brother has died from coronavirus