A realisation the public may struggle to comprehend the risks and benefits posed by the AstraZeneca vaccine was a tipping point in the announcement that Pfizer would become the preferred jab for Australians aged under 50.

Professor Allen Cheng, the co-chair of the expert advisory group behind the decision, said there was no doubt the new advice released late on Thursday would be a blow to confidence in Australia’s vaccine rollout, already beset by delays. 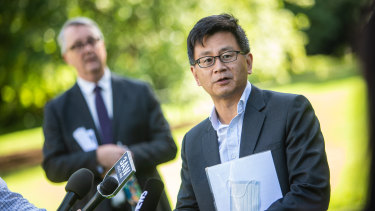 Professor Allen Cheng said the decision to name Pfizer as the preferred vaccine for those aged under 50 was difficult.Credit:Scott McNaughton

Experts on the influential federal government advisory group on Friday said they had spent almost a week weighing up the difficult call that will force an overhaul of the nation’s vaccine strategy.

It followed the news on Good Friday of the first Australian case of a rare clotting syndrome in a Melbourne man who had received the AstraZeneca vaccine.

Two key issues were on the table in their deliberations, which relied heavily on the assessment of experts in the United Kingdom.

There is the danger people could get and die from coronavirus in Australia amid the ongoing threat of leaks from hotel quarantine and the now “plausible” risk that the vaccine could cause a clotting syndrome, albeit in rare cases.

Studies have estimated that the thrombosis with thrombocytopenia syndrome may occur in about four to six people in every million inoculated with AstraZeneca, within 20 days of vaccination. It is estimated to cause death in a quarter of cases.

It is also suspected that it may be more common in younger people and women, but this is not confirmed.

“We have got a horrible disease – a lethal disease for older people with a horrible death.

“And you are having to weigh all of that harm from this new disease against an otherwise safe and effective vaccine we have got here … and a very rare but serious possible side effect.“

Professor Cheng said a tipping point was when consumer representatives on the advisory group were struggling to wrap their heads around these benefits and risks, leading experts to believe they couldn’t just leave it up to the public to weigh up whether they would get the jab.

“I think there was a realisation that it was … getting pretty complicated,” said Professor Cheng, who is also Victoria’s Deputy Chief Health Officer.

“The consumers on ATAGI [the Australian Technical Advisory Group on Immunisation] are probably going to be the most well-informed consumers in the country, having heard many hours of discussion that we had.

“They were saying they were really struggling with understanding risk and benefits and so on, with all those uncertainties. I think we felt that we sort of had to make a recommendation one way or the other, rather than being able to leave it entirely to consumers to make their own mind up.”

The advice resulted in attempts to balance the two pressing issues, by giving the green light to continue AstraZeneca vaccinations for the older people in priority groups much more likely to die from coronavirus, and a preference for Pfizer for the younger cohort.

People aged 49 or under will still be allowed to get the AstraZeneca vaccine if they wish, where the individual benefits are likely to outweigh the risks.

ATAGI executive team member Professor Kristine Macartney said she hoped that many people under the age of 50 would still consider receiving the AstraZeneca vaccine, including people with medical conditions that put them at higher risk of complications from COVID-19.

“I think people have different ways of assessing risk and their own tolerance of risk,” said Professor Macartney, also director of the National Centre for Immunisation Research and Surveillance.

“All of us take risks every day, whether we’re getting in a car and driving somewhere, crossing the road [or] taking a medicine for another reason.

“The committee really wanted to respect that and in providing advice to the government, but also recognise that they did have to be some signalling around which age the severity of COVID increases.”

Professor Macartney said because the syndrome was so rare, it was still unclear if it only affected younger people. “It’s rare across the board and people should appreciate that,” she said.