Workers would be able to take up to five days leave a year for IVF, endometriosis, vasectomies or serious menstrual pain under the first claim for reproductive health leave in Australia.

The move would provide leave provisions for health workers experiencing symptoms or treatments linked to menopause, poly-cystic ovarian syndrome, sperm and egg donations or gender reassignment and has been backed by the ACTU. 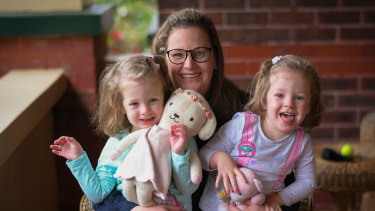 Kate Marshall, of the Health and Community Services Union initiated the push for reproductive leave after needing fertility treatment to have her daughters, Ava and Lucy.Credit:Eddie Jim

Victoria's Health and Community Services Union has put the claim for leave and other flexibility around reproductive health issues to employers in the Victorian Hospitals' Industrial Association, and the national Health Services Union wants unions around the country to adopt similar clauses.

ACTU president, Michele O'Neil backed the health union's claim that workers going through treatments including assisted reproduction, termination, prostate cancer and other conditions covered by the claim should not be forced to take sick leave or personal leave.

“The drain that these procedures causes in other forms of leave disproportionately affects women and trans people and this new entitlement would create a more equal and accommodating workplace – something we should always be working towards," she said.

“We stand behind HACSU members fighting for this new entitlement.”

Kate Marshall, assistant state secretary of HACSU and a national vice president of the Health Services Union, said the reproductive health and wellbeing leave recognised special needs connected to fertility and sexuality were not illnesses.

The claim "takes away a taboo and replaces it with an entitlement", she said and would boost workplace gender equality by removing stigma around reproductive issues that can hamper women's progress.

"We're committed to pulling down any barrier that prevents women from reaching their full potential in the workplace," she said. Ms Marshall initiated the claim, which is part of the union's 2020 mental health log of claims for its 10,000 members.

Similar entitlements in other countries had been found not to be rorted, she said.

Under the claim, which is in negotiation, employers may ask employees using reproductive leave to provide evidence including a doctor's letter, statutory declaration or medical certificate showing the reason.

As well as new leave, it would give workers the right to work from home or work flexible hours and make reasonable changes to the work environment to help alleviate symptoms or facilitate treatment.

"We would encourage governments and employers right across the country to get behind this initiative for women working in female-dominated industries like the health and the community services sector," he said.

"Many are on low pay and have low personal leave credits and the needs of women in this situation are extremely important. Going through IVF and other procedures takes an inordinate amount of time, and the timing is never known – we're dealing with biological uncertainties.

"We are encouraging our branches to pick this up and press those claims and we'd expect other unions to follow suit."

Associate professor Kate Stern, a fertility specialist at Melbourne IVF, said "we should have the opportunity to have time out from your workplace for things that are really important for your physical, psychological and reproductive wellbeing and health".

"It's very important to be able to access [services] appropriately without feeling there is any stigma associated with it."

"I had no personal leave left, so I went and had the embryo [which later split and became twins] implanted during my lunchbreak and had to go back to work for a meeting," said Ms Marshall.

"We want this to be one of those things where in 15 years' time where when my girls go out and get their first job they know they're going to get annual leave and reproductive leave and it's a given. This is what we've been fighting for."

She said the Victorian Hospitals Industrial Association, which was contacted for comment, had rejected the claim but negotiations continued.

How does Botswana fight corruption in Africa?

Burden of victory: What should happen to European ISIL prisoners?