Want climate news in your inbox? Sign up here for Climate Fwd:, our email newsletter.

HARDEN, Australia — It’s been a year of extremes for this country. The hottest summer ever. Torrential rains in the north. A crippling drought in its southeastern farm belt.

Now, with national elections scheduled for May 18, a vital question looms: To what degree will climate change sway the way Australians vote? The answer could provide important lessons for other democracies in the age of climate change.

Australia is acutely vulnerable to climate change, just as it is also a culprit. The continent has warmed faster than the global average; its cherished Great Barrier Reef has been devastated by marine heat waves; and heat and drought this year took a bite out of the country’s economy, according to a top official of the country’s central bank. At the same time, central to its prosperity is the extraction of the dirtiest fossil fuel: Australia is the world’s biggest exporter of coal for power generation.

Against that backdrop, the governing conservative coalition, led by the Liberal Party, is under pressure in key districts as independents assail longstanding members of Parliament like Tony Abbott, a former Liberal leader and prime minister, over their climate positions.

To understand what it all means, I recently drove through southeastern Australia, the country’s most populated area, to speak to voters, both urban and rural, about climate change.

In rural districts, voters who traditionally send conservative lawmakers to Parliament are talking openly about the effects of climate change — in some instances, even coming out to protest. And, in poll after poll, climate change has climbed the ladder of concerns among the electorate.

More than 60 percent of voters identified climate change as the top “critical threat” facing Australia over the next 10 years, while nearly the same share said the government should take steps to address global warming even if that involves “significant costs,” according to a poll by the Lowy Institute, an independent research group.

Another poll by Ipsos, a market research firm, found that half of all Australians gave the government “poor” marks on managing climate change.

My road trip began in Melbourne, continued on to Sydney and then took me west to the land of Angus cattle and Merino sheep in the vast, parched countryside of New South Wales. On these undulating hills and bare fields, generations of farmers have raised livestock, sown wheat and canola, and elected conservative lawmakers to Parliament. Climate change, for the most part, they used to dismiss as city talk, or just “rubbish,” recalled Peter Holding, 64, a third-generation farmer who lives near a hamlet called Harden.

These days, the soil is so dry that a sparse occasional rain shower barely dampens the dirt. Feed prices have skyrocketed. Dams have dried up. Farmers have thinned their stocks.

And in a country town called Wagga Wagga, where talk of climate change would have been shocking not long ago, more than 200 people showed up to a climate change protest rally in March that Mr. Holding, who is active in a group called Farmers for Climate Action, helped to organize. “Don’t Vote for Fossil Fools,” read one handmade sign. “Denial is not a policy,” read another. 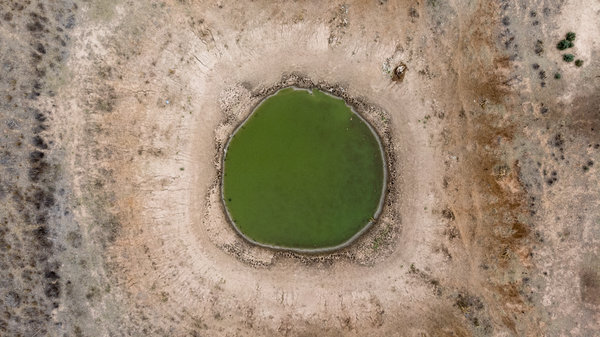 “You would never run a rally like that 10 years ago, but it’s become blatantly obvious things are changing,” Mr. Holding said. “I don’t think we’re going to get back to normal.”

It all worries Guy Milson. A 68-year-old rancher, he has, he said, “come around” on climate change. The evidence has become impossible to ignore. The drought has scorched his land. He has had to sharply reduce his herds of cattle and sheep. This blistering summer, even the old, hardy eucalyptus trees roasted in the heat.

“We’ve never put so much carbon into the atmosphere,” Mr. Milson said. “It can’t be normal.”

But all his life, he has been loyal to the right-of-center Liberal Party. He sees the incumbent energy minister, Angus Taylor, a friend, as a possible future prime minister. And he worries that fear over climate change will punish his party at the polls, especially in swing seats around the country. He is also wary of ditching coal, just now. It is too important to Australia’s economy. He says bigger polluters like China should act first.

The average Australian’s carbon footprint is slightly lower than that of an American. The country’s total emissions have risen to their highest level and it is not on track to meet its Paris climate agreement pledge, according to independent monitors. And a scathing report published recently by a research and advocacy group called the Climate Council said the “lack of climate change action is the defining leadership failure of the past decade.”

Farther west, I found Edward and Stephanie Gebhardt sitting on their front porch, scanning the skies for rain. The Gebhardts bought a farm just before the latest drought began to set in. Now nearly all their reservoirs were dry. In the muddy slope of one, a thirsty lamb got stuck and died. The fields on which they would normally sow wheat this time of year remained ashen. “It’s almost as if the seasons have shifted,” said Ms. Gebhardt, 31.

Neither of them doubted climate change. Neither had much faith anymore in either of the two conservative parties, the Liberals and their coalition partners, the National Party, that their families had long voted for.

“Honestly I struggle to vote now,” said Mr. Gebhardt, also 31. “No one has come out with anything to help us.”

Voting is compulsory in Australia, so Ms. Gebhardt signaled her dissatisfaction in the latest state polls by voting for a gun rights party called Shooters, Fishers and Farmers. It was a “donkey vote,” she said, the term used here for a ballot protest.

The energy minister, Mr. Taylor, defended what he called the governing coalition’s “balanced approach” to gradually reduce emissions in the coming years, while promoting hydropower and investments in solar and wind energy. “A majority of people want to see action,” he said. “They want it to happen at a sensible pace and without substantial costs to them.”

The Labor Party, the official opposition in Parliament, proposes a faster reduction in emissions and a target of 50 percent renewable energy by 2030. But it has steered clear of the idea of a carbon tax, which another Labor government implemented 10 years ago; that Labor government was then ousted by a Liberal Party leader who campaigned on a promise to “ax the tax.”

That Liberal Party politician — Mr. Abbott, who once suggested that Australia pull out of the Paris climate accord but has since changed his position — is now facing one of the biggest political challenges of his career.

On the way back from ranch country, I stopped by his district, in the suburbs north of Sydney. Neither Mr. Abbott nor his aides responded to requests for an interview.

But one of his main challengers, a lawyer named Zali Steggall who is Australia’s only Olympic medalist in Alpine skiing, eagerly explained why she had decided to run for office in an effort to unseat him. “Tony Abbott has been a massive hand brake on our policies on climate,” she said.

Ms. Steggall, an independent who is running for the first time, was speaking on a warm Wednesday evening at the North Curl Curl Surf Club. She sat before a roomful of voters, with a picture-perfect view of the South Pacific behind her. Surfers went in and out of the waves. The audience, mostly middle-aged white voters, asked about the minimum wage (she said she was not sure raising it would be realistic), immigration (she agreed with the governing coalition that fewer immigrants should be allowed in) and how to bring down the price of electricity (“We need an orderly retirement of coal,” she said).

Ms. Steggall said she favored lifting a luxury tax on electric vehicles and promised to promote renewable energy, but only gradually. She touched on an anxiety that I heard repeatedly from Australian voters: “It’s not about taking dramatic action that will change your livelihood or lifestyle,” she assured her audience.

Ms. Steggall is not alone in taking on Liberal Party stalwarts, either. She is among several independent candidates. Nearly all are campaigning on climate change.

“The fact that all these people are running is a huge message from the electorate,” said Ebony Bennett, deputy director of The Australia Institute, a research group. “We’ve never seen anything like it before.”

Somini Sengupta covers international climate issues and is the author of “The End of Karma: Hope and Fury Among India’s Young.” @SominiSengupta • Facebook