The awful tooth: Backlog of patients waiting to see a dentist stands at 40 MILLION… with fears that HALF of all practices could stop offering NHS care from April, experts warn

MILLIONS of patients face waiting years to see a dentist as thousands of surgeries prepare to close to NHS patients.

There is now a backlog of 40million appointments, but half of all practices could stop offering any NHS care from April, British Dental Association research has revealed.

It also found the equivalent of a whole year’s worth of dentistry has been lost since March 2020, leading to a rise in patients going to A&E in agony or resorting to desperate measures such as pulling teeth out with tweezers.

Many dental surgeries say it is no longer financially viable to provide NHS care, and the BDA has warned of the sector’s ‘chronic underfunding’ and an ‘exodus’ of dentists.

Many patients now have no option but to go private – when treatment can cost hundreds or even thousands of pounds more than on the NHS.

New figures show more and more dentists are going private, and the survey by the BDA found half of dentists are not confident their practice will continue providing any NHS services from April this year.

Two thirds of dentists said they are planning to reduce their NHS commitment, with one third planning to go fully private in the next year.

Even before the pandemic, dentistry was in crisis and it is the only part of the NHS operating on a lower budget than a decade ago.

Many dental surgeries say it is no longer financially viable to offer NHS treatment, leading to an ‘exodus’ of dentists into the private sector. 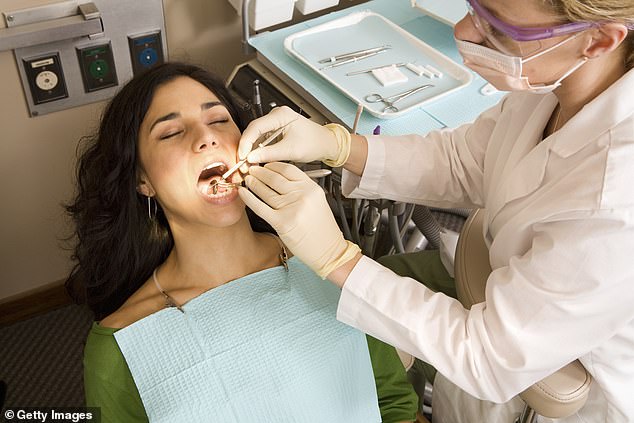 With MPs set to debate the future of dentistry this afternoon (THU), the BDA has warned of ‘chronic underfunding’ with Government funding slashed by one third in the past decade.

This has led to a staffing crisis, and 93 per cent of NHS dental practices say they struggle to recruit dentists.

Eddie Crouch, chairman of the BDA, said: ‘A year’s worth of dentistry has been lost, and we are yet to detect any real urgency from government.

‘Patients are bottling up problems and oral health inequality is set to skyrocket. Yet far from this crisis being a Covid blip, it now risks becoming a fact of life for families across England.

‘Ministers have recognised the system is rotten, but there is still no timetable for change and no tangible commitment to row back on a decade of cuts.

‘Dentists need to see a light at the end of the tunnel. Exhausted colleagues are making exit plans while desperate patients are facing yearlong waiting times.

‘It will take more than warm words to halt the exodus from this service and restore access to millions.’

Last month the NHS pledged an extra £50 million for dentists to provide extra urgent care for patients until the end of March.

This will see them conduct an extra 350,000 appointments under a new ‘treatment blitz’, including more evening and weekend work.

But the BDA say this one-off funding injection is insufficient to tackle the chronic and long-term pressures on the service.

Trump is in 'a good position' ahead of showdown this week to challenge election, ex-top official says