The BBC is investigating Panorama journalist John Sweeney after he was secretly filmed buying champagne, gin and flaming sambuca for himself and a young woman he hoped would reveal information on far-Right activist Tommy Robinson.

Earlier this year, Mr Sweeney had contacted Robinson’s former assistant Lucy Brown as part of an investigation for the BBC1 programme in conjunction with anti-extremism charity Hope Not Hate.

After receiving his message, Ms Brown got in touch with Robinson, 36, who has since started serving a nine-month prison sentence for being in contempt of court.

The pair colluded to arrange to film Sweeney undercover so that Robinson could then post the footage as part of his attempt to expose how he believes the BBC is trying to tarnish him. 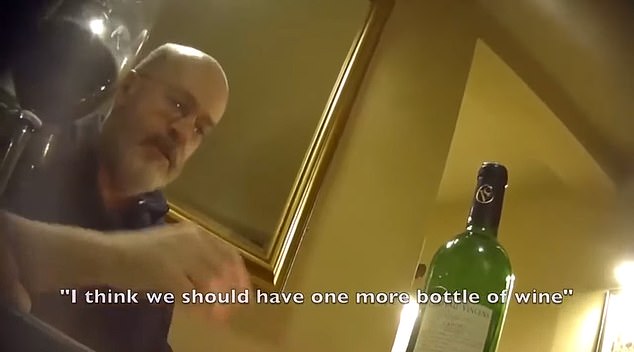 Wearing an undercover camera, Ms Brown met Sweeney, 61, at a pub in February this year. He ordered champagne and double shots of gin.

In the video he says: ‘Here I am, on expenses, in a boozer with the dog and a fire.’

He later orders ‘one more bottle of red wine’ before saying: ‘F*** it, no expense spared’ and goes on to ask for two glasses of brandy and two shots of the liqueur limoncello.

At the end of the meal, Sweeney is filmed saying to a barman: ‘Have you got any flaming sambuca, and two Kir Royal and then the bill.’ 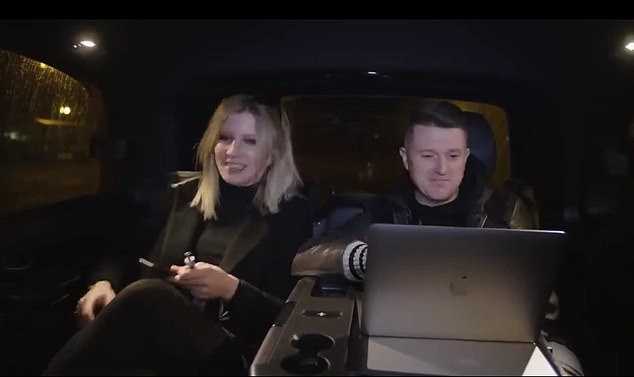 Mr Sweeney bought champagne, gin and flaming sambuca during the meeting, which was filmed secretly by former assistant Lucy Brown. Robinson, 36, is serving a nine-month jail term after he was found to be in contempt of court.

Sweeney was also filmed saying he had pre-ordered a taxi because he had his dog with him, stating: ‘You know why, don’t you? Asian cab drivers don’t like taking dogs, it’s embarrassing.’

This prompted Ms Brown to accuse him of racism, as did Robinson when he saw the footage.

Robinson describes her in the footage as ‘steaming’ and says: ‘Mission accomplished, lots of alcohol was consumed tonight for the greater good.’ Sweeney later met Robinson to view the footage.

A source said: ‘The BBC have got themselves in a tailspin about this. They want to investigate Tommy Robinson but there are questions that need to be answered about a journalist operating in this way.’ It is understood Sweeney is in Italy while he awaits the BBC’s decision over how they deal with the video.

The BBC and Sweeney declined to comment last night but the Corporation insisted he paid for the drinks himself. It refused to confirm whether the Panorama on Robinson would be screened.

Man in serious condition after targeted shooting in Burnaby