We have got a few thunderstorms in the forecast

“The air is coming all the way from the very far north, from the Arctic Circle in fact. So below average temperatures across northeastern Europe. In the south it is obviously hot sunshine.”

While parts of the continent will calm down on Thursday and into Friday following reports of huge hail and gusty winds, northeastern part of Europe will face brutal weather conditions.”

Mr Schafernaker continued: “But in the very far northeast of Europe, cool in Helsinki – only around 14C.

“And that fresh weather is going to continue into Friday as well. Warsaw there at only 23C but pretty warm there in western parts of Europe. Highs in the 20s and not far off 30C in some areas. 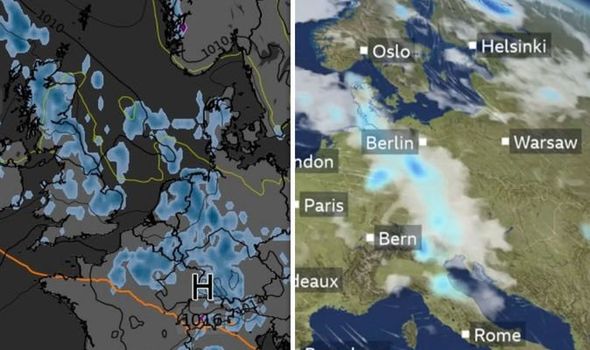 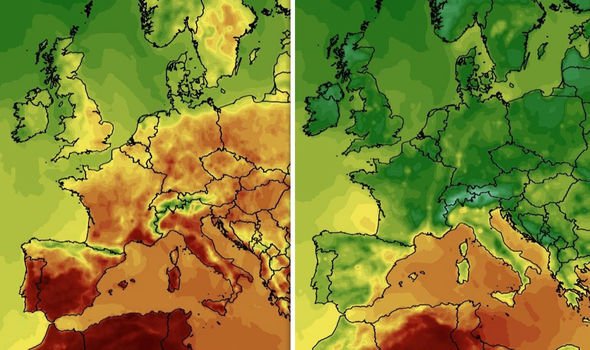 “If you are heading off to Madrid it really is going to turn very hot towards the end of the week.

“Highs could get up to just shy of 40C, and then it looks as though we have got a few thunderstorms in the forecast.”

Spain and Portugal are set to see widespread sunshine through Friday with some “scorching” temperatures.

The BBC forecaster added: “It is very warm for Bordeaux at 31C and actually the warm and humid weather is extended into southern parts of the UK.” 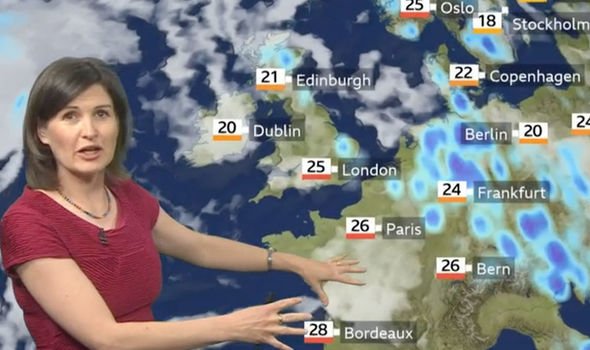 Winds swept over a caravan, killing two elderly Czech nationals, and a Romanian woman and boy died after a roof collapsed at a restaurant in Nea Plagia.

Gales also pushed a tree into a hotel in the town of Potidea, killing a Russian man and boy.

More than 100 people are thought to have been injured by the weather, with patients treated in hospital aged between 8 months to 70 years old.

Greek Prime Minister Kyriakos Mitsotakis, who took over the government on Sunday, cancelled all meetings to address the disaster. 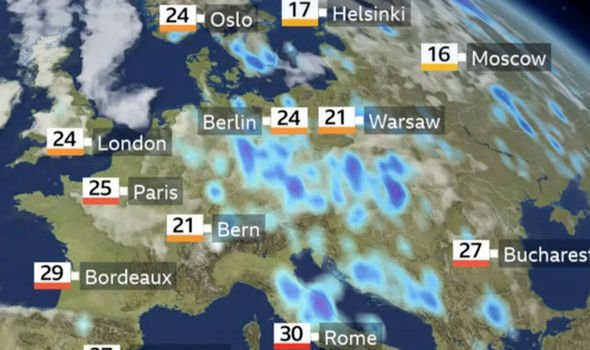 Michalis Chrisochoidis, citizen protection minister overseeing operations in the area, also said: “I want to express my sorrow on behalf of all. We mourn for the loss of these souls.

“We are in solidarity with their relatives, with the people who have lost their families.”

Hailstones found in the city of Utiel were the same size of tennis balls and had caused damage to buildings and vehicles.

The weather chaos was worsened by what local news reported as “hurricane winds”.

Valencia experienced a dramatic plunge in temperatures, with the mercury falling from 33.5C to 20C within just ten minutes.

New Zealand reopens mosques that were target of deadly massacres

Donald Trump, Kim Jong Un Meet At North Korean Side Of The DMZ

U.S. Secretary of State calls for EU to condemn Iran over tanker