BBC Weather meteorologist Carol Kirkwood said heavy and persistent rain will plague some areas of southern England and Wales for most of the day. The Met Office has issued a short-term yellow rain warning covering the majority of the south of England, sparking concerns of potential flooding. The warning will remain in place through Wednesday into Thursday and residents in the affected area have been told to expect some flooding and a small chance of “fast flowing or deep floodwater.”

Ms Kirkwood said: “There’s an area of low-pressure, it will deliver some heavy and persistent rain and also strong winds, particularly around the coast of Wales, the southwest and the English Channel.

“Overnight we’ve seen this rain move northwards, it’s produced sleet and snow over the hills in northern England. North of that, it’s a cold start of the day. There’s some showers here, some of which are wintry and increasingly so.

“But it’s the rain across England and Wales that will be the main feature today. Some heavy and persistent rains to Wales, the Midlands, East Anglia, and point south.

“We may well see some brighter skies in the far south of England but that will be the exception rather than the rule. We get 20mm to 30mm of rain from this, potentially a little bit more.” 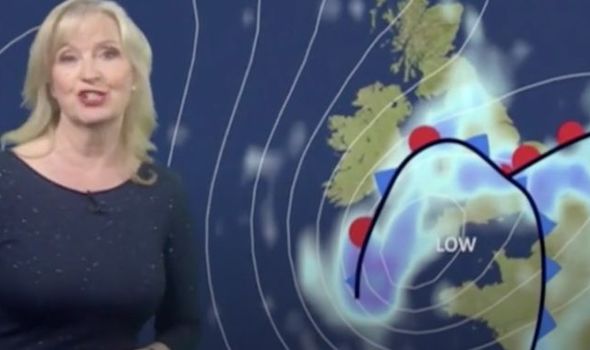 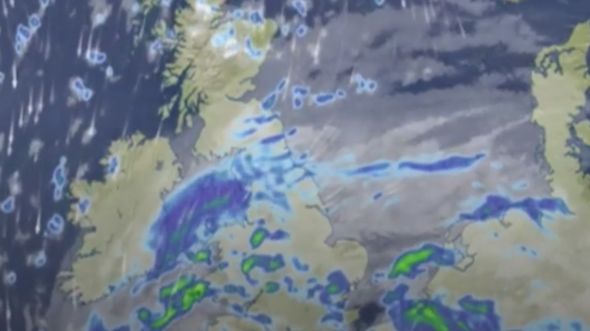 The BBC Weather forecaster continued: “It’s falling on already-saturated wet grounds so there is the risk of localised flooding.

“Through this evening and overnight the rain starts to push away into the near continent. We’ve got northerly wind so, increasingly, we’ll see some snow showers, mostly in the hills but some of the heavier bursts in the north.

“With temperatures below 0C, you won’t be surprised to see there will be some frost around and also the risk of ice on untreated surfaces.” 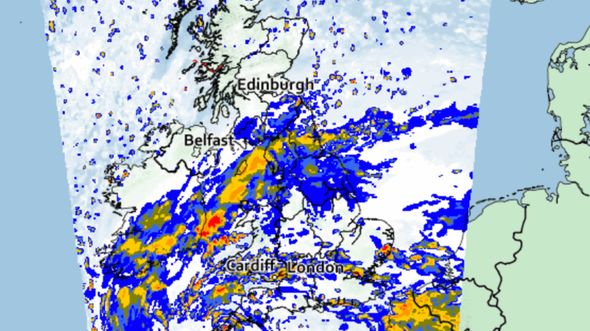 Conditions are set to become more settled on Thursday, with brighter spells across southern and central areas after a frosty start.

Christmas Day will be mostly fine, with a crisp start before the weather turns rainy again ahead of the weekend.

The Met Office’s short-term forecast for the end of the week said: “Mostly fine, sunny and cold on Christmas Day.

“Turning very unsettled over the weekend with strong winds and heavy rainfall, later wintry showers arrive from the northwest.” 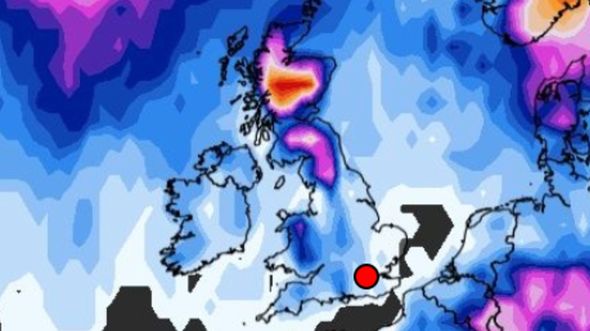 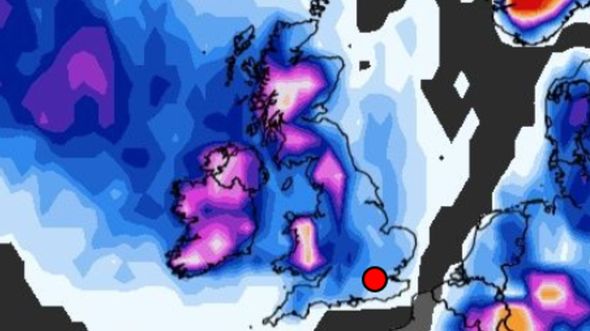 Long-range forecasts have predicted a weather system bringing wintry conditions and cold air into the UK for a period of over two weeks starting from December 25.

In January however, there is some expectation for heavy snow, with up to 35in (89cm) of snow forecast to cover Scotland from the start of the month.

Netweather forecaster Nick Finnis said cold air pushing down from Iceland could strike the UK as early as Boxing Day.

He said: “Boxing Day turning wet and windy from the northwest, as fairly deep area of low pressure moves southeast from Iceland towards the North Sea, hill snow developing across Scotland as colder air filters in here from the north, with some significant snowfall possible for the Highlands.

“Sunday will likely see low pressure centred over the North Sea, bringing sunshine and showers – which will be wintry in nature, with snow over hills, showers mostly towards coasts but some getting inland.