A snowstorm will blanket large parts of the UK tomorrow, with temperatures set to plunge to as low as -8C. The latest BBC weather forecast shows a freezing storm will bring ice and snow across much of the UK throughout Monday morning and afternoon . This comes after Storm Bella sparked torrential rain and fierce winds across southern England and western Wales this weekend.

BBC meteorologist Alina Jenkins said: “Storm Bella has been battering large swathes of the UK in the last 24 hours.

“We had wind gusts in excess of 80mph across the south of England and western Wales.

“The top speed recorded was 106mph at the Needles on the Isle of Wight. This was coupled with some torrential rain, courtesy of this very active cold front.

“That has now cleared away eastwards, and we are all in this area of much colder air, with plenty of showers feeding in from the west, many of them wintry.” 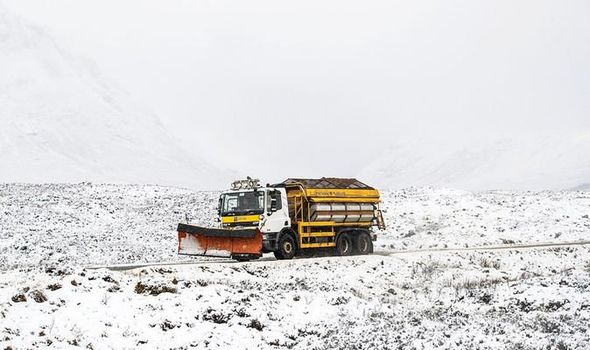 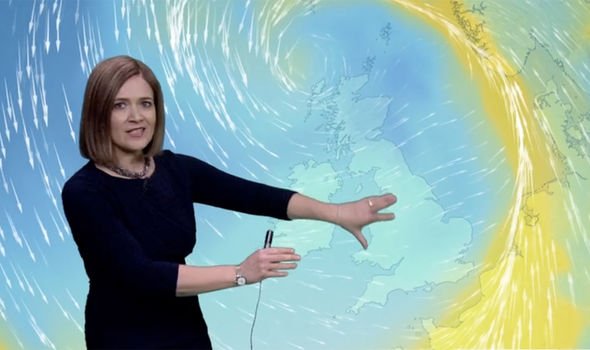 She told BBC viewers: “The amber wind warning has expired now, but there are still plenty of flood warnings that remain in place.

“We have snow and ice warnings in place as well.

“The showers tonight will continue to turn wintry across Scotland, but almost anywhere could see some sleet or snow.

“It is certainly feeling very cold as we are exposed to that brisk wind.

“As we head overnight and into Monday, a more persistent area of snow will develop across parts of Scotland before sinking its way southwards. 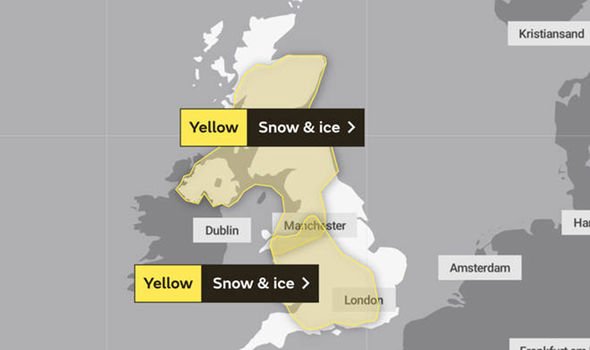 “We could see some sleet and snow move into northern England, the Midlands, maybe central and southern England after we move through the early hours.

“There is potential for freezing fog across southern half, with many parts of the UK waking up to below freezing temperatures on Monday.

“Temperatures could be as low as -6C to -8C in the glens of Scotland.”

Ms Jenkins added that the Chilterns and the Cotswolds could experience “significant snowfall” tomorrow. 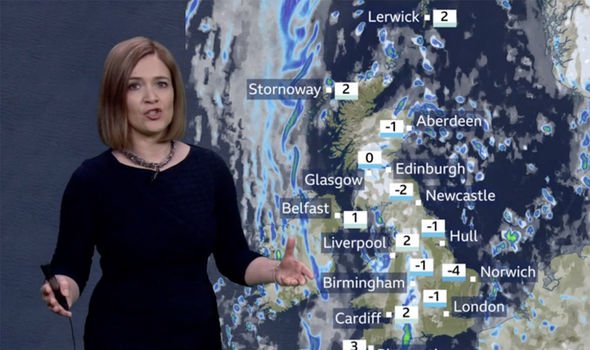 The Met Office also warned that “rain may turn to snow, which along with widespread ice, will lead to the potential for some disruption to travel and utilities”.

They have put in place a yellow weather warning for snow and ice across most of Scotland and parts of northern England and north Wales.

Scotland could see up to 10cm of snow by Monday morning on higher ground, and up to 3cm at lower levels, according to the forecast.

There are more than 300 flood warnings still in place across England following Storm Bella, with more than a hundred of these warnings an “immediate action” warning.

Popular Playland ride ‘The Beast’ back up and running after malfunction

How officers came knocking at the door of a devout Catholic