BBC Weather: Rain to hit some western parts of UK

BBC weatherman Owain Wyn Evans forecasts a “not bad looking” weekend for many which will see a dividing weather front bring misery to the west and decent weather for the east. Owain Wyn Evans added the moving weather front would then flip over this weekend, essentially dividing the UK, with those in the west enjoying sunny spells while those in the east suffering with cloud and scattered showers. Mr Wyn Evans also revealed the weather would be good news for gardeners as the rain and warm weather would be a boon for plant growth.

Mr Wyn Evans told BBC Breakfast: “For many of us, it’s not a bad looking weekend.

“We’ve got some sunny spells on the way but unfortunately what I can’t promise is wall to wall sunshine and gorgeous blue skies for everyone.

“Not a bad start to the day for many of us with [Saturday’s] weather headline is that it will be dry for most of us and we will see sunny spells.”

Mr Wyn Evans then pointed out an eastern weather front was moving in bringing cloud for the majority of the UK and rain for eastern parts like Wales and Northern Ireland. 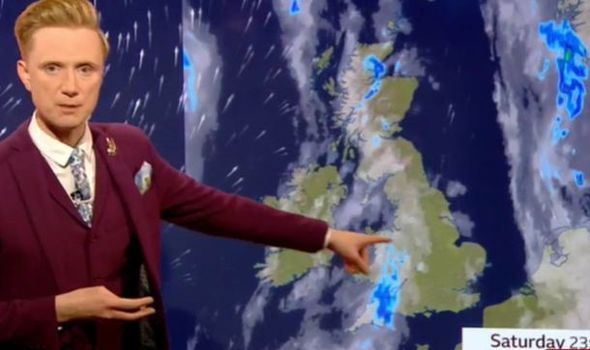 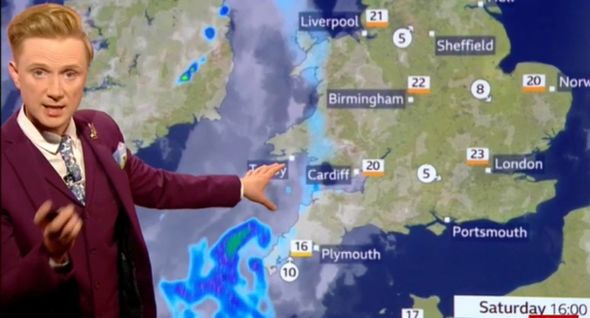 He continued: “This feature brought some pretty heavy downpours and some miserable conditions yesterday across some southeastern parts of England.

“And we do have some mist and fog patches from the southeast up towards North Yorkshire as we head through this morning.

“Then you can see it brightens up across much of the country but it is [better] in the west. 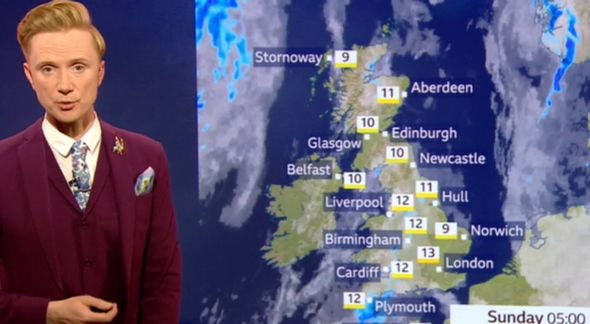 “It will move towards the east as we head through the day.”

Mr Wyn Evans added: “I think as we head into [Saturday] morning and into this afternoon across Northern Ireland, some of those showers becoming heavier.

“This is still that weather front I mentioned, reaching up towards northern parts of Scotland but it’s a bit of a divider really because to the east of that it’s not a bad looking day as we’ll see some sunshine.

“But then to the west, it’s cloudy and pretty miserable across southwestern parts. 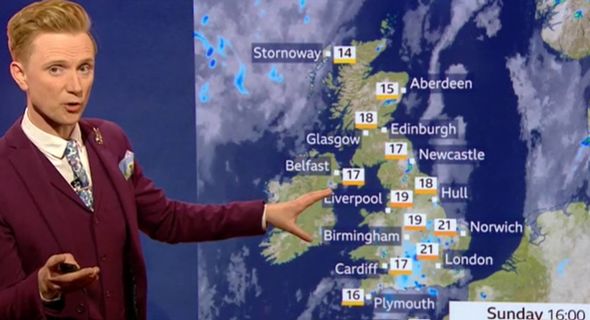 “As we head through towards [Sunday] morning first thing, lows tonight between nine and 13C.

“A cloudier start to the day tomorrow in prospect but whereas [Saturday] saw those western parts have seen the cloud the rain, really West is best [on Sunday] as far as the sunshine goes.

“Temperature-wise, getting to about 21C I think but sunny spells as you can see Northern Ireland northern parts of England, through Scotland – watch out for some showers though.

“Whereas I think some central and southeastern parts will see cloudy conditions and some showers.

“Now, looking towards Monday, we still have this weather front and it really wants to hang on in there.

“It will introduce cloud, introduce showers and off to the west we have yet another weather front which wants to move in.

“So I think then on Monday we’ll see further showers, some bright spells developing as we head through the day and really over the coming days.”

Mr Wyn Evans quipped the weather conditions would be perfect for gardeners who have seen rain followed by sunny spells.