Beach hut that is just 10ft by 16ft goes up for sale for £450,000 on exclusive Dorset sandbank – the price of a five-bed house in North Yorkshire

Britain’s beach hut boom continues after a wooden cabin went up for sale for £450,000 – the same price as a five bed house in some areas of the country.

The 10ft by 16ft hut – that doesn’t even face the sea – is on the exclusive Mudeford sandbank in Christchurch Harbour, Dorset.

The timber hut was only built three years ago but still has no mains electricity or washing facilities, although it does have a chemical toilet.

It can sleep up to seven people and has a kitchen area, with a cooker connected to a Calor gas bottle and fridge powered by roof-top solar panels.

It has a mezzanine floor space for sleeping, double glazed doors and windows and a decked terrace offering sunset views of the harbour.

The new owners will have to share a communal shower block with other like-minded hutters. 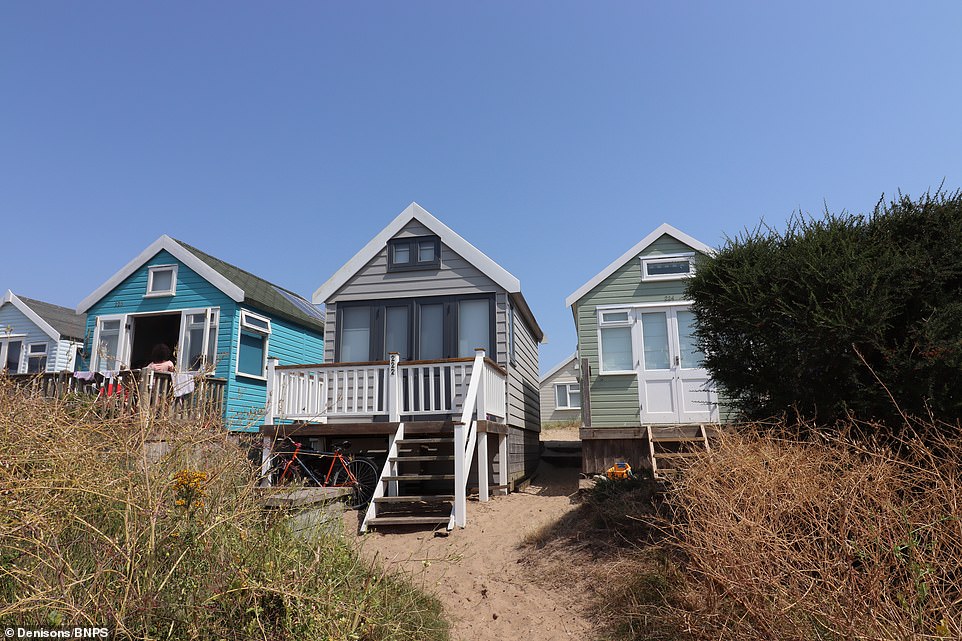 The hut (centre) – that doesn’t even face the sea – is on the exclusive Mudeford sandbanks in Christchurch Harbour, Dorset 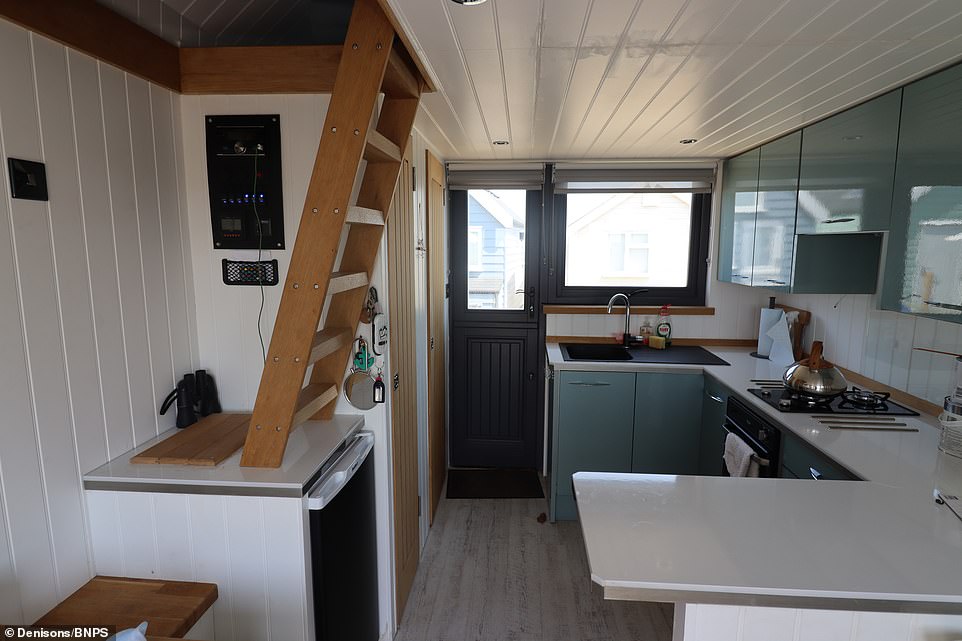 Pictured: The interior living space of the beach hut, which went up for sale for £450,000, located in Christchurch, Dorset 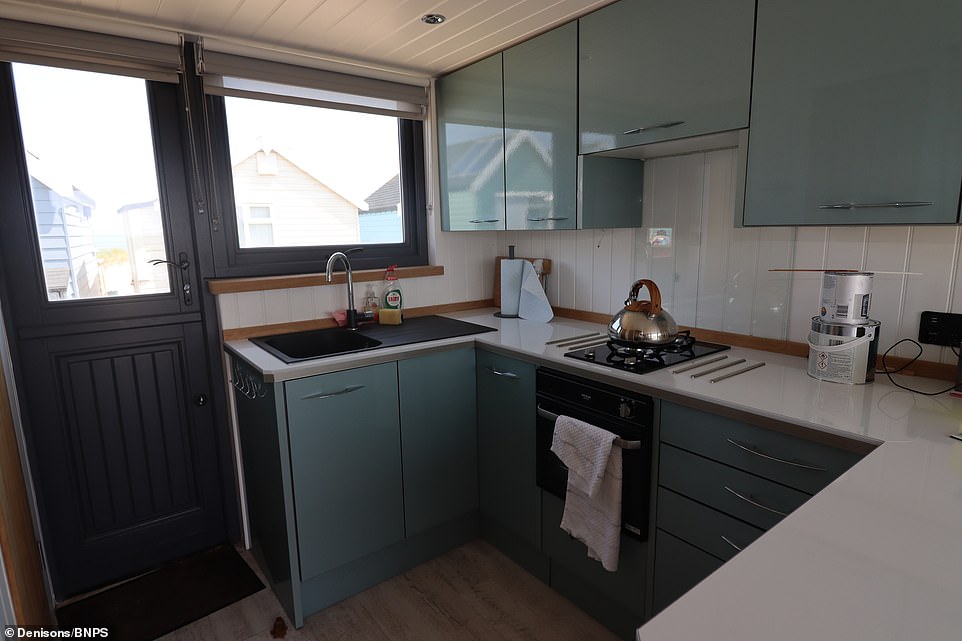 The kitchen area, which comes with a cooker connected to a Calor gas bottle and fridge powered by roof-top solar panels 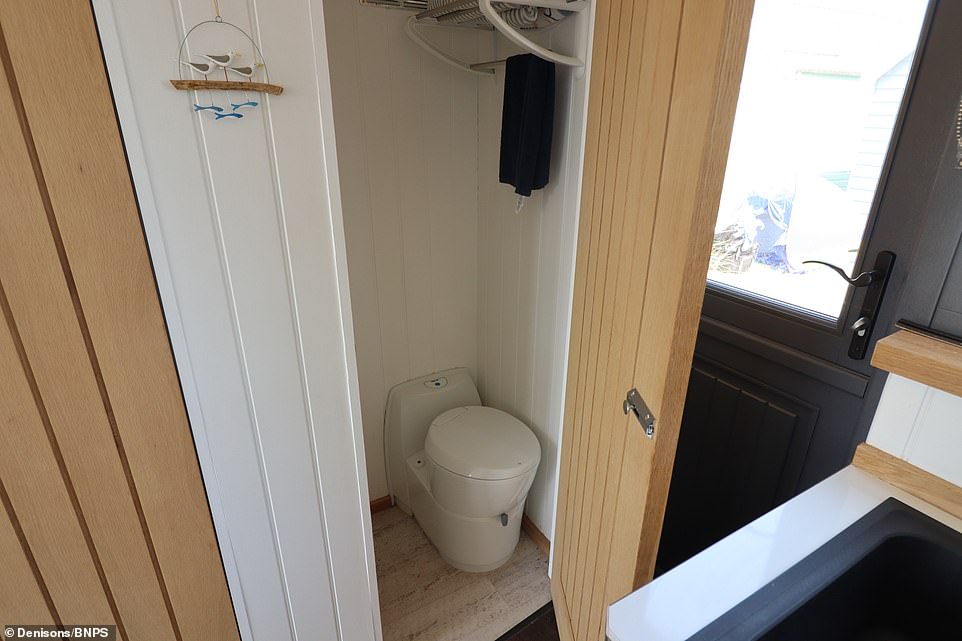 It has been owned by a family but they have now put it up for sale because they aren’t using it. Pictured: the beach hut’s toilet

Mudeford is known for being home to the most expensive beach huts in the country.

Last year, in the midst of a fierce, post-covid market, one is rumoured to have broken all records by privately changing hands for over £500,000.

The main appeal of Mudeford is its remote location.

Cars are not allowed there and it is only reachable by a 20 minute walk, a ride on a novelty land train or a short ferry crossing.

Hut 222 is closer to the Hengistbury Head end of the sandy spit and faces Christchurch Harbour.

It has been owned by a local family for the past four years but they have now put it up for sale because they aren’t getting enough use out of it. 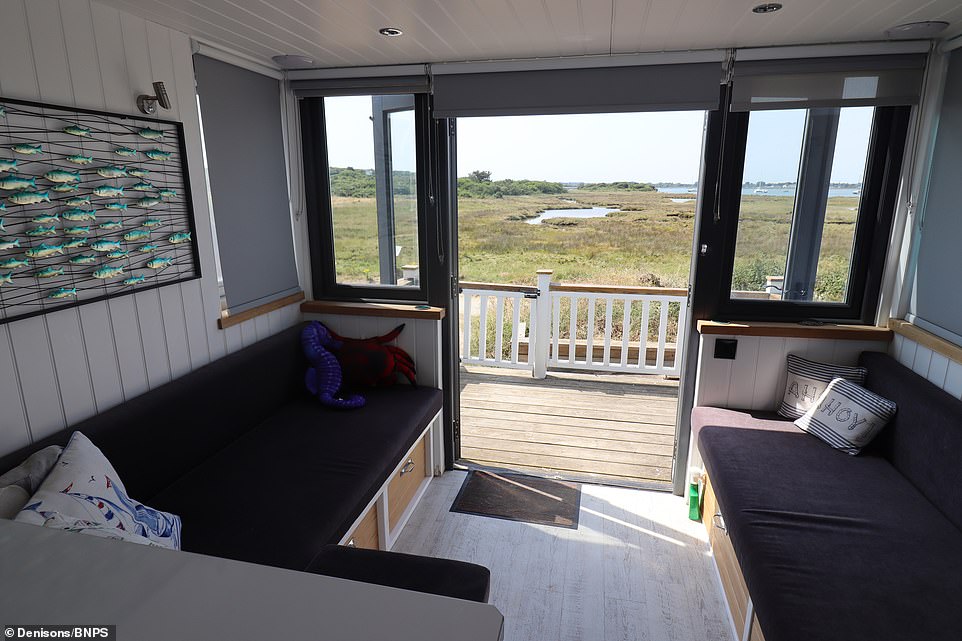 Pictured above: As well as a spacious seating area, the wooden beach hut also features a decked terraced to the front 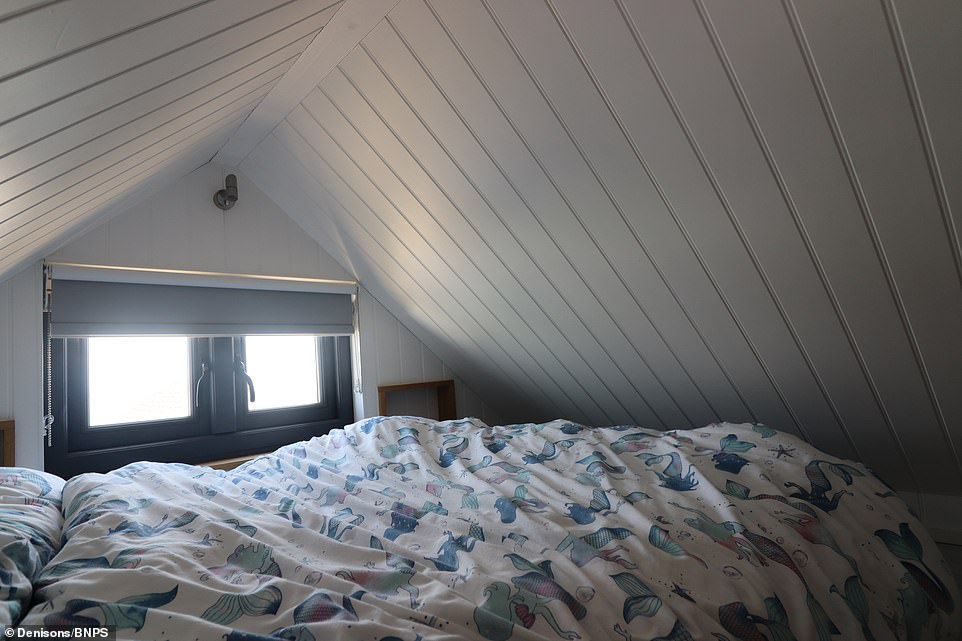 Pictured: The first floor bedroom which features two double beds, allowing the beach hut to sleep up to seven people at once 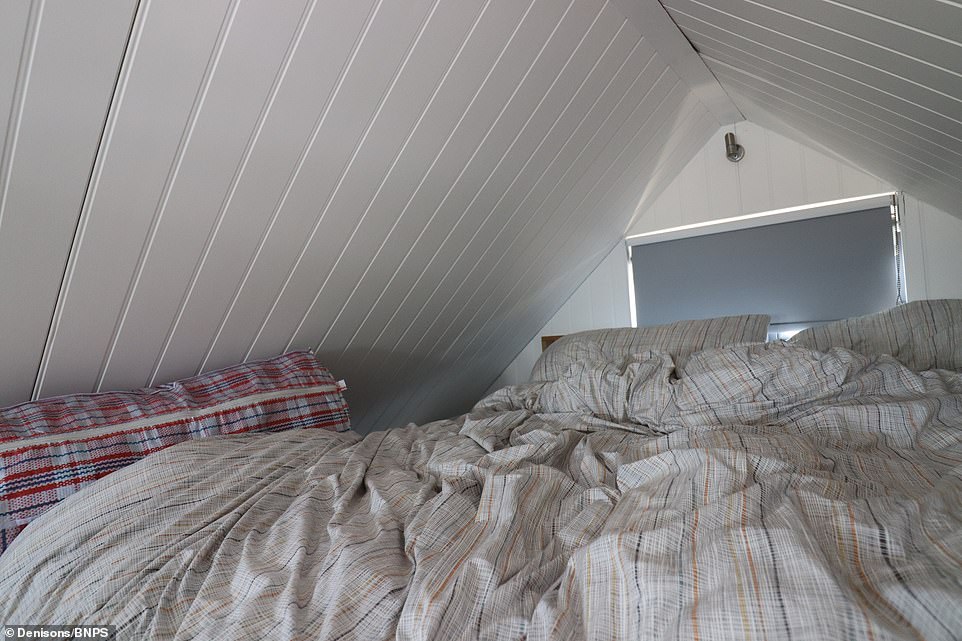 Pictured: The first floor bedroom which features two double beds, allowing the beach hut to sleep up to seven people at once

For the same price it is possible to buy a five bedroom detached house in North Yorkshire.

Andrew Denison, of estate agents Denisons, said while the market for beach huts has settled down from last year, demand remains strong.

He said: ‘We have a healthy list of people wanting to buy a hut at Mudeford and that is why we have priced it at offers over £425,000.

‘If two or three people come in for it then we will discuss and decide with the owners which offer to take but I could see a bit of an auction happening and it selling for £450,000 or £460,000.

‘Last year we experienced a fierce market for beach huts. 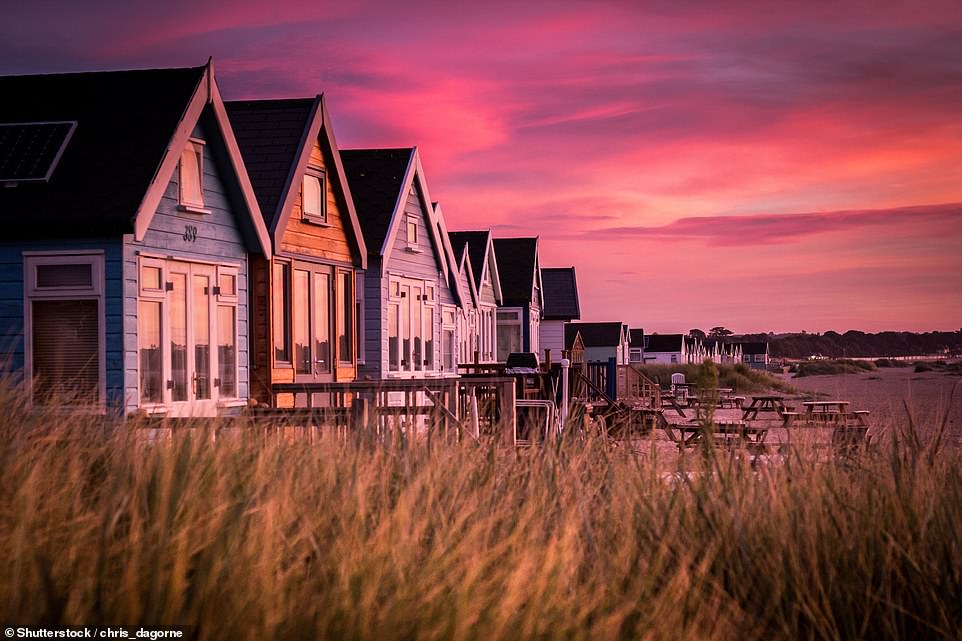 Desirable location: Hut 222 is closer to the Hengistbury Head (pictured) end of the sandy spit and faces Christchurch Harbour 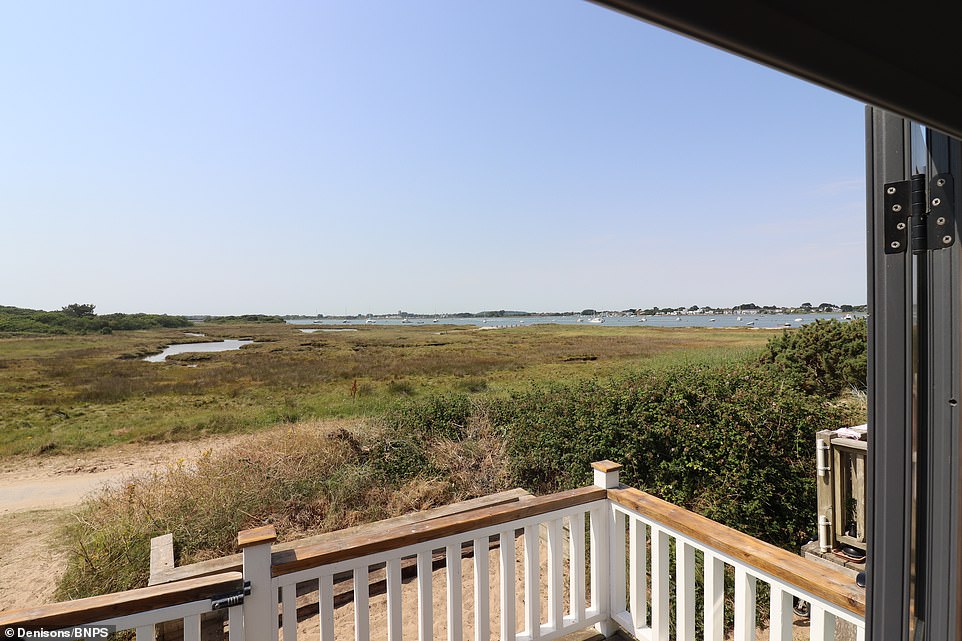 Pictured above: The beach hut’s decked terrace looks out onto Christchurch Harbour with it’s back to the sea 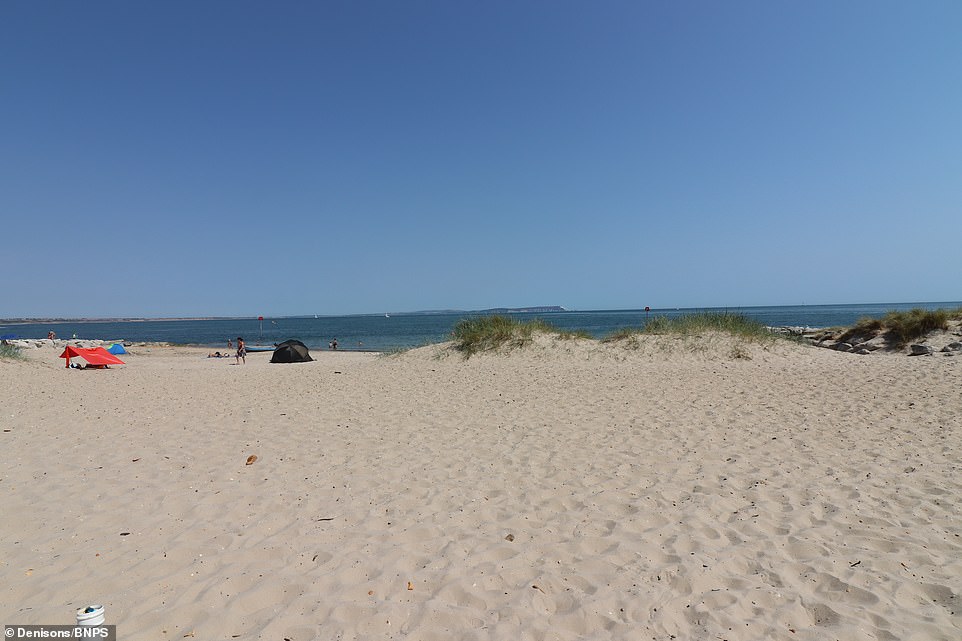 Although the hut doesn’t face the sea, it is a stone’s throw away from this seafront in Christchurch, which is located behind it 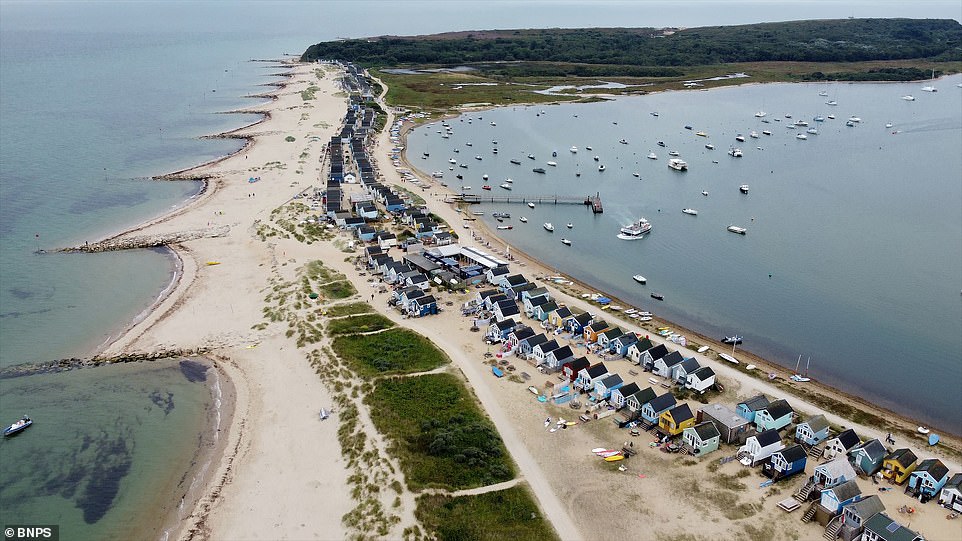 Pictured above: The beach huts at Mudeford sandbank are in a highly desirable location especially if they face the sea

‘I think it was a consequence of covid. There was a lot of pent up demand from where people couldn’t get out and buy during covid and after things opened up again a lot of people changed their lifestyles and decided they wanted to be by the sea and just went for it.’

There are about 360 huts on the Mudeford sandbank and the prices for them have rapidly increased over the past 20 years.

In 2002 the humble huts were selling for £70,000. The following year one broke the six-figure mark for the first time.

As well as paying out the asking price, the new owners will also have to stump up about £4,500 a year to the local council in fees.