Exiled Belarus opposition leader Sviatlana Tsikhanouskaya vowed to continue her campaign against authoritarian ruler Alexander Lukashenko after a court in the country jailed her husband for 18 years.

“The dictator publicly takes revenge on his strongest opponents,” Tsikhanouskaya said on Twitter on Tuesday, following the conviction of Siarhei Tskihanouski at a closed trial in a Belarus prison. “We won’t stop.” 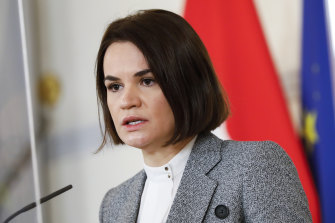 Belarusian opposition leader Sviatlana Tsikhanouskaya, whose husband was jailed, said she would continue her campaign against authoritarian ruler Alexander Lukashenko.Credit:AP

The popular YouTube blogger was convicted of organising mass unrest, public order violations, stirring “social enmity” and obstructing the central election commission. His arrest in May last year after he announced plans to challenge Lukashenko in presidential elections prompted Tsikhanouskaya to run in his place.

A political novice, she quickly garnered strong support amid widespread public discontent with the long-serving president, whose claim to have won 80 per cent in the August 2020 elections triggered an unprecedented wave of protests.

Tskihanouskaya fled Belarus the day after the vote following threats from officials. She has gained US and European backing for her campaign to hold fresh elections, meeting US President Joe Biden and other world leaders who’ve refused to recognise Lukashenko’s victory and imposed sanctions on his regime.

German Foreign Minister Annalena Baerbock called the verdict “really incredible,” and demanded the immediate and unconditional release of Tsikhanouski and all political prisoners by Belarus.

“They disgrace the rule of law and the international obligations of Belarus by this court ruling,” she told reporters during a visit to Stockholm in Sweden.

Five other people on trial with Tsikhanouski, including Radio Free Europe/Radio Liberty consultant Ihar Losik, were also jailed for 14 to 16 years.

The Belarusian human rights centre Viasna, itself a target of the government’s crackdown, also on Tuesday expanded its list of the country’s political prisoners to 920 people.

British armed forces to be deployed to Baltic Sea for exercises