The woman trying to bring down ‘Europe’s last dictator’ is a 37-year-old English teacher described as an ‘accidental Joan of Arc’ who ran for the presidency of Belarus after her husband was arrested and barred from the ballot in May.

Svetlana Tikhanovskaya’s unlikely rise to political stardom has posed the most serious challenge to strongman leader Alexander Lukashenko in his 26 years in power.

After entering the race and moving her two children abroad for their own safety, she told supporters that ‘I don’t want power… I want to get my children and husband [back] and I want to keep frying my cutlets.’

But she now says she is willing to take power if Lukashenko is toppled by the mass protests which have engulfed the ex-Soviet nation since both candidates claimed victory in the disputed August 9 election. 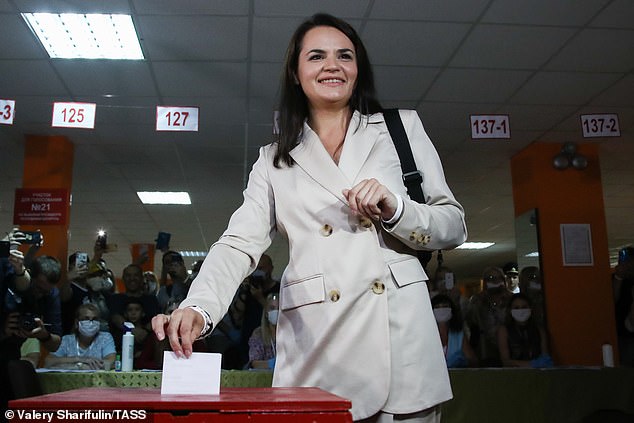 Svetlana Tikhanovskaya casts her vote in the Belarus presidential election last week, following an unlikely rise to political stardom after her husband was arrested and jailed 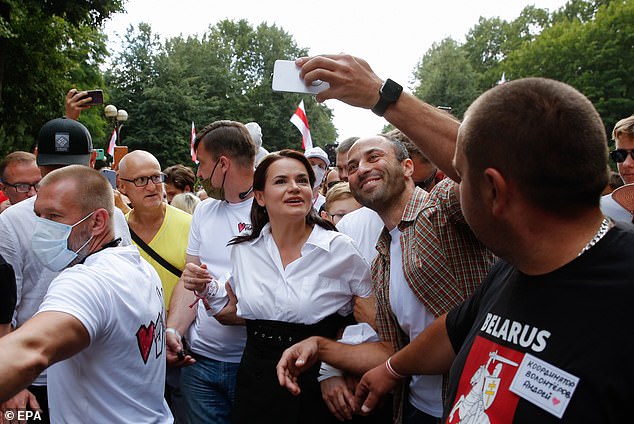 Tikhanovskaya poses for a selfie with a supporter during a campaign rally in Baranovichi, a week before the disputed presidential election in Belarus 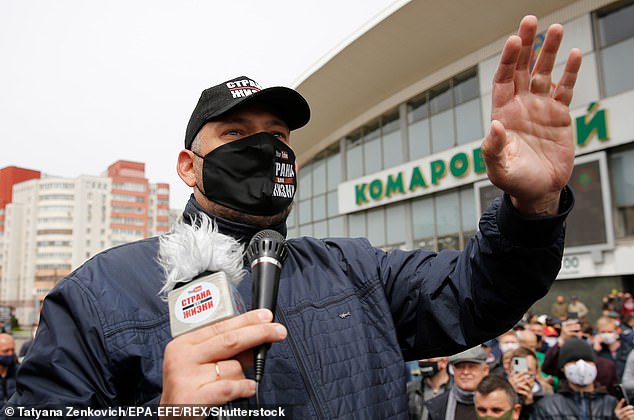 Svetlana ran for the presidency after her husband, 41-year-old blogger Sergei Tikhanovsky (pictured at a rally in May), was arrested and barred from the ballot

Tikhanovskaya was born in 1982 in Mikashevichi, a small town south of Minsk in what was then the Soviet Union.

As a youngster she spent several summers in the Republic of Ireland under a charity scheme to help children who lived near the site of the 1986 Chernobyl disaster.

The explosion took place in northern Ukraine and the contamination spread into Belarus, affecting thousands of people.

After the fall of Communism, Tikhanovskaya studied to become an English and German teacher in the historic city of Mozyr in the south of Belarus.

While in Mozyr, she met her future husband Sergey who owned a nightclub in the city.

After working as an English teacher and translator, she stepped back from her career to look after the couple’s two young children, now aged five and 10.

Henry Deane, one of the volunteers who looked after Svetlana in Ireland, said she had given up work to help her son who has severe hearing problems.

‘She moved the family to Minsk so that he could have the implant operation he needed,’ Mr Deane told the Guardian.

‘She poured her life into looking after her son and daughter. She is a devoted mother.’

Sergey, now 41, is a prominent blogger in Belarus who hoped to run for president when Lukashenko sought a sixth term in this year’s election.

But he was arrested and jailed in May on what Tikhanovskaya says were trumped-up charges of assaulting a police officer.

Amnesty International said the arrest appeared to be ‘politically motivated’ and said Tikhanovsky had tried to avoid a scuffle with police despite being provoked.

Authorities said they had opened a criminal case against Tikhanovsky for ‘obstructing elections’, using what Amnesty described as ‘vague language’.

Police claimed they also found an unexplained $900,000 hidden in the couple’s sofa, which Tikhanovskaya said she knew nothing about. 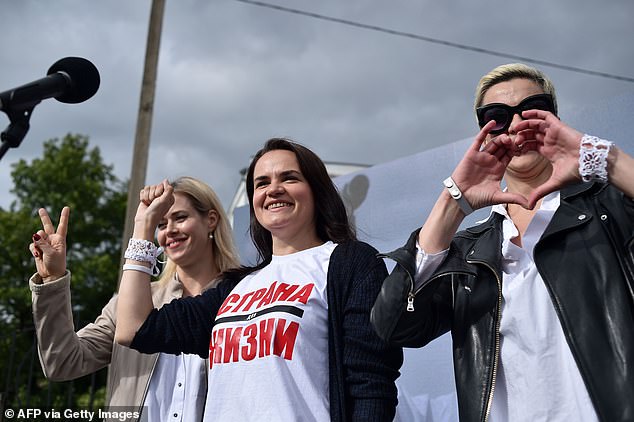 ‘Charlie’s Angels’: Tikhanovskaya (centre) has been flanked at rallies by Veronika Tsepkalo (left) whose husband was also barred from running, and Maria Kolesnikova (right), the campaign manager of another jailed opposition figure 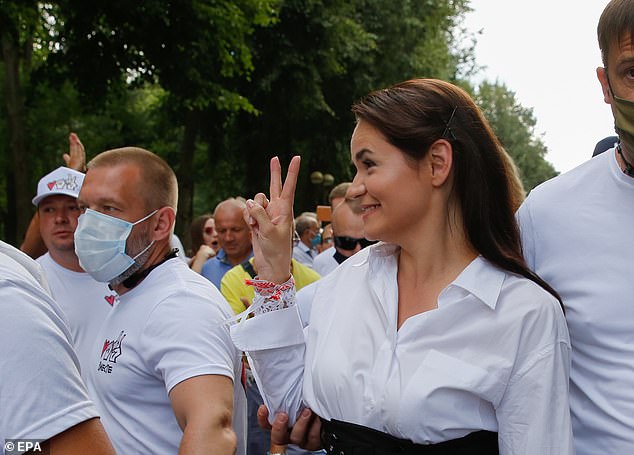 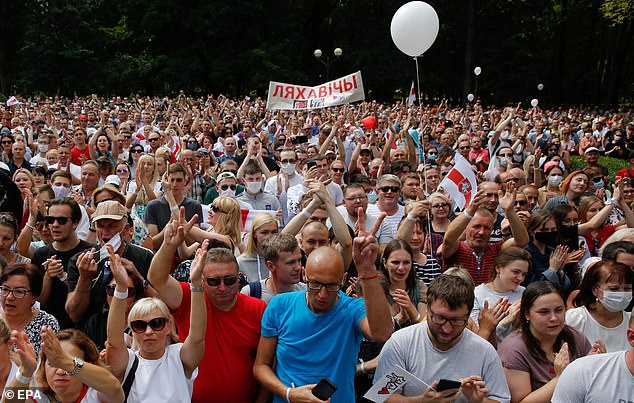 The arrest prevented Sergey Tikhanovsky from submitting his candidacy in time, ruling him out of the presidential race.

However, Belarus’s electoral commission allowed Svetlana Tikhanovskaya to stand in his place.

‘I love my husband very much so I am continuing what he started,’ she said. ‘I love Belarusians and I want to give them an opportunity to have a choice.’

Lukashenko openly sneered at the idea of a female opponent, saying that the strains of the presidency would cause her to ‘collapse, poor thing’.

But despite her lack of political experience, Tikhanovskaya’s campaign rallies have drawn some of the biggest crowds in Belarus since the fall of the USSR.

In speeches, Tikhanovskaya calls herself an ‘ordinary woman, a mother and wife’ and rallies her crowds with calls for change.

‘I have become the embodiment of people’s hope, their longing for change,’ she said – adding that she and her family had received threats during the campaign.

Her husband has been accused of plotting mass unrest and collaborating with Russian mercenaries, claims which Tikhanovskaya has called ‘very scary.’

Their two children were taken abroad for their own safety, and Tikhanovskaya herself is now in Lithuania.

During the campaign she spoke of the difficulty of being separated from her children, including her hearing-impaired son.

Her presidential campaign has also come under pressure from authorities, with campaign manager Maria Moroz arrested twice in the space of a week.

Tikhanovskaya says that she lacks the ‘massive charisma’ of her husband, who has travelled around Belarus interviewing ordinary people for hard-hitting videos.

She has sometimes struggled to articulate her political views, acknowledging she was not a politician but a ‘symbol’ of change.

However, Tikhanovskaya’s simple but direct speeches have prompted lengthy cheers at crowded rallies. 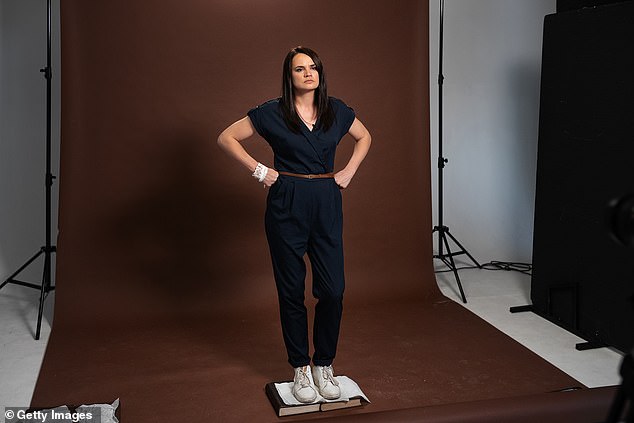 Tikhanovskaya, pictured recording a campaign video on August 6, has won huge support at rallies with her simple but direct speeches 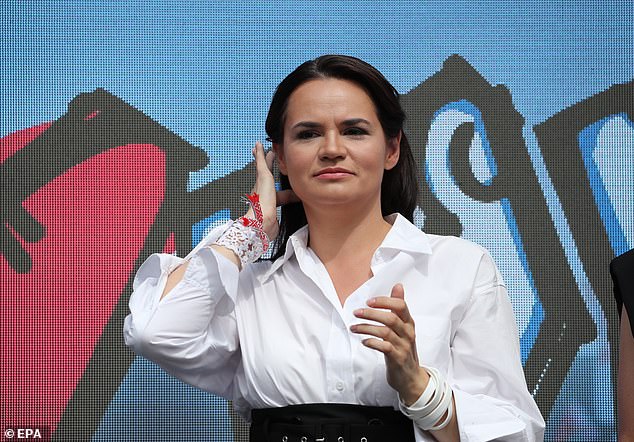 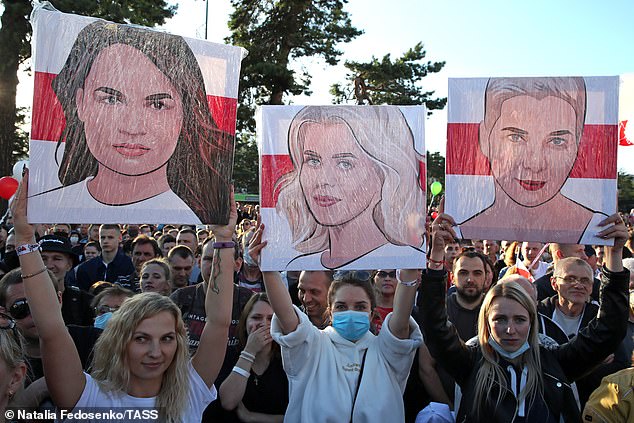 Allocated live slots on state television, she listed alleged lies by Lukashenko’s regime, repeating: ‘They won’t show you this on television’.

She has accused Lukashenko of showing blatant disregard for the people during the coronavirus epidemic, which the president has dismissed as a hoax.

The Village, a Minsk-based news site, called her ‘an accidental Joan of Arc,’ invoking the French peasant who helped achieve a pivotal military victory against the English in the 15th century.

Tikhanovskaya has also been helped by two women with more political experience: Veronika Tsepkalo, whose ex-diplomat husband Valery Tsepkalo was barred from standing, and Maria Kolesnikova, campaign chief of ex-banker Viktor Babaryko who was also dropped from the polls and is in jail.

The two women have flanked Tikhanovskaya at campaign rallies, earning them the nickname of ‘Charlie’s Angels.’

Tikhanovskaya has started wearing her hair down and swapped severe dark clothing for pastels colours.

After Lukashenko claimed a disputed victory last week, Tikhanovskaya indicated she had left Belarus to be with her children.

‘Children are the most important thing we have in life,’ said the 37-year-old after leaving for Lithuania.

However, she has continued to rally her supporters and said today she was willing to assume the presidency if Lukashenko was forced out.

Tikhanovskaya urged security and law enforcement officers to switch sides – saying they would be forgiven if they abandoned Lukashenko now.

‘I did not want to be a politician,’ she said. But fate decreed that I’d find myself on the frontline of a confrontation against arbitrary rule and injustice.’