Washington: US President Joe Biden is preparing to announce a plan to share 500 million COVID-19 vaccines manufactured by Pfizer with other countries, a move the US hopes will be a turning point in the global battle against the coronavirus.

Biden is expected to officially announce the plan to share vaccines with around 100 countries as early as Friday (AEST) during a trip to the United Kingdom for the G7 summit. 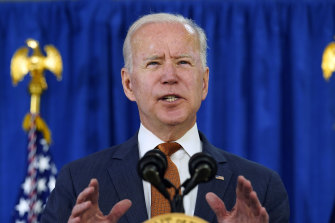 US President Joe Biden is expected to announce the major vaccine sharing initiative during his trip to the United Kingdom for the G7 summit.Credit:AP

The visit, to be followed by a visit to NATO headquarters in Brussels and a summit with Russian President Vladimir Putin in Geneva, will be Biden ’s first overseas trip since entering the White House in January.

The proposal represents a major step up from Biden’s previous pledge to share 80 million vaccines with other countries by the end of the month.

It is expected that 200 million doses will be distributed this year with 300 million to follow next year.

As well as preventing severe illness and death around the globe, the distribution of hundreds of millions of US-manufactured Pfizer doses would allow the US to pull ahead of China in the “vaccine diplomacy” contest between the rival superpowers.

Biden has consistently said he wants to show the world that democracies such as the US and its allies are still capable of solving major global challenges.

The Pfizer vaccine is globally regarded as one of, if not the most, effective and desirable vaccines against COVID-19 available.

The Washington Post first reported details of the plan, which have been confirmed by multiple media outlets.

The Biden administration has been coming under increased criticism about its slowness in developing a global vaccine sharing plan given the dramatic drop-off in demand for vaccines in the US over recent months.

Biden said last month that he hoped to announce details of a major multinational initiative to distribute vaccines globally at the G7 summit.

“There’s a lot of talk about Russia and China influencing the world with vaccines,” he said.

“We want to lead the world with our values, with this demonstration of our innovation and ingenuity and the fundamental decency of the American people.”

He added: “This is a rapidly changing world and it’s a mistake to bet against democracies.”

Biden and other administration officials have repeatedly stressed that they will not expect anything in return from the countries that receive the vaccines.