PRESIDENT Biden and Vladimir Putin are set to have another phone call on Thursday – their second conversation this month.

The presidents will discuss a range of topics, "including upcoming diplomatic engagements with Russia," National Security Council spokesperson Emily Horne said on Wednesday. 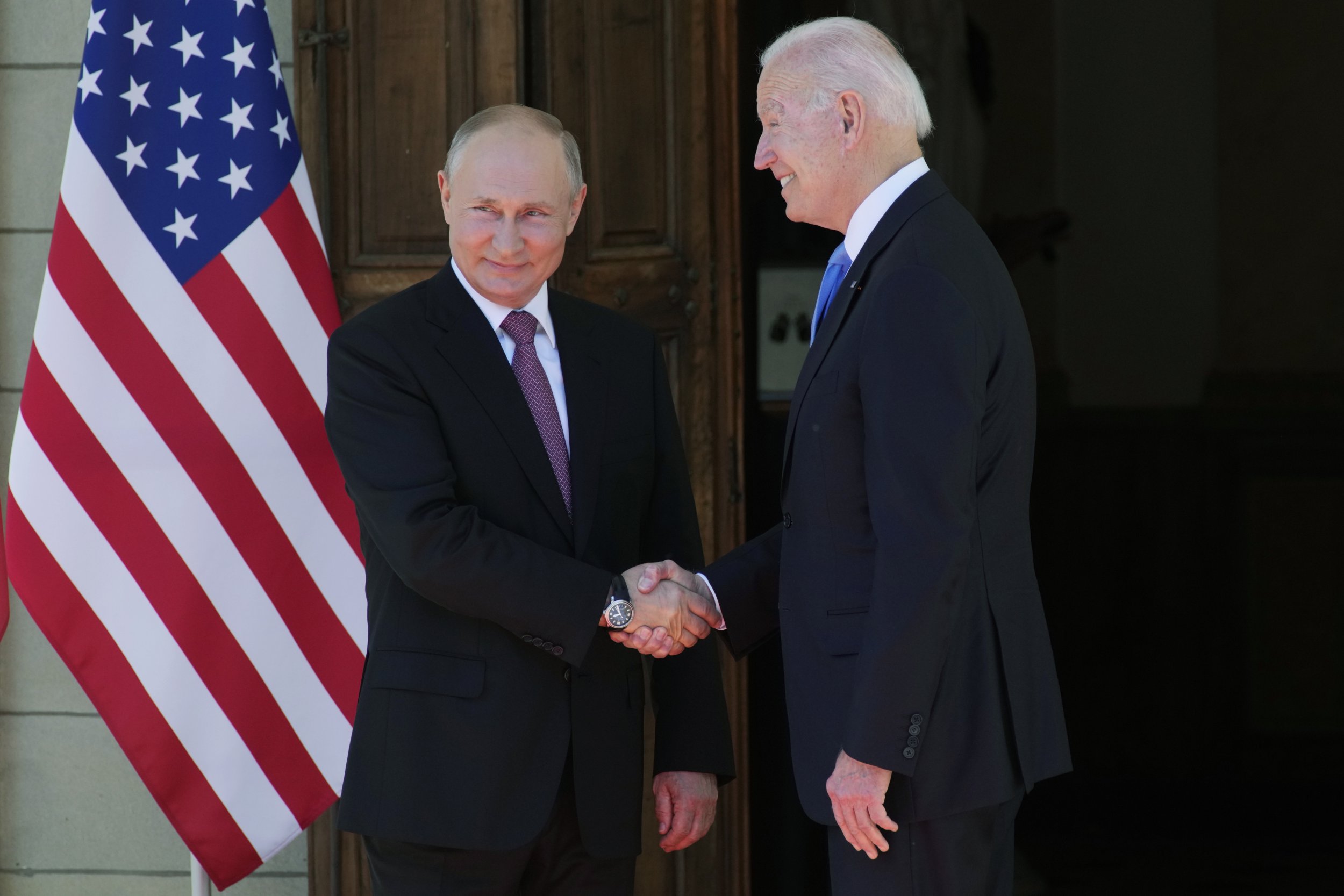 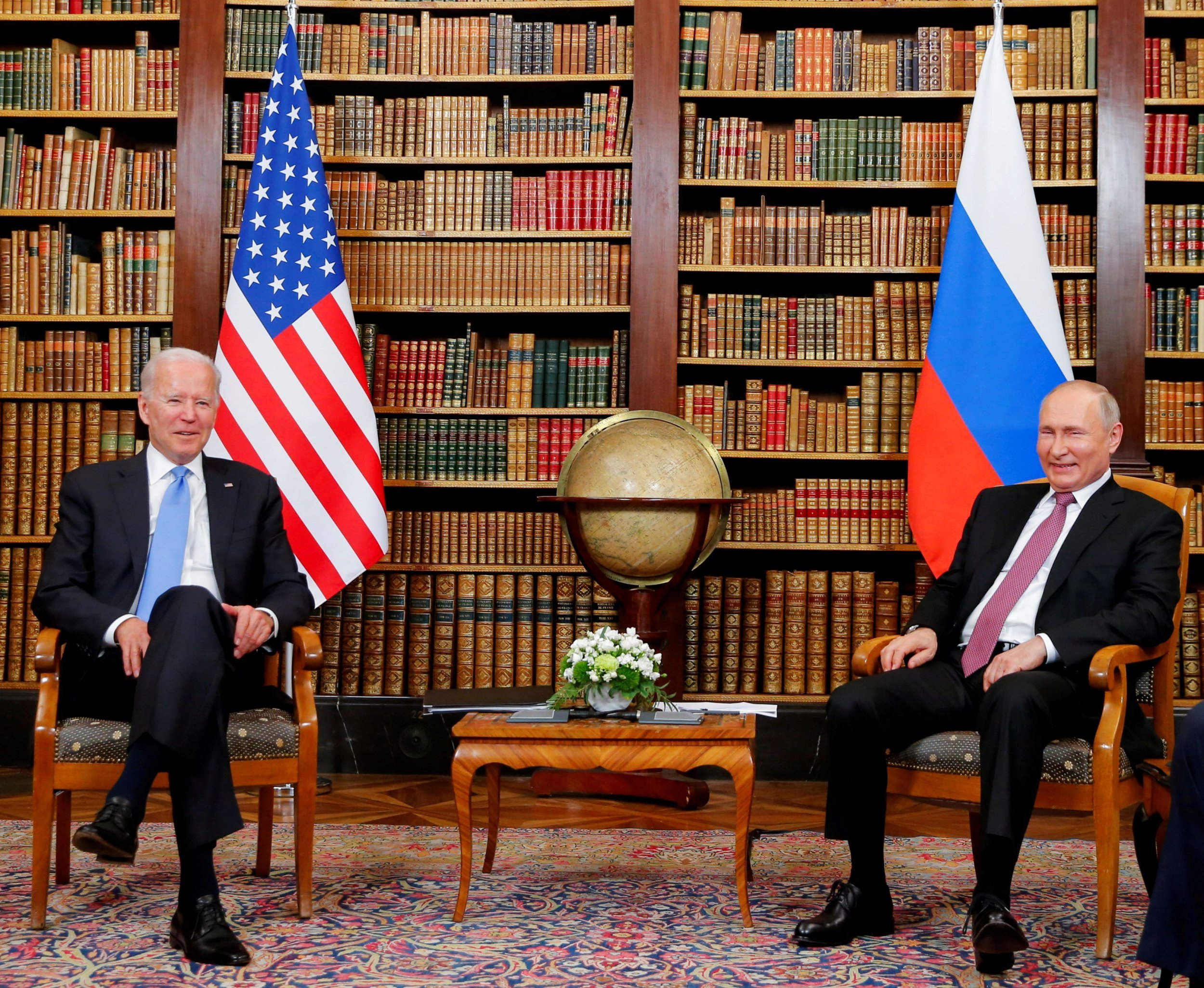 "The Biden Administration continues to engage in extensive diplomacy with our European Allies and partners, consulting and coordinating on a common approach in response to Russia's military build-up on the border with Ukraine."

The call was initially requested by Putin, an official claimed, but was accepted by Biden as "he believes when it comes to Russia there is no substitute for direct leader-leader dialogue."

The call is scheduled for 3.30pm ET on Thursday afternoon.

This is the second time this month that the pair will discuss the country's relations.

On December 7, Biden was seen waving at Vladimir Putin and forgot to turn on his mic during the high stakes call as the threat of a Russian invasion of Ukraine looms.

The two-hour meeting between the two leaders comes after Moscow ramped up its wargames in recent weeks, sparking fears of a destabilizing conflict in Eastern Europe.

Russian news agencies released a video of the first few minutes of the call.

Putin took the call from his residence in Sochi, the Russian resort city on the Black Sea.

Putin was seated at a long wooden desk, with Biden on a large video screen in front of him, waving at each other as the call began.

“I welcome you, Mr. President!” Putin said at the start of the call, according to a brief video of the opening moments.

Biden experienced some technical difficulties on the call, apparently forgetting to switch his microphone on.

There was a silence on the other end, and then Biden is seen leaning forward, flipping a button and saying, "There you go," with a smile.

“I uh, unfortunately, last time I — we didn’t get to see each other at the G20. I hope next time we meet we do it in person,” Biden said.

According to the White House, the two began their conversation via video-link at 10.07am, and ended at 12.08pm. 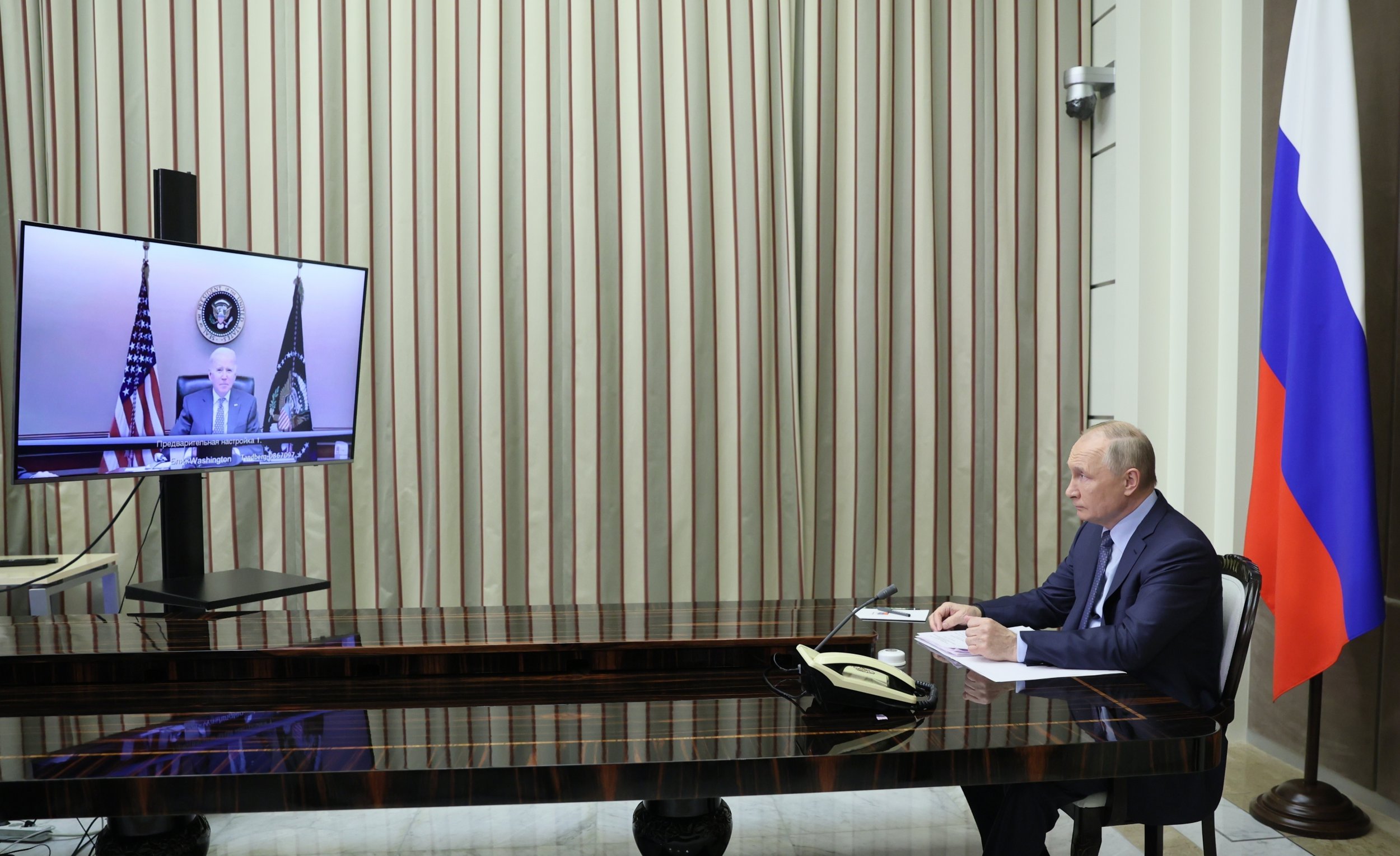 Per CNN, a White House statement on the call said Biden "voiced the deep concerns of the United States and our European Allies about Russia's escalation of forces surrounding Ukraine and made clear that the US and our Allies would respond with strong economic and other measures in the event of military escalation."

Biden also reportedly "reiterated his support for Ukraine's sovereignty and territorial integrity and called for de-escalation and a return to diplomacy," the White House said.

Moscow has denied that it plans to attack Ukraine.

The two presidents tasked their respective teams with following up on their discussions, with the White House adding that "the US will do so in close coordination with allies and partners."

In addition to the Ukraine issue, the two leaders discussed "the US-Russia dialogue on Strategic Stability, a separate dialogue on ransomware, as well as joint work on regional issues such as Iran," the White House said.

“There was no finger-wagging, but the president was crystal clear about where the United States stands on all of these issues,” Sullivan said.

Sullivan wouldn’t elaborate on what “strong economic measures“ the White House would be willing to take against Russia, but when asked how potential economic sanctions might deter Russia when they didn’t put a stop to the 2014 annexation of Crimea, the national security adviser said Biden’s White House was prepared to take different actions.

The president also made no commitments or concessions on NATO regarding a reduced US presence or Ukraine’s membership, Sullivan said.

Ahead of their meeting, Kremlin officials told reporters it expects no breakthrough at virtual talks between Biden and Putin.

Kremlin spokesman Dmitry Peskov told reporters that Moscow regretted the White House's predictable tendency to resort to sanctions but said that Putin was ready to hear Biden's concerns and that the Kremlin leader wanted to set out his own.

"There's no need to expect any breakthroughs from this conversation. It is a working conversation at a very difficult period," Peskov said.

"The escalation of tensions in Europe is off the scale, it is extraordinary, and this requires a personal discussion at the highest level," he added.

Ukrainian Defense Minister Oleksiy Reznikov told CNN that there would be a "really bloody massacre" if Russia decides to invade Ukraine and warned that "Russian guys also will come back in the coffins."

The defense minister also said that five million Ukrainian refugees are fleeing into Europe amid heightened alarm about troop movements on the nations' border.

Kyiv has accused Russia of deploying tanks and additional sniper teams near the Ukrainian border amid warnings Moscow could invade in weeks.

Satellite images have revealed huge new camps of Russian troops, tanks, and artillery along the border.

"If I can advise President Biden, I would like him to articulate to Mr. Putin that no red lines from the Kremlin side should be here. The red line is here in Ukraine and the civilized world will react without hesitation," Reznikov told CNN.

"The idea of not provoking Russia will not work," he added.

A day ahead of the US-Russia call, the Pentagon confirmed that it has continued to observe "added military capability" by Russian forces along the country's border with Ukraine.

US intelligence forces detected that Russia is massing around 175,000 troops on the border in preparation for a “massive offensive” as soon as early next year.

Isabel Sawkins, a research fellow at the Henry Jackson Society, exclusively told The Sun: “Vladimir Putin has seen this as an opportunity to either station more troops or conduct more hypersonic missile tests because he knows the West has been distracted.

“The US has been distracted with the Pacific region and the retreat from Afghanistan. The eastern border with Europe has not been a priority for the US recently.”

Officials in Moscow claimed to have successfully tested its high-speed Zircon hypersonic weapon, and state media reports that Russia has increased its military cooperation with China.

The two countries have conducted joint military drills and signed a pact outlining ambitions for closer military cooperation between 2021-25.

BIDEN 'WILL BE CLEAR'

On Monday. White House press secretary Jen Psaki said that Biden "will be clear — as we have conveyed publicly — that we have been preparing a range of economic sanctions or economic options that could have a detrimental impact on the Russian economy."

Per CNN, the US is reportedly exploring options for the potential evacuation of US nationals from Ukraine in case of a Russian invasion.

In recent days, US officials have weighed whether to issue wide-reaching sanctions on Russia meant to deter Putin from launching an invasion into Ukraine.

Russia has constructed supply lines, including medical units and fuel, that could sustain a drawn-out conflict should Moscow choose to invade, two sources familiar with the latest intelligence assessments told the outlet.

Biden was vice president, under then-President Barack Obama, in 2014 when Russian troops marched into the Black Sea peninsula of Crimea and annexed the territory from Ukraine.