Biden’s bizarre habit: President, 79, likes to carry cash on him so he can slip it to CHILDREand encourage them to buy ice cream, former bodyman claims

President Joe Biden has long been known to make personal connections at political events, and to grab an ice cream whenever he can on the road.

Now, a close aide has revealed Biden also tries to share his love of ice cream with the next generation at events – even carrying cash to give children ice cream money when they have to endure one of his political speeches.

‘I’ve seen him comfort people who were in tears talking about their personal hardships, console somebody who’s recently been diagnosed with cancer, honor a veteran service-member with a handshake and one of his challenge coins, and also give a young person money for ice cream just for sitting through the speech – and all in the same rope line,’ said Biden’s former ‘body man,’ Stephen Goepfert.

Goepfert followed steps behind Biden at hundreds of events during the campaign and in the White House before he left in August.

Biden savors moments after his events when he can connect with voters one at a time.

The president was seen with a wad of cash during a recent trip to a Los Angeles taqueria – although he left more than $20 behind asking a cashier to pay for the people behind him, rather than as a big tip, as DailyMail.com reported.

Finally unleashed from being fenced off from crowds due to COVID protections early in his term, Biden is back to taking selfies with strangers and photo lines with fans and fundraisers.

Like any good politician, he has taken an interest in kids. At the White House on Monday, he unexpectedly called up two children for a Diwali reception at the White House, after pointing out two lawmakers in the audience, Ro Khanna and Raja Khrishnamoorthi.

‘Are these your children?  God love you they had to be yours,’ he said, to laughs. ‘Is that daddy right there?’ Mommy?’  he asked.

‘We got a lot in common buddy, we both married way up,’ he said, before thanking ‘Raja for your leadership.’

Biden told the kids they could get off stage if the event got too boring. 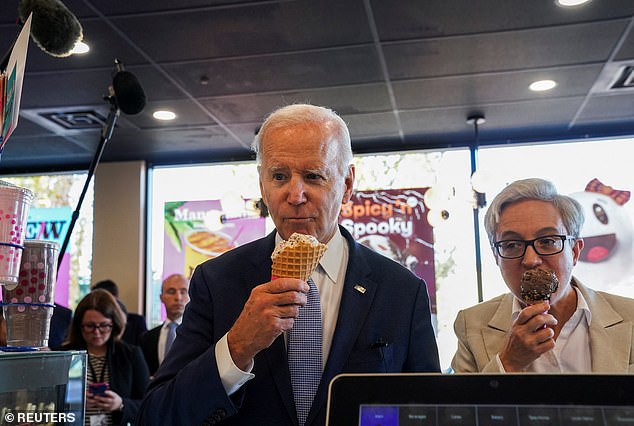 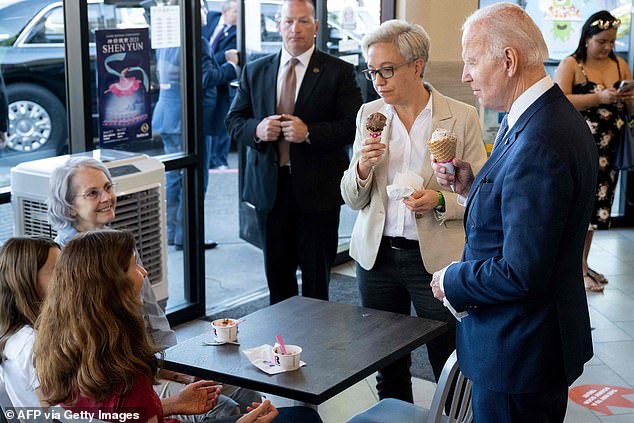 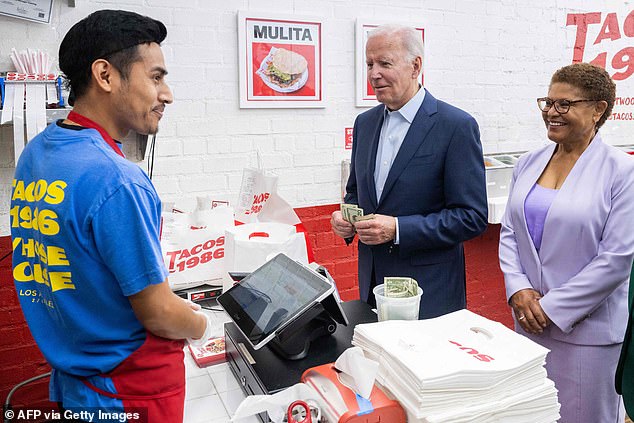 Biden paid in cash during a visit last week to Tacos 1986 in L.A. 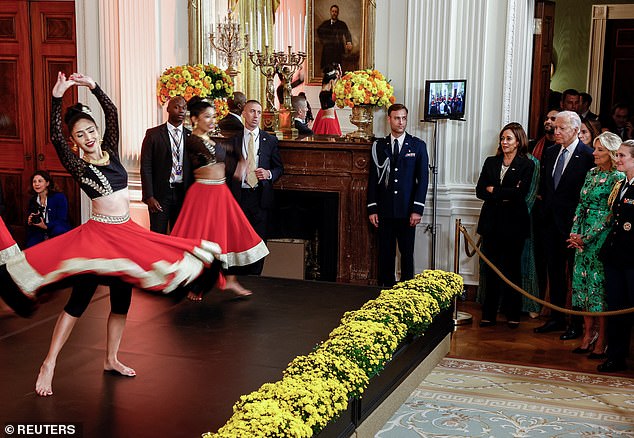 Dancers perform as U.S. President Joe Biden, Vice President Kamala Harris and first lady Jill Biden look at them during a reception to celebrate Diwali in the East Room of the White House in Washington U.S., October 24, 2022

Biden has never been at his best in big speeches, where his delivery can be stilted, his stories sometimes meandering. It’s the end of his speech that often marks the beginning of Biden’s favorite part of an event – the rope line, in the parlance of political operatives. He whirls around, scans the crowd and zeroes in on his first target for a one-on-one connection.

It might be with someone like Tim Eichinger, a Milwaukee brewery owner who asked Biden a question during a TV town hall 20 months ago, and has since had a one-on-one videoconference with the president and seen Biden send a couple of letters to his grandson.

After Biden gave a speech on student loans on Friday at Delaware State University, there were plentiful handshakes and photos with the students on stage. Last Tuesday, at a Democratic National Committee event in Washington, Biden invited one audience member backstage for a private photo, autographed some of the abortion rights signs that participants had been waving and mugged in a handful of selfies.

Aides say the 79-year-old has perfected his selfie arm, the products of which are widely shared on social media.

He has said he prefers the tactic to letting people take close-up images of him with their own phones.

At an August event for Maryland Democratic gubernatorial candidate Wes Moore, Biden spent more than 75 minutes across three different rooms greeting people after the speechmaking had ended. He drew cheers when he grabbed hold of a high school drum major’s baton and then posed with it for a photo before the marching band.

It´s all part of an approach Biden has largely perfected through decades of glad-handing in his home state of Delaware, whose population is just over 1 million and was about half that when Biden was first elected to the Senate in 1972.

Scaling that kind of personal politicking to the presidential level has been a challenge, first as Biden campaigned for the Oval Office in the COVID-19 pandemic that curtailed his public engagements and now that he´s in the White House, where the demands on his time – and the security – are greater.

The hard fact, politically, is that one-on-one warmth and empathy only go so far. They helped him forge bipartisan bonds in the Senate but from the White House, most voters, most of the time, only see the president in scripted or staged moments. Biden aides have sought out ways to show voters the president’s private interactions, with behind-the-scenes videos of some of the encounters, even if they are unlikely to ever have a chance at one themselves.

Still, Biden insists that time be built into his schedule so he can interact with people at his events – such encounters seem to energize him and help inform his policymaking.

There can occasionally be awkward moments, too, such as when a presidential quip lands poorly, that in today’s partisan environment are often broadcast online by his political rivals. But they are outnumbered by the positive interactions that have defined Biden’s career and tested the stamina of his aides.

‘He´s going to take as much time as he wants,’ added Stephen Goepfert, Biden’s former personal aide, or ‘body man.’

The president, whose poll ratings have risen in recent months but remain in negative territory, has held relatively few large political events in the leadup to midterm elections. Many Democratic candidates don’t see a Biden appearance as a plus. Aides say his schedule – and the size of his audiences – will pick up as his party pivots to get-out-the-vote efforts.

But don´t expect the small encounters to go away.

Biden, aides said, seems to detect when someone may be going through a personal or family crisis – perhaps informed by his own experiences with grief and challenge: the death of his first wife and daughter in a car crash, the loss of his son to cancer, his recovery from a pair of life-threatening brain aneurysms, a decades-long struggle to overcome a stutter.

‘He just instinctually knows how to show up for what that person needs in whatever way that is,’ said O´Malley Dillon.

As Biden works his way through a crowd, he´ll often summon an aide to take someone backstage for a photo, collect their information for follow-up, or jot down the phone number of a loved one who couldn’t be there for a surprise call from the president.

In his armored limousine after an event, Biden ‘is ready to follow up with the people he met, and he´s already making those phone calls,’ said Goepfert.

Before he became president, Biden would frequently give out his cell phone number to young people looking for advice overcoming the speech impediment. Now that he´s in the Oval Office, Biden is still in touch with many of them by phone, and sends taped feedback and words of encouragement from Air Force One.

Thirteen-year-old Brayden Harrington’s speech about how candidate Biden coached him to overcome his stutter was an emotional highlight of the 2020 Democratic National Convention.

Another 13-year-old boy, Ryan, from Arlington, Virginia, continues to trade texts and video messages with Biden through staff after meeting the president at a 2019 rally. Ryan, whose mother asked that his last name not be used, said Biden has ‘helped me be brave’ and join his school’s choir.

On another occasion, a brief Biden encounter with France´s deputy ambassador about their shared connections to Ireland yielded a touching letter to the diplomat´s ‘over the moon’ son.

Annie Tomasini, director of Oval Office operations, and her staff track Biden´s interactions and coordinate the phone calls and letters that often follow rope line meetings. Some of these relationships have been going more than a decade.

‘He takes those engagements, and they stay with him,’ Tomasini said, adding that they are reflected in Biden’s policy goals.

‘It really drives how he comes back and says, `Hey, listen, guys, we need to focus on these pieces’,´’ she said. His staff has gotten used to inquiries about specific issues that Biden hears about from Americans on the rope line or whom he’s met when leaving church.

‘It just truly is who he is,’ said O´Malley Dillon. ‘He´s been in many of the shoes that the American people are in.’

Eichinger, co-owner of Black Husky Brewing in Milwaukee, hadn’t thought much about it when Biden promised to follow up on a question he asked the president during a cable news town hall. He got a call a couple of days later from Ashley Williams, deputy director of Oval Office operations, looking to put him in touch with Biden´s economic staff for a briefing and to schedule a Zoom with Biden that ended up lasting 30 minutes.

‘I said I really didn´t expect them to do that,’ Eichinger recalled. ‘She said `No, that´s not how he is. When he says something, he expects us to follow up and to keep that relationship going.´’

Eichinger and his family later toured the White House over Christmas, and Biden sent his school-aged grandson a letter praising his violin playing after Williams showed him a video that Eichinger had sent.

‘I’m just one of 330 million people out here,’ Eichinger said. ‘They continue to feel that what I have to say is important.’

Liz Cheney is up for reelection in Wyoming. What to know about her August primary

Oscars red carpet 2021: The best fashion moments from the night