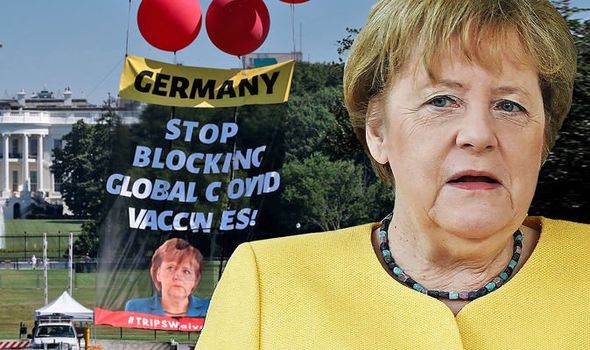 The visit between the two nations will set the tone for the future of US-German relations and will include a bilateral meeting, expanded bilateral meeting, and joint press conference. In the evening, Mr Biden and First Lady Dr Jill Biden host Ms Merkel and her husband Joachim Sauer for dinner. Ms Merkel is also expected to meet with Vice President Kamala Harris and Secretary of State Antony Blinken during her visit.

The trip comes as Ms Merkel has been urged by a leading German trade and industry body to step up and agree a free trade pact with the US.

“Germany and the EU would do well to position themselves confidently in the transatlantic relationship,” Said Siegfried Russwurm, President of German trade body BDI.

“An economically strong Europe is central to strengthening the assertiveness of Western values in the world.”

“The US and the EU must become strong partners in order to tackle major challenges such as climate change,” he added.

The ongoing dispute between Germany and the United States over the Russian gas pipeline, Nord Stream 2, is expected to be a key area of discussion between the two political giants.

President Biden and Chancellor Merkel have met on several occasions and this will be the second face to face meeting since Mr Biden was sworn in as President.

Protests have been staged in both Germany and the US urging the German leader to waive the intellectual property rights to the Covid-19 vaccine to speed up the roll-out.

After speaking with Mr Biden at the G7 summit in Cornwall, UK, earlier this year Ms Merkel said: “Meeting Joe Biden was obviously important because he stands for the commitment to multilateralism which we were missing in recent years.”

This is referring to her strained relationship with former President Donald Trump who pursued an ‘America first’ approach to diplomacy with little consideration for America’s European allies.

Mr Trump’s presidency marked a dramatic change from Ms Merkel’s relationship with previous President Barack Obama, who she considered a “partner and friend”.

Ms Merkel’s visit to the White House is likely to be her last before she steps down as Chancellor in October after 15 years in the role.

Elections to replace Ms Merkel will take place in September.