Joe Biden says it ‘remains to be seen’ if he’ll run in 2024 as he hasn’t made a ‘firm decision’: President blasts ‘irresponsible’ Donald Trump for keeping classified files at Mar-a-Lago

Joe Biden said it ‘remains to be seen’ whether he will run for a second-term in 2024 as he blasted former President Donald Trump as ‘irresponsible’ for keeping classified documents at his Mar-a-Lago home.

In a rare interview with 60 Minutes aired on Sunday, the president would not commit to running for re-election in 2024  — but said that is the plan currently.

‘My intention, as I said to begin with, is that I would run again,’ he said. ‘But it´s just an intention. But is it a firm decision that I run again? That remains to be seen.’

‘I’m a great respecter of fate. And so, what I’m doing is I’m doing my job. I’m gonna do that job,’ he continued.

‘And within the timeframe that makes sense after this next election cycle here, going into next year, make a judgment on what to do.’

The president has been benefitting from a recent bump in the polls after he pushed through the climate nd prescription drug bill.

In a poll last month, Biden saw his approval rating leap 9 percent following a slump t around 36 percent in July.

The bump comes from Democrats showing renewed enthusiasm for Biden, with 78 percent of party members now approving of the job Biden is doing. 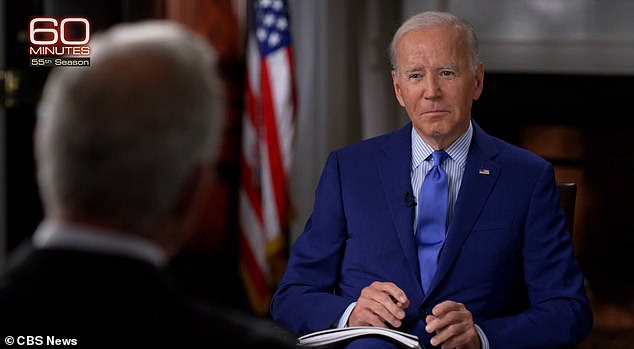 The president also used his interview with 60 Minutes to slam his predecessor for keeping classified documents in his Mar a Lago home.

Biden said that when he heard about classified documents being taken from the White House, he wondered how ‘anyone could be that irresponsible.’

‘And I thought what data was in there that may compromise sources and methods?’

The president said he did not get a heads-up before the Trump estate was searched, and he has not asked for any specifics ‘because I don’t want to get myself in the middle of whether or not the Justice Department should move or not move on certain actions they could take.’

The Federal Bureau of Investigation, meanwhile, says it took about 11,000 documents, including roughly 100 with classification markings found in a storage room and an office, while serving a court-authorized search warrant at the home on August 8.

The warrant says federal agents were investigating potential violations of three different federal laws, including one that governs gathering, transmitting or losing defense information under the Espionage Act. 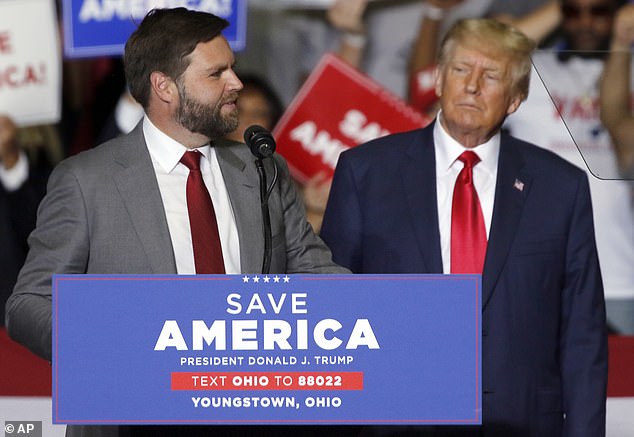 The president also slammed his predecessor, pictured here with JD Vance at a rally in Youngstown, Ohio on Saturday, for keeping classified documents at his Mar a Lago home 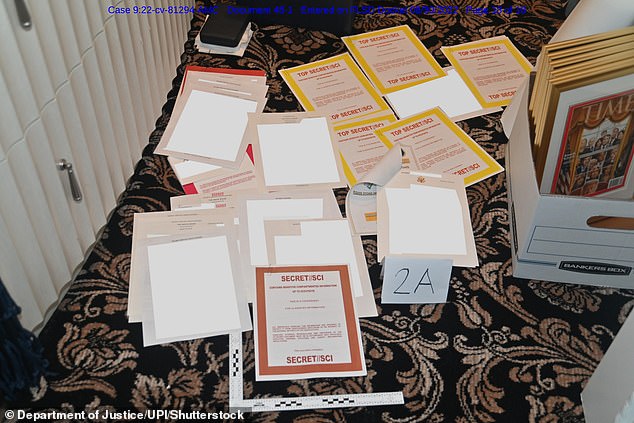 In the aftermath, Trump hired Chris Kise to serve as his attorney in the investigation into the Mar-a-Lago search and the classified documents found there.

Kise, who had been a partner at Foley and Lardner LLP, has won four cases before the US Supreme Court and is well-versed in the Florida legal system.

But before the experienced lawyer accepted the high-profile and challenging case, he insisted he was paid in advance, Politico reported on Thursday.

The money came from Trump’s campaign group, Save America PAC, to which his supporters are frequently asked to donate.

The agreement between Kise and Trump stipulated that if the case drags on, Kise can bill for more.

He could also eventually deal with of the issues surrounding a separate probe into Trump’s actions around the Capitol Riot, The Wall Street Journal said. 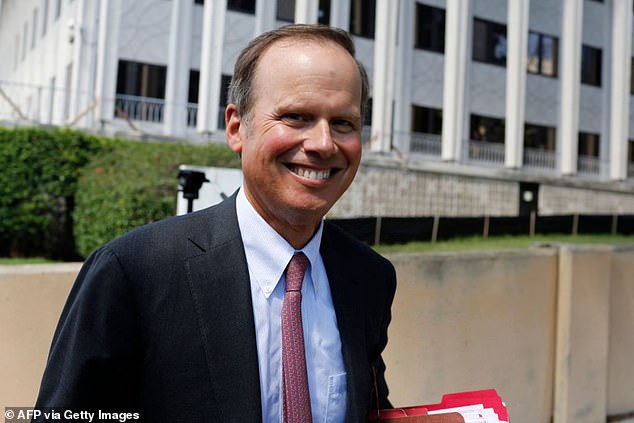 Weeks after the search, Trump lawyers asked a judge to appoint a special master to conduct an independent review of the records.

But the Department of Justice has since requested that the classified documents be withheld from the special master’s review ahead of a preliminary meeting. 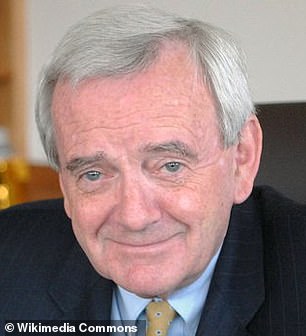 Judge Raymond Dearie (pictured) has been appointed to be the special master and has until November 30 to complete his review of the 11,000 documents

The DOJ requested the 11th US Circuit Court of Appeals to allow its own criminal investigators to review the classified information and to exclude it from Special Master Judge Raymond Dearie’s review.

The Department sought the intervention after US District Judge Aileen Cannon – a Trump appointee – declined the DOJ’s request to lift the temporary prohibition of the usage of the 100 classified documents found in the raid. The DOJ’s investigation is being stalled due to the special master’s review.

The department told the 11th Circuit in Atlanta that the judge’s hold was impeding the ‘government’s efforts to protect the nation’s security’ and interfering with its investigation into the presence of top-secret information at Mar-a-Lago. It said the hold needed to be lifted immediately so work could resume.

‘The government and the public would suffer irreparable harm absent a stay,’ Department lawyers wrote in their brief to the appeals court.

The Justice Department argues that the documents could, in no way, be Trump’s personal property, as the former president is trying to claim.

‘None of those rationales applies to the records bearing classification markings: The markings establish on the face of the documents that they are not [Trump]’s personal property,’ the DOJ said.

The request also comes as the Department of Justice and Trump’s lawyers have been called to a New York City court for a ‘preliminary conference’ by the special master who will review the 11,000 documents taken from the Mar-A-Lago raid.

Dearie has asked the two parties to attend the conference on September 20 at the Brooklyn Federal Courthouse.

Both parties have until September 19 to submit ‘proposed agenda items’ for discussion at the meeting, according to Fox News.

So which is it, Joe? Biden vows US troops WILL defend Taiwan if China invades – but White House maintains official policy of ‘strategic ambiguity’ still stands as president sits for first TV interview in seven months

Joe Biden has vowed the US military will defend Taiwan if China launches an invasion as he ramped up the rhetoric with Beijing over the tiny island nation.

The President suggested he would deploy troops to the region if Xi Jinping’s forces initiated an ‘unprecedented attack’.

But his explosive comments were quickly torpedoed by the White House, which said official policy had not changed.

An official rushed to stress the US remains ‘strategic ambiguity’ to the threat to Taiwan – as set out in the 1979 Taiwan Relations Act.

Biden’s comments mark the furthest the president has gone towards embroiling America in another global war amid rising tensions in the Far East.

It comes after he announced a $1.1billion arms package for the island and vowed to keep boosting its defense as the prospect of invasion looms. 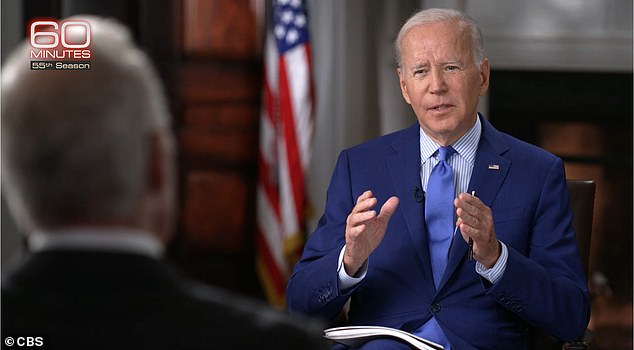 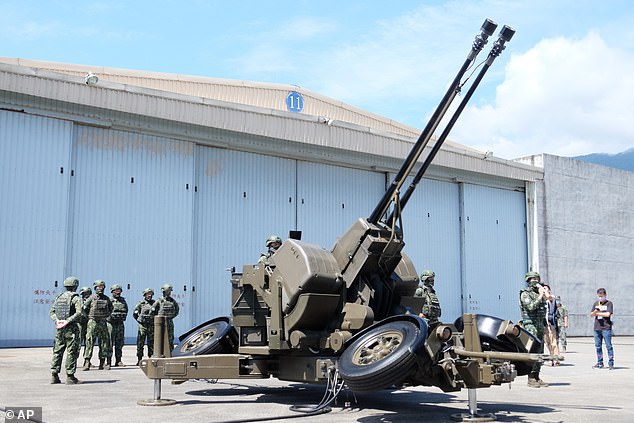 Taiwanese soldiers man an anti-aircraft gun on August 18, weeks before the US sold the island $1.1billion in military equiptment 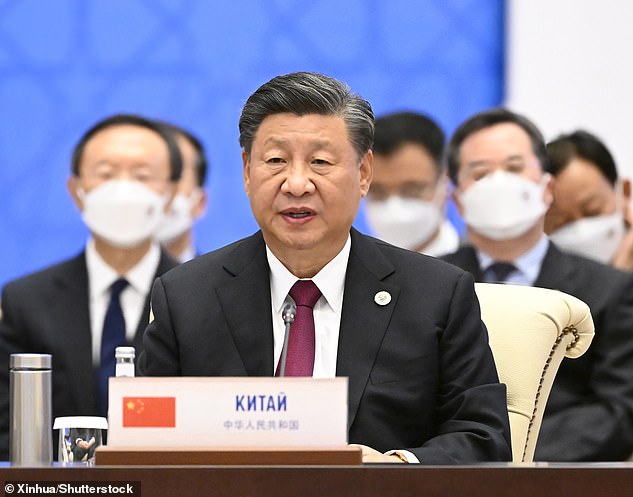 Chinese President Xi Jinping on September 16. In the 60 Minutes interview Biden said he would use military force to defend Taiwan should China invade the island

Appearing on 60 Minutes on Sunday night, Biden was asked: ‘Would U.S. forces defend the island?’

He replied: ‘Yes, if in fact there was an unprecedented attack.’

Journalist Scott Pelley said: ‘So unlike Ukraine, to be clear, sir. US forces, US men and women would defend Taiwan in the event of a Chinese invasion?’

Despite the president’s black and white comments, after the interview a White House official said the US official policy towards the defense of Taiwan – the ‘strategic ambiguity’ outlined in the 1979 Taiwan Relations Act – remained unchanged.

‘The President has said this before, including in Tokyo earlier this year,’ the official said. ‘He also made clear then that our Taiwan policy hasn’t changed. That remains true.’

The president also seemed to reference the Taiwan Relations Act in the interview, saying the policy the US had maintained towards Taiwan for years remained in place.

‘We agree with what we signed onto a long time ago,’ Biden said in the interview. ‘And that there’s one China policy, and Taiwan makes their own judgments about their independence. We are not moving – we’re not encouraging their being independent. We’re not – that – that’s their decision.’

The Taiwan Relations Act requires that the US provide Taiwan with munitions to defend itself should it be needed.

Adherence to that stipulation resulted in the State Department’s sale of $1.1 billion in military equipment to Taiwan just this month.

‘This package was in the works for some time precisely because we expected it would be needed as China increased its pressure on Taiwan,’ a State Department spokesperson said on September 6.

‘We have and we will continue to be responsible, steady, and resolute and keep our lines of communication open with Beijing, but also continue to support Taiwan in consistent – in ways that are consistent with our policy.’ 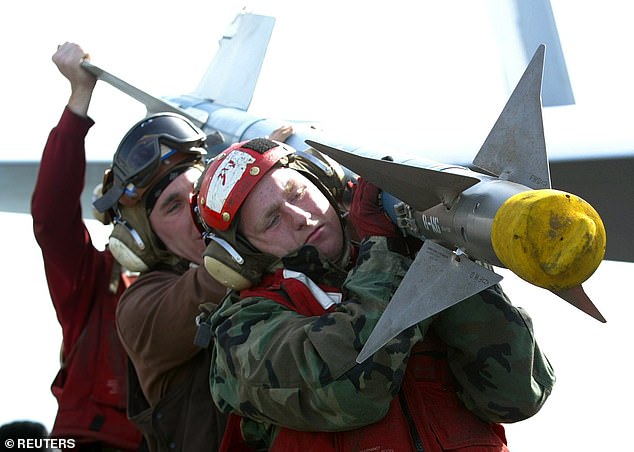 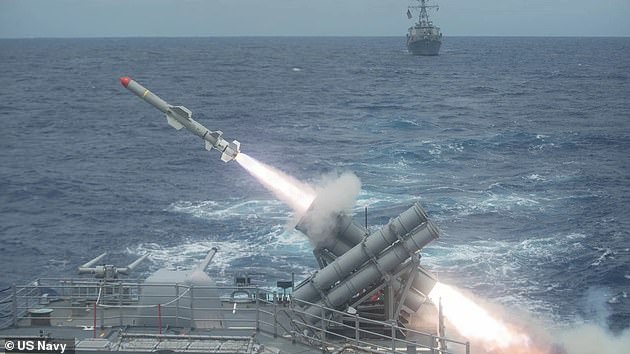 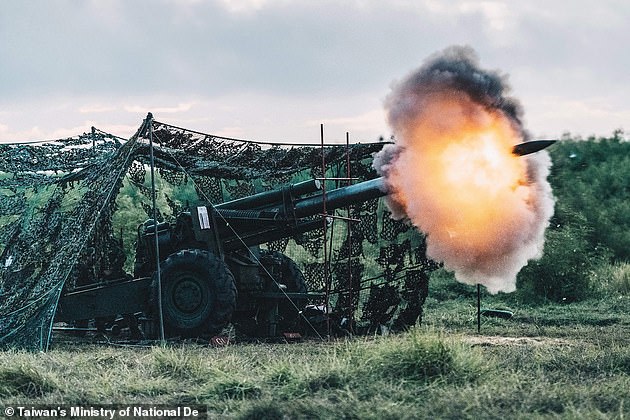 After the sale, China called Taiwan an ‘inalienable’ part of its territory, said the United States to should ‘immediately revoke’ the arms sales.

‘It sends wrong signals to ‘Taiwan independence’ separatist forces and severely jeopardizes China-US relations and peace and stability across the Taiwan Strait,’ said Liu Pengyu, spokesman for the Chinese embassy in Washington.

‘China will resolutely take legitimate and necessary counter-measures in light of the development of the situation,’ he said.

The sale came a month after House Speaker Nancy Pelosi defiantly visited the self-governing democracy, prompting mainland China to launch a show of force that could be a trial run for a future invasion.

The package – the largest for Taiwan approved under President Joe Biden’s administration – includes $665 million for contractor support to maintain and upgrade a Raytheon early radar warning system in operation since 2013 that would warn Taiwan about an incoming attack.

Taiwan spent some $355 million to buy 60 Harpoon Block II missiles which can track and sink incoming vessels if China launches an assault by water.

The arms also include $85.6 million for more than 100 Sidewinder missiles, a mainstay of Western militaries for their air-to-air firepower. 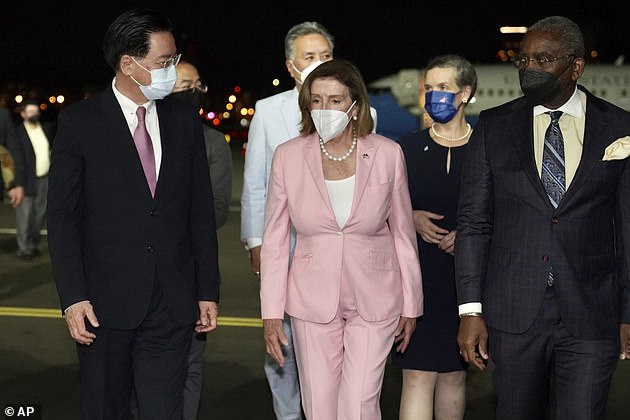 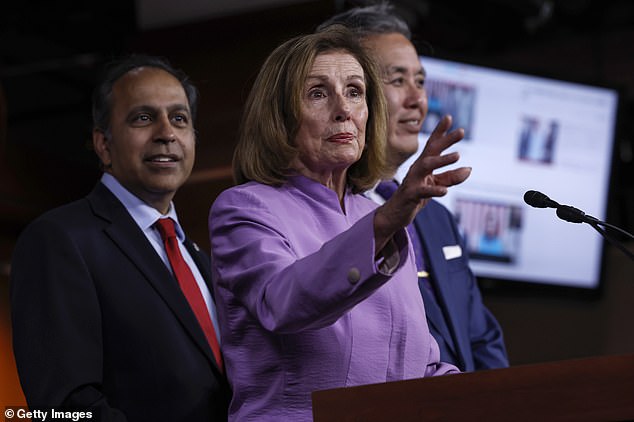 Pelosi defended the trip that has provoked Chinese ire and a slew of threats and military drills: ‘Our purpose in going to Taiwan was to say that we have this strong relationship built on the status quo, which we support’

A spokesperson for the State Department, which approved the sale, said the package was ‘essential for Taiwan’s security’ and stressed that the United States still recognized only Beijing and not Taipei.

‘We urge Beijing to cease its military, diplomatic and economic pressure against Taiwan and instead engage in meaningful dialogue with Taiwan,’ the spokesperson said.

‘[The sales] are routine cases to support Taiwan’s continuing efforts to modernize its armed forces and to maintain a credible defensive capability,’ the spokesperson said on condition of anonymity in line with protocol.

‘The United States will continue to support a peaceful resolution of cross-Strait issues, consistent with the wishes and best interests of the people on Taiwan,’ he said.

China’s nationalists set up a rival government in Taiwan in 1949 after losing the mainland’s civil war although the island has since blossomed into a vibrant democracy and major technological hub.

Since then, China has considered Taiwan a province awaiting reunification, by force if necessary.

Russia’s invasion of Ukraine raised growing questions on whether China may follow suit in Taiwan and whether the island was equipped to defend itself.

In a July, CIA chief Bill Burns said that Chinese President Xi Jinping was still determined to assert control over Taiwan but that Russia’s woes in Ukraine may have prompted Beijing to wait and make sure it can have an overwhelming military advantage.

For Yazidi survivors of Islamic State killings, the nightmares go on