Joe Biden’s favorability has reached an all time low of his administration as just over four in 10 Americans say they feel the president is doing a good job in a new poll released Sunday.

The ABC News/Washington Post poll shows Biden at 53 per cent disapproval and 41 per cent approval – down 11 points from the same poll in April.

The swift slide comes amidst a series of failures mostly related to the economy, including a 31-year high inflation rate, continued high unemployment numbers and a supply chain crisis just in time for the holiday season.

Of the 1,001 adults surveyed between November 7-10, seven in 10 say the economy is in ‘bad shape’, which is up from 58 per cent who said the same in the poll taken in the spring.

While 48 per cent of respondents say they blame Biden directly for inflation, Biden has 55 per cent disapproval and only 39 per cent approval for his handling of the economy overall – a six point drop since early September and a massive 13 point drop from April.

The president’s overall approval rating is very similar to his ratings related to the economy.

When Trump hit a low economic approval, Republicans lost a whopping 40 seats in the House in the 2018 midterm elections – an eerie premonition as Democrats try to hold on to their slim majorities in Congress going into the 2022 midterms. 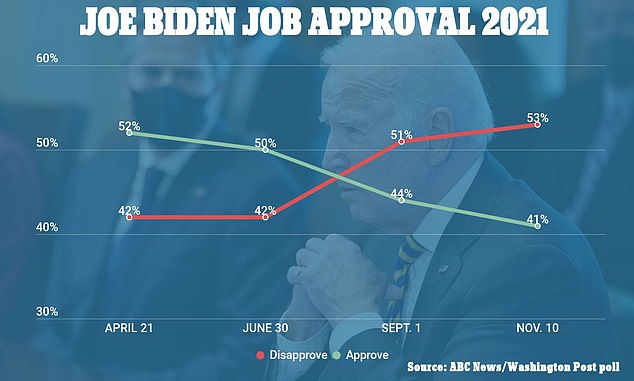 Joe Biden’s approval rating continues to dive in the midst of economic crises, dipping to 41% in a new poll from 11 points higher in April

If the midterms were held today, the poll found that 51 per cent of registered voters would support a Republican candidate in their congressional district, while only 41 per cent say they would support a Democrat.

This figure is the biggest lead for the GOP in 40 years – since the ABC/Post poll started asking this question in November 1981.

Evidence of the shift is the recent gubernatorial race in Virginia earlier in November when GOP newcomer Glenn Youngkin scored a win over former Democratic Governor Terry McAuliffe in a state Biden won by 10 points in 2020 and has been increasingly going blue the last few elections.

Despite Biden scoring a win after Congress finally passed the $1.2 trillion bipartisan infrastructure bill earlier this month, the victory gave him no bump in approval, which could lead his administration to push even harder for passage of his Build Back Better agenda that includes massive social and welfare spending.

The poll also shows that many of Biden’s keystone policies are much more popular than he is.

There is 63 per cent favorability toward the infrastructure bill and 58 per cent support for the $2 trillion spending bill still under debate in Congress.

Just 31 per cent of adults feel that Biden is keeping his major campaign promises – and only 35 per cent feel he has accomplished much overall as president so far.

The poll of 1,001 adults has a margin of error of 3.5 percentage points and includes responses from 882 registered voters.

Hikers call 911 after capturing video of paraglider falling toward ground

Marriott says its database hacked affecting up to 500 million