That takes the biscuit! Crunchy teatime treat is our favourite sugary snack… beating chocolate and cakes to the title

Whether it’s dunking a digestive or snacking on shortbread, we all have our favourites.

But it seems there’s one thing the nation can agree on – that biscuits are its number one sugary snack.

A survey ranked them in first place, just ahead of chocolate bars. 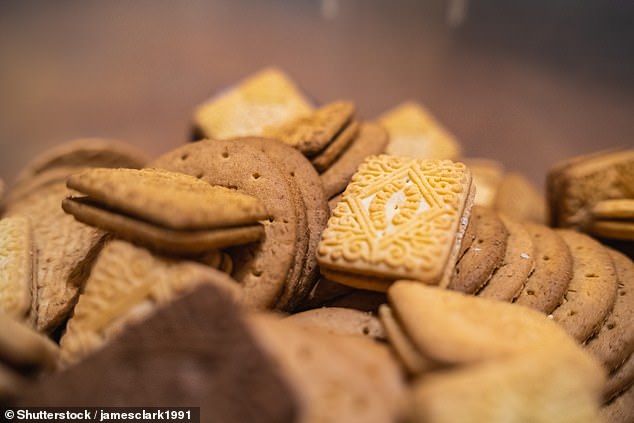 A survey has ranked biscuits as Britain’s number one sugary snack, just ahead of chocolate bars

But the poll may leave a bitter taste in the mouths of some – because when selection boxes are included, chocolate comes out on top, with 50 per cent of Britons ‘prone to’ snacking on it.

And for women alone, a bar of choc was also the most popular treat, on 44 per cent. Meanwhile, men were more likely to enjoy their chocolate in unusual places – with 10 per cent confessing to having scoffed it while sitting on the toilet.

Around 2,000 Britons were asked whether they were partial to various snacks in the poll for the British Heart Foundation.

Forty two per cent of both men and women named biscuits, while 40 per cent liked to tuck into chocolate bars.

The poll showed that 45 per cent snacked out of boredom – more than the number nibbling from hunger.

Britons were most likely to reach for sweet treats between 8pm and 9pm. 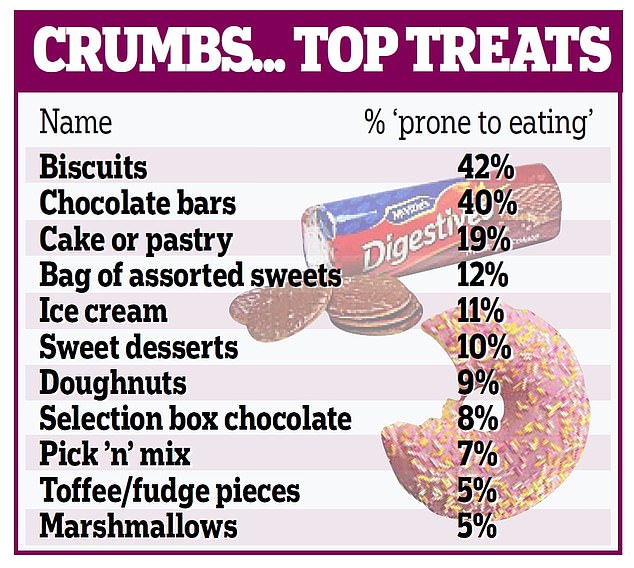 And more than a quarter mentioned staying inside more – perhaps due to lockdown – as an excuse for snacking.

The results exposed a bizarre generational divide, with 12 per cent of 16 to 34-year-olds saying they had eaten chocolate with a knife and fork, compared with just 1 per cent of the over-55s.

The survey was carried out as part of the Dechox Challenge campaign, which asks people to give up chocolate for the whole of next month to help raise money for life saving British Heart Foundation research.

Cake and pastry came third, on 19 per cent, while sweets were fourth with 12 per cent. Emma Day, of the British Heart Foundation, said: ‘It’s clear the UK’s partiality to a sugary snack is at an all-time high.’