Border agents rescued a Mexican national who got stuck on the border wall in California while trying to enter the U.S. illegally, authorities said Wednesday.

Agents patrolling Imperial Beach found the 25-year-old man hanging from a part of the wall that juts out into the Pacific Ocean at around 8:15 p.m. Tuesday, U.S. Customs and Border Protection (CBP) said in a statement.

The migrant had tried to scale down the U.S. side of the barrier and got stuck above the waterline, the agency said. Mexican authorities dislodged the man, while the CPB agents brought the man to safety. 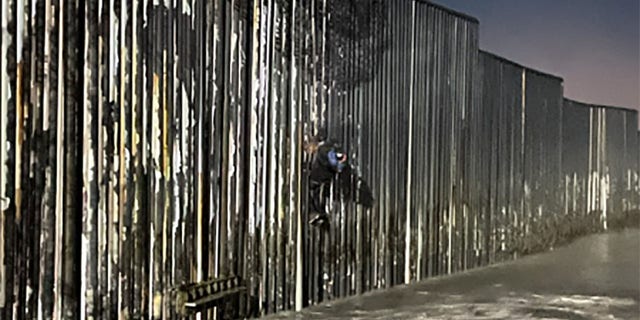 The 25-year-old Mexican national spotted hanging from a part of the wall that jutted into the Pacific Ocean, the agency said.
(U.S. Customs and Border Protection)

He was taken to a hospital and treated for hypothermia and knee pain, according to authorities.

While the agency did not immediately say whether the man had been left behind by a human smuggler, it warned of the dangers posed by such traffickers.

"Let this serve as a grave reminder," Chief Patrol Agent Aaron Heitke said in a statement. "A smuggler’s sole motive is profit. When the going gets tough, they will leave you hanging, both literally and figuratively.  Our agents will always preserve lives whenever possible."

The Trump administration announced earlier this month that 70,000 migrants were apprehended at the southwest border in November, a 64% increase compared to 2019.

Acting CBP Commissioner Mark Morgan told reporters at the time that the increase, which saw an average of 2,300 encounters a day in November, was mainly made up of single adult males from Mexico.

Morgan added there has been an increasing number of families and unaccompanied children (UACs) from the Northern Triangle countries in recent months.