Hopefully there’s no meltdown: Boris Johnson pledges to build a nuclear reactor EVERY year to ‘to wean’ Britain off Russian oil and gas as he tours nuclear power station… and grabs an ice cream

Boris Johnson has announced he wants to build a new nuclear power station every year to reduce Britain’s dependence on fossil fuels – including oil and gas supplied by Russia.

The station, which began producing electricity in 1983, is due to close in 2024. However, Hartlepool has been designated as one of eight sites the government has set its sights on for future nuclear energy plants.

The Prime Minister tweeted: ‘Nuclear power stations like the one I visited in Hartlepool today are absolutely crucial to weaning us off fossil fuels, including Russian oil and gas.

‘Instead of a new one every decade, we’re going to build one every year, powering homes with clean, safe and reliable energy.’ 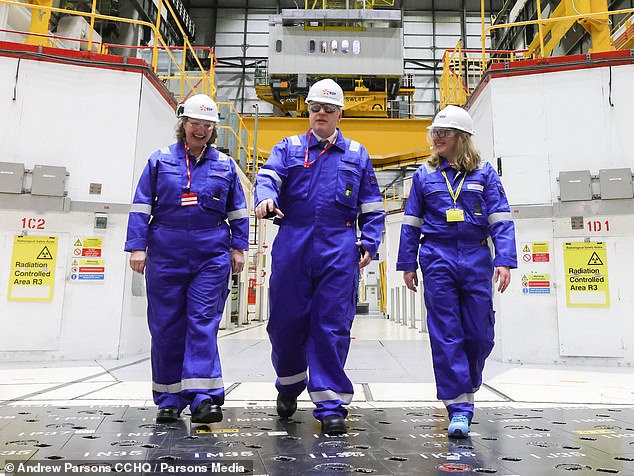 The strategy proposes to build up to eight nuclear plants to generate around a quarter of projected electricity demand by 2050.

The ambitious plan include a target to create 95 per cent of Britain’s electricity from nuclear and renewable sources by 2030 – up from 55 per cent at present.

The Government hopes the strategy will make Britain a net energy exporter by the end of the decade, and help protect the country’s economy from global energy price shocks.

The Prime Minister was backed by Business Secretary Kwasi Kwarteng in finalising the plan after weeks of wrangling, with Chancellor Rishi Sunak’s objections about the cost of nuclear ultimately overruled.

A source said: ‘The PM and Business Secretary won on nuclear.’

The strategy also includes plans to launch a licensing round for new North Sea oil and gas projects this summer to reduce reliance on imports.

And it contains an ambition to double low-carbon hydrogen production capacity by 2030 to replace gas in the longer term. 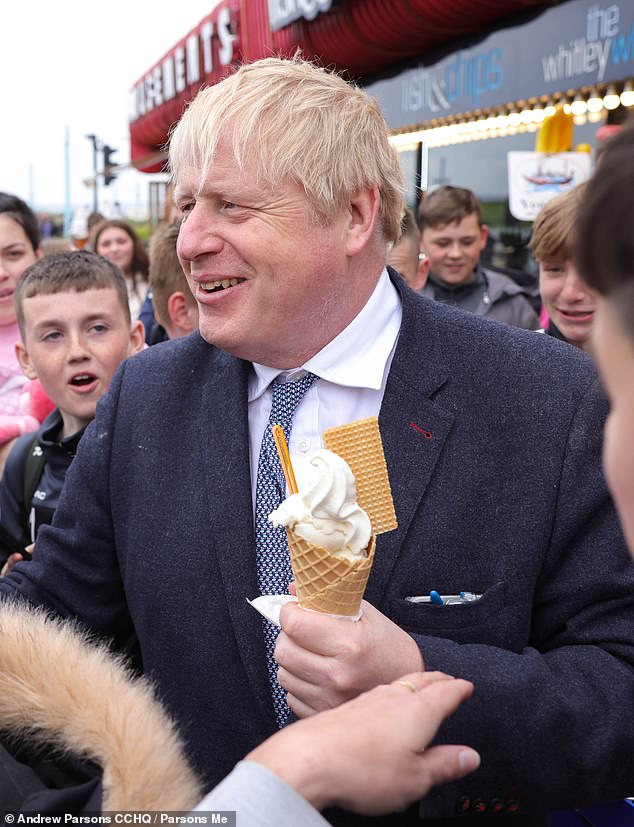 After visiting Hartlepool, the Prime Minister also spent part of the day canvassing in Whitley Bay, in North Tyneside 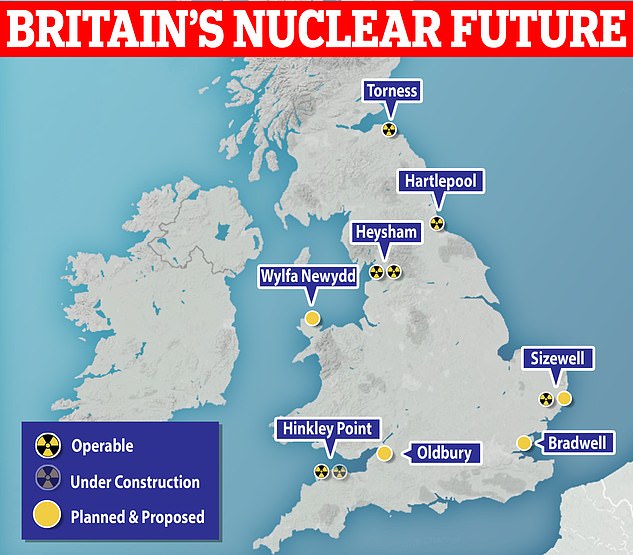 Above: Plans and proposals for new nucelar power plants around the UK, with as many as eight by 2050. The ambitious Energy Security Strategy proposals include a target to generate 95 per cent of Britain’s electricity from nuclear and renewable sources by 2030 – up from 55 per cent at present.

In March, Mr Johnson drew criticism after visiting Saudi Arabia to beg it to increase oil production, in the hope that it will would UK petrol prices and help British consumers hit by increases linked to the war in Ukraine.

He was accused of going from ‘dictator to dictator’ to shore up UK energy supplies, with Saudi Arabia criticised for killing 81 ‘criminals’ over the previous weekend.

At the time, the Prime Minister said: ‘We discussed everything that you would expect, so I raised human rights, but we also talked about what we can do to stabilise oil prices, to fight inflation, to help consumers, to help people at the gas pumps, at the petrol pumps.’

The Centre for Economics and Business Research (CEBR) has predicted that household energy bills will continue to rise until 2026 as the government continues to get to grips with securing the country’s energy supply.

Douglas McWilliams, deputy chairman of the CEBR, said: ‘People can put up with high costs if only for a short period, but what our model suggests is, unless the Ukraine situation resolves itself, prices are likely to be high but falling for three or four years.’

Mr McWilliams said he believes it will not change at all until Britain gets a grip on its energy security, particularly for gas.