Oregon firefighters have a tiny but powerful Force on their side in their fight against wildfires, thanks to a five-year-old boy who sent them his Baby Yoda doll.

Carver Tinning and his grandmother Sasha bought the lifelike Star Wars toy for a firefighter donation drive in Scappoose, Ore., amid the state’s devastating wildfire season. They also donated various canned goods, but Carver specifically chose to send the doll as a bit of emotional support for the fire crews. 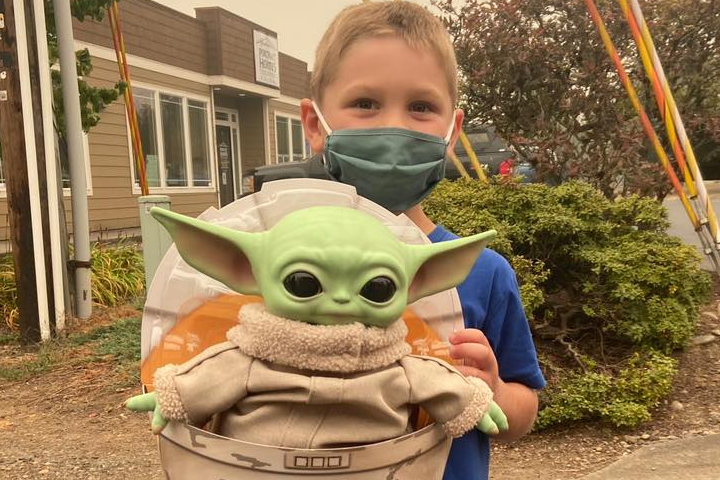 “Thank you firefighters,” Sasha Tinning wrote in a note attached to the doll, on behalf of Carver. “Here is a friend for you, in case you get lonely. Love, Carver.”

The doll was an instant hit at the donation drive.

“There wasn’t a dry eye at the trailer when he dropped off the Baby Yoda with his note,” Tyler Eubanks, the donation organizer, told KGW-TV. “I knew I had to get that to the firemen.”

The adorable little Star Wars character became a viral sensation last fall with the debut of The Mandalorian, a show on Disney Plus. The series follows a fierce bounty hunter who finds himself caring for a little tyke known as “The Child.” The glassy-eyed little creature is an infant from the same species as Jedi Master Yoda, and “Baby Yoda” has since become his nickname.

The Oregon firefighters welcomed their own version of “The Child” by turning him into a mascot and social media sensation. They wrapped his head in an American flag bandana and carted him along to various firefighting efforts, where they’ve been taking photos with him and posting them online.

A Facebook group about the doll’s adventures has amassed more than 24,000 followers since the doll first arrived in mid-September. Various images show the doll accompanying firefighters on the job, while highlighting everything the crews are doing to stop the disastrous fires on the U.S. West Coast.

The doll and the note are being passed among fire crews on the front lines.

Eubanks says the note is staying with Baby Yoda so firefighters will know that there are people at home who appreciate their work.

“What makes me the most happy is that it’s bringing happiness to people putting their lives on the line,” Tinning said. “Anybody that holds Baby Yoda and looks in those big eyes knows that eventually this will all pass and be OK.”

This is the way.