Brasilia: Leftist leader Luiz Inacio Lula da Silva was sworn in as president of Brazil on Sunday in the country’s Congress at the start of his third presidency. 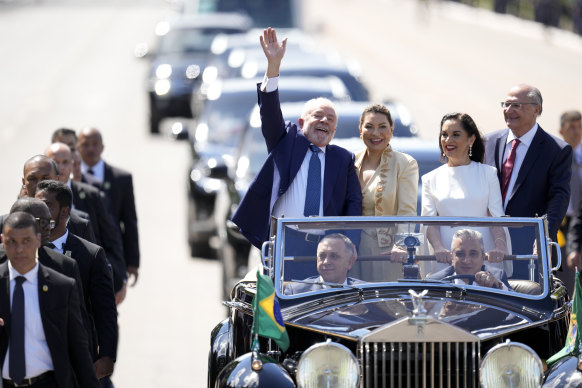 President-elect Luiz Inacio Lula da Silva, left, his wife Rosangela Silva, second from left smile from an open car after departing from the Metropolitan Cathedral to Congress for their swearing-in ceremony, in Brasilia.Credit:AP

His victory marks the culmination of a political comeback sure to thrill supporters and enrage opponents in a fiercely polarised nation.

But Lula’s presidency is unlikely to be like his previous two mandates, coming after the tightest presidential race in more than three decades in Brazil and resistance to his taking office by some of his opponents, political analysts say.

The leftist defeated far-right President Jair Bolsonaro in the October 30 vote by less than 2 percentage points. For months, Bolsonaro had sown doubts about the reliability of Brazil’s electronic vote and his loyal supporters were loath to accept the loss. 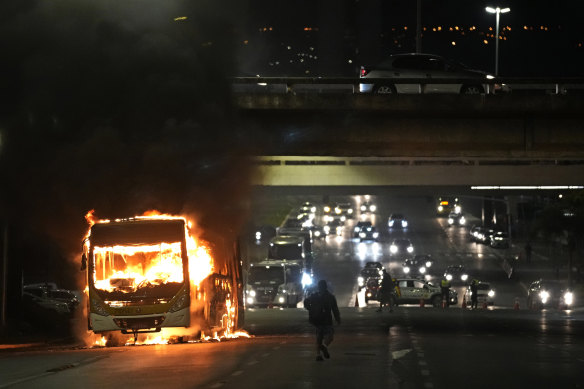 Supporters of Brazilian President Jair Bolsonaro clash with police setting fire to several vehicles and allegedly trying to storm the headquarters of the Federal Police in Brasilia on December 12.Credit:AP

Many have gathered outside military barracks since, questioning results and pleading with the armed forces to prevent Lula from taking office.

His most die-hard backers resorted to what some authorities and incoming members of Lula’s administration labelled acts of “terrorism” – something the country had not seen since the early 1980s, and which have prompted growing security concerns about inauguration day events.

“In 2003, the ceremony was very beautiful. There wasn’t this bad, heavy climate,” said Carlos Melo, a political science professor at Insper University in Sao Paulo, referring to the year Lula first took office. “Today, it’s a climate of terror.”

Tanya Albuquerque, a student, flew from Sao Paulo to Brasilia and had tears in her eyes as she heard local leftists celebrating incoming visitors at Brasilia’s airport. She decided to attend after seeing pictures of Lula’s first inauguration.

“Maybe we won’t have 300,000 people tomorrow like then; these are different and more divisive times. But I knew I wouldn’t be happy in front of a TV,” Albuquerque, 23, said on Saturday.

Lula has made it his mission to heal the divided nation. But he will have to do so while navigating more challenging economic conditions than he enjoyed in his first two terms, when the global commodities boom proved a windfall for Brazil. 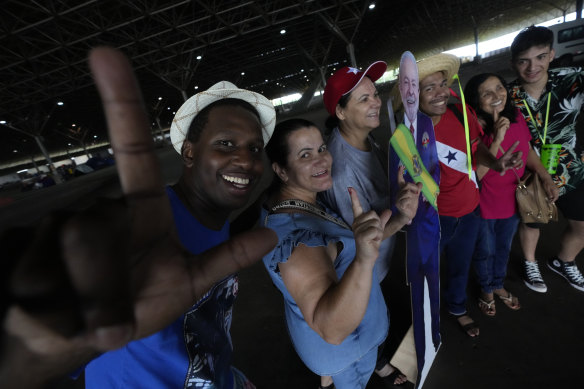 Supporters make an “L” of Lula hugging a replica of Brazilian President-elect Luiz Inacio Lula da Silva, in a camp of supporters of the president-elect, in Brasilia on December 31.Credit:AP

At the time, his administration’s flagship welfare program helped lift tens of millions of impoverished people into the middle class. Many Brazilians travelled abroad for the first time. He left office with a personal approval rating of 83 per cent.

In the intervening years, Brazil’s economy plunged into two deep recessions – first, during the tenure of his handpicked successor, and then during the pandemic – and ordinary Brazilians suffered greatly.

Lula has said his priorities are fighting poverty, and investing in education and health. He has also said he will bring illegal deforestation of the Amazon to a halt. He sought support from political moderates to form a broad front and defeat Bolsonaro, then tapped some of them to serve in his cabinet.

Given the nation’s political fault lines, however, it is highly unlikely Lula ever reattains the popularity he once enjoyed, or even sees his approval rating rise above 50 per cent, said Mauricio Santoro, a political science professor at Rio de Janeiro’s State University. 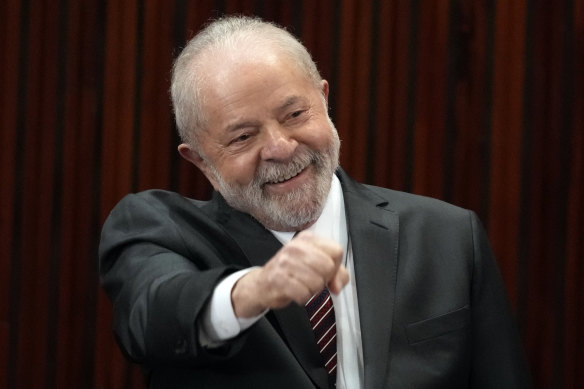 Furthermore, Santoro said, the credibility of Lula and his Workers’ Party were assailed by a sprawling corruption investigation. Party officials were jailed, including Lula – until his convictions were annulled on procedural grounds. The Supreme Court then ruled that the judge presiding over the case had colluded with prosecutors to secure a conviction.

Lula and his supporters have maintained he was railroaded. Others were willing to look past possible malfeasance as a means to unseat Bolsonaro and bring the nation back together. 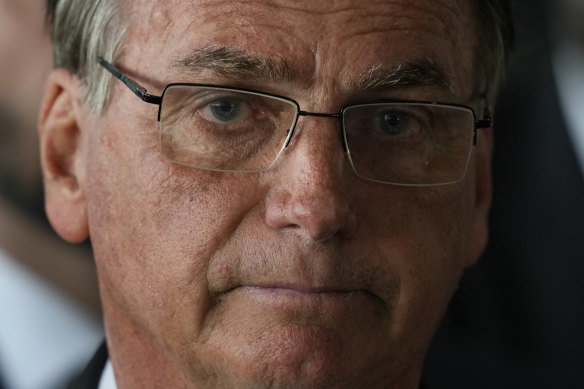 Former Brazilian President Jair Bolsonaro looks on after speaking from his official residence the Alvorada Palace in Brasilia on November 1.Credit:AP

But Bolsonaro’s backers refuse to accept someone they view as a criminal returning to the highest office. And with tensions running hot, a series of events has prompted fear that violence could erupt on inauguration day.

On December 12, dozens of people tried to invade a federal police building in Brasilia, and burned cars and buses in other areas of the city. Then on Christmas Eve, police arrested a 54-year-old man who admitted to making a bomb that was found on a fuel truck headed to Brasilia’s airport.

He had been camped outside Brasilia’s army headquarters with hundreds of other Bolsonaro supporters since November 12. He told police he was ready for war against communism, and planned the attack with people he had met at the protests, according to excerpts of his deposition made public by local media. The next day, police found explosive devices and several bulletproof vests in a forested area on the federal district’s outskirts.

Lula’s incoming Justice Minister, Flavio Dino, this week called for federal authorities to put an end to the “antidemocratic” protests, calling them “incubators of terrorists”. 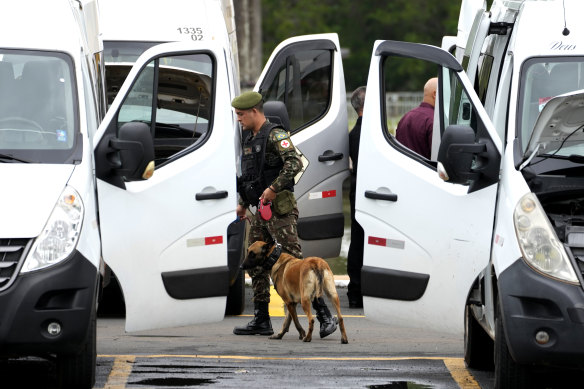 Security agents carry out bomb inspections in vehicles that will be used for Sunday’s Inauguration Day a day beforehand.Credit:AP

In response to a request from Lula’s team, the current justice minister authorised deployment of the national guard until January 2, and Supreme Court justice Alexandre de Moraes banned people from carrying firearms in Brasilia during these days.

“This is the fruit of political polarisation, of political extremism,” said Nara Pavao, who teaches political science at the Federal University of Pernambuco. Pavao stressed that Bolsonaro, who mostly vanished from the political scene since he lost his re-election bid, was slow to disavow recent incidents.

Bolsonaro finally condemned the bomb plot in a December 30 farewell address on social media, hours before flying to the US. His absence on inauguration day will mark a break with tradition and it remains unclear who, instead of him, will hand over the presidential sash to Lula at the presidential palace.

Lawyer Eduardo Coutinho will be there. He bought a flight to Brasilia as a Christmas present to himself.

“I wish I were here when Bolsonaro’s plane took off, that is the only thing that makes me almost as happy as tomorrow’s event,” Coutinho, 28, said after singing Lula campaign jingles on the plane. “I’m not usually so over-the-top, but we need to let it out, and I came here just to [do] that. Brazil needs this to move on.”

Snowy Sunday forces many to dig out in the Kingston area